I always wonder , how does this happen in some games.
A very fit young person gets a knock & then passes away.

I know it used to happen a bit in Rugby Union years ago.
Especially during scrum collapses.

But he did complain of Flu like symptons.. It could have been Sepsis

RIP Tory Brunning .. his body will be flown back to Aotearoa

Tory Brunning was playing for the Dapto Canaries rugby league team in Illawarra, on the NSW south coast, when he became sick and retired from the match on Saturday.

The New Zealand native was picked to play each of the back to back games but was pulled from the line up as his health deteriorated, complaining of flu-like symptoms.

The promising football prospect was found collapsed in the dressing rooms after being looked at by the opposing team's doctor after the first game finished.

Paramedics attended the Dapto Showground about 4:45pm however they were unable to revive him despite their best efforts.

His cause of death is yet to be determined however a report will be prepared for the Coroner.

His heartbroken sister shared her emotional outpouring of love for her younger sibling, following his shock death.

'My baby brother was a star in this family — he was doing so well,' Kourtney Waitarehu said, according to the Courier Mail.

'A piece of our heart has been taken from us all and may he rest in Our Lord's arms.'

Mr Brunning had moved across the Tasman to Australia to pursue his dreams of playing rugby league.

'He went from regional football to national New Zealand football and just kept rising — he just had a passion for rugby league,' Ms Waitarehu said.

'A star in our eyes and taken in a blink. How beautiful God made you — a piece of my heart.'

A service for the young man will be held in Wollongong and then he will be moved home to be laid to rest in Waitara, Taranaki.

The expense to take Mr Brunning back to New Zealand is costly, prompting his family to make a Give A Little page and ask for supporting funds.

'The funds will be used to pay for the expenses involved in transporting Tory from Australia to New Zealand.

'Any surplus will be used to help pay for his tangi (funeral) and headstone,' the page states. 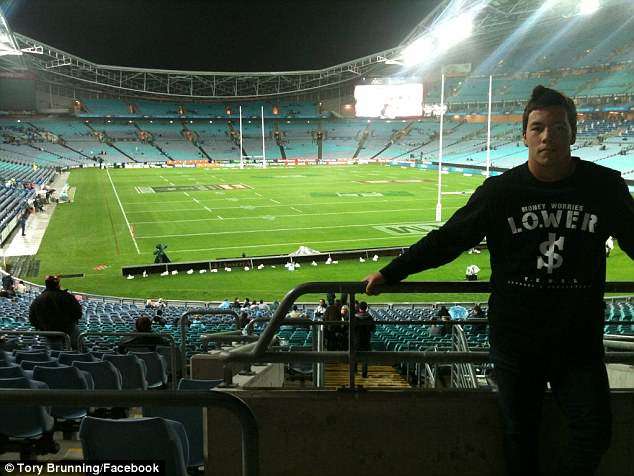