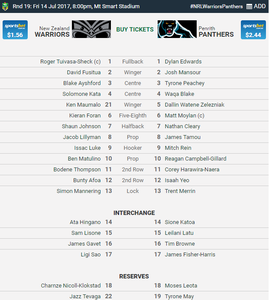 Tied on 18 competition points and sitting two wins outside of the NRL Telstra Premiership top eight, Friday night in Auckland shapes as a pivotal match to the 2017 hopes of both the Warriors and Penrith Panthers.

While Stephen Kearney's side enjoyed the week off with a bye, Penrith ground out a tough 16-8 victory over the fourth-placed Manly Sea Eagles, which keeps them right in the play-off frame.

Prop Albert Vete (arm) and hooker Nathaniel Roache (hamstring) are both out with injuries sustained in Round 17, but the home side get a boost via the return of Kiwi internationals Solomone Kata and Issac Luke.

Sam Lisone returns to the bench, with Bunty Afoa named to start in the second row.

Penrith maintain a settled line-up, with James Fisher-Harris's return on the bench in the place of Sitaleki Akauola the only change made by Anthony Griffin.

The match has taken on a new dimension for the Warriors after it was announced mid-week that Manu Vatuvei will depart for Salford in the Super League, with the club renaming the venue 'Manu Vatuvei Stadium' for Friday night, in recognition of his farewell match.

Why the Warriors can win: Heading into Round 19 the Warriors complete better than any other team in the NRL, with an average completion rate of 79.39 per cent through 16 games. Ball retention has been a huge positive for them this year, and five of their seven wins so far have coincided with them completing 82 per cent or more of their sets. This could give the Kiwi side a huge leg up against a Penrith team who have managed to complete more than 77 per cent of their sets only five times this season.

Why the Panthers can win: Recent form suggests defence could be an area the visitors have an edge in. In five of their last six games Penrith have kept teams to 20 points or less, and most recently they restricted the NRL's equal-best attacking team, Manly, to just two tries and eight points. The Panthers haven't always shown up with the right attitude off the ball this season, but when they do they can be tough to break down.
‌
The History: Played 38, Warriors 17 wins, Panthers 21 wins, one draw. The overall head-to-head record favours Penrith and so does the recent one, with seven wins from their last nine against the Warriors. They have tended to be close matches of late, with 14 points being the biggest winning margin in the last four encounters. On New Zealand soil the Panthers have won 50 per cent of the time across 18 matches.

What are the odds: It's a fairly even betting game with Sportsbet reporting only slightly more dollars invested on the Warriors in the head-to-head market. Both sides have been backed to win 1-12 so the money suggests we’re in for a tight contest.

NRL.com predicts: At home the Warriors were always going to be hard to beat in this one, and with the added motivation of giving Manu Vatuvei something to celebrate in his farewell, the Kiwi outfit should be able to get up for a vital win. Warriors by seven.

I have decided to rename today from Friday to Manu Vatuveiday
Reactions: Vancent, Viking, Warrior2017 and 10 others

Was feeling confident until I saw who the senior video review official is.... now, not so!!!!

An old cliche, but every game between now and the end of the season needs to be at the intensity of a play off game. Ever the optimist about everything, I'll go for a win by 4 points
Reactions: mt.wellington and Defence

Fundamentals, possession, position and pace, has worked for rugby players of either code for hundreds of years. Add in pride in defence and you can get there.

Gizzyfan said:
Fundamentals, possession, position and pace, has worked for rugby players of either code for hundreds of years. Add in pride in defence and you can get there.
Click to expand...

I thought moylan was out injured?
Reactions: bruce

It's been colder in Penrith down to 2 degrees over night and a touch warmer than Auckland during the day, not much difference really

But besides the weather the Warriors should be able to put Penrith away
Last edited: Jul 14, 2017

Raw Power said:
It's been colder in Penrith down to 2 degrees over night and a touch warmer than Auckland during the day, not much difference really
Click to expand...

Gees jonno, as our resident weather expert, how could you not know that? I'm losing faith in you bro!!!
Reactions: matiunz, jonno, mt.wellington and 2 others

It's dam cold at the Mount and don't Panthers prefer warmer weather when they go looking for prey Come on guys Give Manu the send off that he so deserves and take it out by 6
Reactions: jonno, Raw Power, Miket12 and 1 other person

Contributor
Gonna be a sad day seeing Manu Vatuvei at the park one last time. Wouldn't miss this game for the world...
Reactions: Warrior2017, Raw Power, 3rdstriker and 3 others

mt.wellington said:
Gonna be a sad day seeing Manu Vatuvei at the park one last time. Wouldn't miss the chance to get his last Warriors jersey for the world...
Click to expand...

Fixed that for you
Reactions: Afakasi247, Raw Power, danyooll and 6 others

Manu's last game and he ain't even playing LMAO Only at the Warriors..

I'll be raising a glass to the Beast thats for sure, if its typical Warrior send off we lose by plenty but surely it should bring out the best in them, 13+
Reactions: Raw Power and Defence

Contributor
For anyone going to the game tonight, this new app from vodafone looks good.

I will be trying out to see how it goes.

See the live game from any angle, with the Vodafone Stadium Live app.

We’re pleased to announce the launch of Vodafone’s new game-day app Stadium Live – the app that lets you live stream the action straight to your smartphone while you’re at Mt Smart. Or, as it’s known on Friday night, Manu Vatuvei Stadium!

Whether you’re sitting in the stands, lining up for a hot dog or waiting for a friend, you won’t miss a moment.

It also lets you see all the big moments, like tries, tackles and the big hits over and over again, with rewind and replay. Plus, see player stats, in real-time.

Stadium Live is available now for iPhone or Android. You can find it by clicking on the links below

Or search Vodafone Stadium Live in the app store.

Miket12 said:
Was feeling confident until I saw who the senior video review official is.... now, not so!!!!
Click to expand...

We're not playing the dogs, so he should be ok.
Reactions: bruce

Contributor
If they lose to Penny at Manu Vatuvei stadium without Moylan. Well then hell, what more can you say.
Reactions: bruce, Raw Power, eudebrito and 1 other person

Stalefish540 said:
If they lose to Penny at Manu Vatuvei stadium without Moylan. Well then hell, what more can you say.
Click to expand...

Still hasn't been confirmed that Moylan is out - looks as if they're waiting until the final teams are announced an hour before the game tonight. 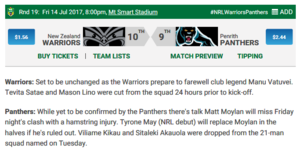 Contributor
I'm going to expose myself as a noob around these parts but what the hell is JANFIN?
Reactions: gREVUS, Defence, danyooll and 3 others

Don't be embarrassed, drunk_monk, even those of us who've known him as long as he's been a member are asking that question!

Fair enough on Salford insisting Manu couldn't play today if he's flying out Sunday, so I don't personally see any "only at the Warriors", "embarrassing for the club to treat Manu this way" etc stuff going on.