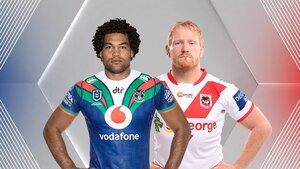 One good thing about the C19 lockdown is that is has made me a bit more appreciative.

It'll be a nice change just to have a few mates over for a BBQ & a few brews while we watch the footy regardless of the outcome.

It'd definitely be more enjoyable if we win though & the Dragons are a team we seem to have the wood over in recent times. So we should have a decent shot at our first W of the year.

I'm excited yet I'm once again holding back any thought of victory.
Regardless of the sacrifice the guys have made, I just don't care as much while Kearney is there.
He has shown repeatedly that he can't change, he never learns from his mistakes and is blind in his selection fuck ups like no coach I have ever seen in my life.
He will use the injury crisis to full affect so that he can use this as an excuse to why he continues to make the same blunders with or without the injuries.
"We are down on props"
"Yeah but Steve, even when you had them at your disposal you didn't play them, you usually play 3 hookers"
"Um yeah you know but um, you know, um, we have lots of props injured'
The guy is a complete fraud as a coach. No doubt a nice guy but fuck me, how the guy continues to make the same mistakes when everyone who has watched more than 3 games of league can see the issue is beyond me.

Anyway, now my Kearney rant is over.
I hope this team hasnt slacked off over the lock down period and been stuffing their faces with KFC instead of being on the treadmill.
We aren't far off seeing how they went.
I won't hold my breath going off previous experience.
Would love a flashy Warriors of old appearance but just can't see it.
Reactions: Worried2Death, Hazman, Akkerz and 3 others

I’m more excited than at the start of the season pre Covid. There are more unknowns - how fit they are after Covid, the new players coming in, how Katoa will progress, how the rule changes affect our team, etc.

I feel the draw is better for us, less travel, hopefully less impact from the ref.

I'm expecting the refs to give the dragons 5 repeat set calls in the first 20 minutes and take us out of the game completely.
Reactions: Afakasi247, Run_it_str8, YeahNah 4020 and 5 others

I hope I'm totally wrong but after listening to Tohu Harris on radio yesterday morning and being asked how they were going leading up to this game he mentioned their mindset of missing their families. I can imagine that but I hope it's more focused on the opportunity to win the game or at least be competitive. Hey maybe I'm suffering from too many hangovers from past games. Bring it on
Reactions: Worried2Death and Raw Power

If it taught me anything, its that nothing changes with the same coach and players

Its been high scoring the last 3 games. And we are a team that dont know how to score...
Reactions: Worried2Death, Sledge, Rizzah and 5 others

If it taught me anything, its that nothing changes with the same coach and players
Click to expand...

Not holding any thoughts of a W but for FFS please have red hot crack SMH
Reactions: Worried2Death, Rizzah, Run_it_str8 and 4 others

Contributor
I will listen in on the wireless.

Although I am not certain that the ABC have the game. With Covid killing radio sport, coverage this year will not always be possible?

Well, Sup42, on the bright side, if there is radio coverage, it will sound pretty much 100% like a normal game what with all the piped crowd sounds being used. Unless they do an Axl Rose and just use the same pre-recorded "crowd performance" for every game. So some bat-eared (I know, unfortunate term given Wahun, but eagles hearing apparantly isn't that chrash-hot while bats hearing is) person may notice that a certain spike in sound always happens 43 minutes 13 seconds into the game.

The Truth, I also would love a flashy performance. But given the choice between our first W and our first flashy performance, the "Razzle dazzle, monkeys in the trees" stuff can be put on hold, thanks.
I just don't want to see our huge Warriors forward pack losing again.

I don't know what to think guys.. After looking at the state of us in the first 2 rounds, I know it's hard to optimistic. I still think with the right gameplan, our side can take the Dragons. I just have so little faith in Kearney I'm not sure it will happen today. Apparently we've changed tactics a lot since the first couple rounds, but Kearney has like 6 years of first grade coaching experience to develop these game plans, It's just so clear he doesn't cut it.

I'm predicting a close loss, but am so hoping we can turn it on!!
Reactions: Worried2Death, Akkerz, Hazman and 2 others

If it taught me anything, its that nothing changes with the same coach and players

Its been high scoring the last 3 games. And we are a team that dont know how to score...
Click to expand...

You're right about the "and players" part. But if the good players don't want to sign, you can't really force them to. It also teaches you that nothing changes with a new coach in a shit environment. And why the idea of sacking a coach in a shit environment mid-season and going with a caretaker coach (which ends up swapping out Coach Shit A for Coach Shit A's Assistant nine times out of ten) has almost 0% chance of turning the ship around anything like 180 degrees. it's more like 22-45% degrees. A bit less shit, but still pretty shit. It might work where it's largely demonstrable that Coach Shit A was the problem (which it isn't here, it's not like Kearney's taken a nicely humming machine and screwed it up completely, he's taken on a spluttering machine and doesn't appear to know how to get that hum going/or can't given contracts, lack of alternatives etc), but as a matter of principle, even if it was, I'd sack the assistants too. Get an outsider in.
Reactions: Worried2Death, Akkerz, john nick and 1 other person

Come on boys, you can do it.

Maybe not intentionally, but you can do it.
Reactions: Worried2Death, Waiting For Premiership, Sup42 and 2 others


Six tries to none!!
Reactions: WA supporter, Worried2Death, Sledge and 5 others

The Dragons will have an assistant Coach in Shane Flanagan who will have our number... For me it doesn't look good for our crew... Michael Jordan had Pippen and Rodman... Roger Tuivasa-Sheck can't do it alone!
Reactions: Worried2Death

I’m loving the widespread optimism, unfortunately I don’t feel it. First 2 rounds we looked so shit, no reason that has changed. Same coach, same bang average roster. Dragons forward pack is going to rip us apart. But again, I will watch it all and still come back next week haha
Reactions: Worried2Death, roadrunner and Sup42

Sammyw11 said:
I’m loving the widespread optimism, unfortunately I don’t feel it. First 2 rounds we looked so shit, no reason that has changed. Same coach, same bang average roster. Dragons forward pack is going to rip us apart. But again, I will watch it all and still come back next week haha
Click to expand...

Me to Sammy.Only thing we got in our favour is we cant get any worse _I hope LOL
Reactions: Worried2Death
Show hidden low quality content