After an initial taste of first-grade football last year, the 20-year-old Lolohea has been ever-present this season appearing in all 11 matches so far as have Kata (20) and Lisone (21).

Vodafone Junior Warriors captain Sipley (20) played his first New South Wales Cup match against the Newcastle Knights on Sunday following a string of impressive performances in the NYC and for the Junior Kiwis.

Lolohea, Kata and Lisone have all been secured to the end of the 2018 NRL season while Sipley, now in his third and final NYC campaign, has been signed to 2017.

“All four players are outstanding examples of how our pathways are working,” said Vodafone Warriors head coach Andrew McFadden.

“They’ve all been developed through the NYC and have also had experience in our New South Wales Cup side.

“I can’t say enough about the way Tui, Sol and Sam have progressed in the NRL this year. They’ve absolutely grabbed their opportunity to not only claim spots but to establish themselves as first-choice NRL players. Tof has shown he’s right on the same track as well.

“We have great confidence in all four of them playing a significant role in our future.”

Lolohea, Kata, Lisone and Sipley were all in the club’s NYC premiership-winning side last year.

Lisone has impressed throughout the campaign with consistent performances from the bench when he has been injected for the experienced Ben Matulino and Jacob Lillyman.

Sipley was named players’ player of the day in consecutive matches by his NYC team-mates before earning promotion to the NSW Cup side last weekend.

Club Number: Yet to make debut 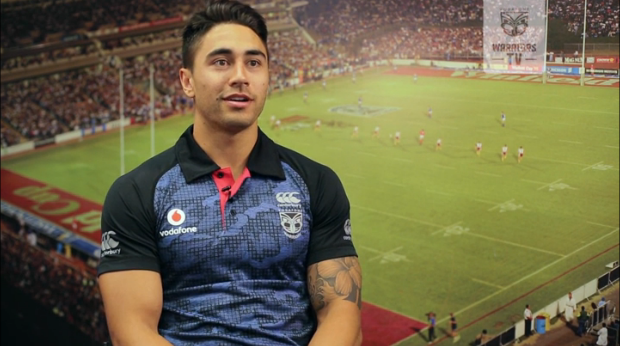 Johnson’s ecstatic about both his new contract and the captaincy appointment.

“It’s been a huge last few days sorting out my future as well as finding out I’ll be captaining the club at the very first Auckland Nines tournament,” he said.

“I can’t say enough about the job Peter (Brown) and the Vodafone Warriors have done in putting together my new contract. I absolutely love being at this club, living in Auckland and being close to family and friends.

“When I signed my last contract I said I wanted to repay everyone who has supported me and the same applies even more now.

“This club, the coaching staff and my team-mates have played a huge role in developing me while my family, friends and our members have given me fantastic support. I always want to give back to them.

“There was other interest but I love playing rugby league. There’s so much to look forward to here as we look to grow and improve and I want to be a part of that as we strive to win the club’s first NRL premiership.

“I’m also massively excited about playing in the Nines and having the experience of leading the team in front of a full house at Eden Park plus our NRL games to follow there early in the season.”

“The fact we’ve extended the contract of one of the most sought-after players around in Shaun is enormously important for our club,” he said.

“It speaks volumes for what we’re seeking to build here, not just in the quality of players we’re able to attract and retain but also in the way they’re helping to create the culture we’re striving to develop and sustain.

“Obviously Shaun is an exceptional football and athlete. He’s also represents the club well and is critical to where we’re going this season and beyond.”

Johnson announced himself to the rugby league world with two outstanding seasons in 2009 and 2010 when he scored more than 400 points in 45 games, including seven goals from seven attempts in the Vodafone Junior Warriors’ NYC grand final win in 2010.

He played 16 games in an eye-catching NRL rookie campaign in 2011 – highlighted by his appearance in the grand final – before following up with 22 appearances in 2012 and all 24 in 2013; since establishing himself in the first-grade side he has played in all but two of the Vodafone Warriors’ last 61 games.
Johnson also played in each of the Kiwis’ seven Tests in 2013 including the Rugby League World Cup final.

The Whangaparaoa-raised Johnson will be a spectator at North Harbour Stadium today as he watches his team-mates begin an intensive 15-day preseason campaign which also takes in the first-ever ‘Clash of the Warriors’ against Wigan at Waikato Stadium on Wednesday (7.30pm kick-off), the NRL Nines next weekend and the final trial against Brisbane at Dunedin’s Forsyth Barr Stadium on Sunday, February 23 (3.00pm kick-off). 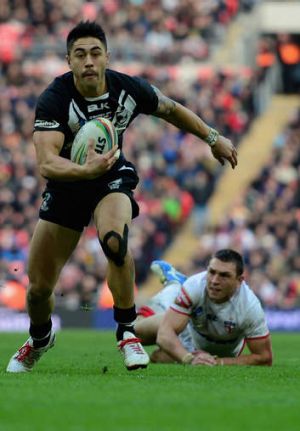 The New Zealand Warriors have pulled off a major coup by re-signing star halfback Shaun Johnson until the end of the 2017 season.

Johnson, the Kiwi's No.7 - whose current deal expires at the end of this season - would have been one of the most sought after talents in the NRL heading into 2015. Instead, the Auckland club can base its long-term plans around one of the game's best attacking players.

''For something this big about my future, I wanted it to be handled before the season started,'' Johnson said. ''So that when it comes to the time to play, I can focus solely on that and don't need to worry about anything else. I'm very happy that it's been sorted.''

Early signing: Shaun Johnson is sticking with the Warriors until 2017. Photo: Getty Images

At 23, Johnson is approaching his peak years and this deal will keep him at the club until he's 26.

The Bulldogs and Penrith were both linked to Johnson last season. It was reported that the Panthers were prepared to offer him a $2.2 million three-year deal.

While the Warriors haven't announced how much they have paid to keep Johnson, no doubt they have given him a significant pay rise.

''I'm certainly proud of where I am at the moment,'' he said. ''I'm able to stay at the club I've grown up admiring and always wanted to be a part of, and that makes it more special. This is massive for myself and my family and I'm very happy.''

Johnson, who has also been named as captain of the Warriors' team for this weekend's Auckland Nines, said a key factor in him choosing to remain at the Warriors was seeing how ambitious the club was to succeed. That ambition was reflected in the club paying a record transfer fee to sign Sam Tomkins from Wigan this season.

''A big part of where I'm at at the moment is wanting to win a competition and that was massive in determining where I was going to go,'' Johnson said. ''Seeing the players that the club have signed and also who they've retained, played a role in why I'm staying at the club.

''I'm really looking forward to seeing how we go - we've got a chance to do something special and I'm really excited by that.''

Warriors coach Matt Elliott is delighted that he has been able to keep hold of Johnson.

''The fact we've extended the contract of one of the most sought-after players around in Shaun is enormously important for our club,'' Elliott said. ''It speaks volumes for what we're seeking to build here, not just in the quality of players we're able to attract and retain but also in the way they're helping to create the culture we're striving to develop and sustain.

''Obviously Shaun is an exceptional footballer and athlete. He also represents the club well and is critical to where we're going this season and beyond.''

Johnson's snubbing of other offers to commit his future to the Warriors will prevent any chance of a repeat of the issues that hounded his Warriors teammate Feleti Mateo last year.

Mateo negotiated his deal with the Warriors in the middle of the season and admitted it affected his game. But there won't be any such problems with Johnson and he revealed that he wanted to get everything signed off before the new campaign begins.