With the up coming Auckland Nines tournament, I want to know what position people think will be the most vital to success.

I think that big mobile backrowers who can attack and defend will be the most sought after with little whippets like Johnson and Sam running off them in attack.
Reactions: 2 users

First reciever is by far and way the most important player in this type of format. I would say most teams will run with a more traditional halfback

Centers can tackle , pass a ball and are fast.


I'd play that team against any made up of players from other positions on a rugby league roster.
Reactions: 1 user

I think the main thing will to be good lateral and one on one defenders. There's going to be so much more room, so you have to be careful to not let the speedsters get on your outside.
Reactions: 1 users

Contributor
3 key positions;
1.Big mobile 2nd rower to bend the line and suck in defenders with a chance of a cheeky offload.
2.Fast winger with wheels to get on the outside or once put into space is gone.
3.Creative playmaker to run off the big men and have fancy footwork to run through broken play.
Trickiest part is the also all need to be strong defenders.

I wonder if there's room for Sam Lousi in this team? He'd certainly suck in defenders. The only question mark would be on his speed in defense.
Reactions: 1 user

Fullback for mine. Where he chimes in on attack, left or right, is where the ball should go. He will be the one player that can play halfback, centre, wing and of course his own position.

Add to that being the last line of defence, a try saving tackle or hold up over the line can be the difference between winning and losing.

IMO it will be the Fullbacks who are heralded as the true stars of the Nines...
Reactions: 1 user

Greg inglis will be hard to stop.
Reactions: 1 users

goldcoast-warriors-fan said:
Greg inglis will be hard to stop.
Click to expand...

I think the player of the tournament is going to be Anthony Milford...

Lots of speed and skill in the warriors squad, Locke tomkins fish Hurrell Johnson, think any of our juniors will get a run? Tui lolohea? Mariner, fusitua, hukatai, kata?

goldcoast-warriors-fan said:
Lots of speed and skill in the warriors squad, Locke tomkins fish Hurrell Johnson, think any of our juniors will get a run? Tui lolohea? Mariner, fusitua, hukatai, kata?

While that side would be tempting just because of their try scoring ability, who is going to defend? Looks incredibly fragile.


Any word on TL's injury? I think he's vital to our chances playing dummy half because I think you need one dominant playmaker, and then someone else who can provide a second playmaking option. While the fullback can fill that role it then removes the role of the fullback from the attacking line. A creative dummy half is a must IMO.

Then obviously is speed on the flanks and then rock solid defense in the middle.

IMO that's a fairly balanced squad, although I'm sure I've missed someone obvious (not Manu)[DOUBLEPOST=1386925657][/DOUBLEPOST]And yes I do think a couple of youngsters will get a run in the squad.

I don't think I'd play Manu in this tournament, while he would be great close to the line, I think any defensive problems with him (especially the time he takes to turn and chase), will be exasperated by both the attacking nature and more space each player has to attack (and defend). I'd be more confident with the likes of Fisiiahi, Locke, and Laumape on the wings. However, now that I think about it, the prospect of Manu having that much space one on one with a defender inside the opposition's 20... it would be pretty lethal. Perhaps this is finally the format to try Manu in the centre of the field?

The other regular Warrior I wouldn't play is Leuluai. I don't think we would get enough out of him, as he doesn't really have the line breaking ability/X-factor (for lack of a better phrase) I'd expect from a small man in this format; I think Godinet would be a better hooker/play maker.

That also raises another point - should teams play a traditional hooker, or would it be better to have the closest forward acting as dummy half. The latter would allow for an extra play maker in the side. Then the make up would be a winger, centre, play maker and forward on each side, with the fullback chiming in wherever?

My team, although will probably change it a few times in the next month; still deciding the best tactics:

I don't think there's really any need for traditional props in this format - there will be enough space that any forward will make good yardage (especially with less people in the tackle). Props would most likely be the weak links in defense in this format, and heaven knows we've already got enough defensive problems in the backline.
Last edited: Dec 13, 2013

We should just send the U20's out there. Would still win.

Should bring up a fairly accurate assessment.

Brad Fittler wants to make a cameo nines comeback.
At 42 years old, he feels like he can make the Roosters side.

Wonder if Ruben Wiki has any thoughts of a cameo.
He is in such great shape with great fitness.
Be a sight to see.
Reactions: 2 users

Weno said:
Brad Fittler wants to make a cameo nines comeback.
At 42 years old, he feels like he can make the Roosters side.

Wonder if Ruben Wiki has any thoughts of a cameo.
He is in such great shape with great fitness.
Be a sight to see.
Click to expand...

And lets bring back Menzies for the Eagles! He would actually be realistic as he just finished playing

Lockyer for the Broncoes too
Reactions: 1 user 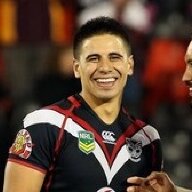 Yeah lets just bring everyone out from retirement so the clubs don't get their star players injured and call it the NRL Masters.[DOUBLEPOST=1388864732][/DOUBLEPOST]

I heard yesterday Maumalo, Abbey and Lolohea have been short listed from the 20's to run in the 9's for us.
Reactions: 3 users
Show hidden low quality content
Share:
Share