eudebrito said:
Only watched like 15 minutes of that game, he was out there making tackles and taking runs, not much more to say. Looked ok. Probably fit enough to replace Vuna on the bench this week.
Click to expand...

Yeah I was all set to watch the game at home when I ended up having to chat to a visitor and thereafter all I could see was Pulu having to make lots of tackles along with the rest of them on the back foot...while I felided questions like ' so the team in the game at four pm is the better team playing today ? '
Reactions: Off The Bench

The Wyong Roos have stormed into the top-eight of the competition ladder with a resounding 30-6 victory over the Warriors at Mt Smart Stadium on Sunday afternoon.

Two tries to Josh Curran inspired the victory with both of his four-pointers courtesy of some classy touches from five-eighth Sean O'Sullivan, while Sitili Tupouniua and Frank-Paul Nuuausala lead from the front with some defiant efforts on either side of the ball.

Their valiant defence in the second-half galvanised the Roos to an impressive victory away from home - recording their sixth win from eight matches to well and truly keep their finals hopes alive.

Both sides struggled to capitalise early in the contest with ill-discipline ruining their respective chances, but a Reece Robinson intercept from his own try-line threatened to break the deadlock only for the desperate Warriors defence chasing him down.

Although their chances were few and far between throughout the opening 20 minutes, the Roos eventually drew first blood when Curran stormed onto a perfectly timed pass from O'Sullivan to barge his way over from close-range.

Another try beckoned when Tupouniua steamrolled his way through some flimsy Warriors defence on the ensuing set, only for his offload to hit the deck in a lucky escape for the home side.

The Roos extended their lead in the 35th minute after a Mitch Cornish kick ricocheted off two Warriors defenders before Paul Momirovski pounced on the loose ball for their second unanswered try.

Cornish converted from out wide as the Roos took a healthy 12-0 advantage into half-time.

O'Sullivan and Curran combined again after the back-rower latched onto a pin-point grubber for his second try of the game just five minutes after the break.

A powerful surge from King Vuniyayawa ignited the Warriors in the 55th minute with his try giving his side a glimmer of hope, but a barnstorming carry from Frank-Paul Nuuausala just moments later gave the Roos a quick reprieve.

Wyong's resilience was tested countless times in the latter stages of the second-half as the Warriors continued to threaten their goal-line defence, but a remarkable try-saving tackle from Tupouniua typified the committed efforts of his side.

A late penalty-goal from O'Sullivan eliminated any chance of a potential comeback from the Warriors, before Tupouniua earned a well-deserved try after he burst onto another timely pass from the dynamic No.6 to ice a crucial victory for Rip Taylor's men.

The Vodafone Warriors will be seeking to snap a run of three straight losses when they take on the Canterbury-Bankstown Bulldogs in Sunday’s 20th-round Intrust Super Premiership match at Belmore Sports Ground in Sydney (1.00pm kick-off local time; 3.00pm NZT).

When they beat the Mounties 24-20 on June 30, they were pushing for a top four spot but losses since then to Wentworthville, Penrith and Wyong have seen them slip to eighth spot, level with Wyong on 20 points but with a superior points for and against record.

The Bulldogs are only two points ahead alongside Wests Tigers on 22 points so Sunday’s encounter in Sydney could be pivotal in terms for the race for the finals.

Experienced halfback Mason Lino has been named to start in the halves with Chanel Harris-Tavita while the side also welcomes back big prop Chris Satae, who has been on the bench for the club’s NRL team in its last seven outings. He’ll have the chance to get in some bigger minutes.

That's a good fricking team. Why aren't they top of the table.

The only players I don't rate in the whole 17 are Cook and Bell. Neither of them are ISP standard.

wrighty said:
The only players I don't rate in the whole 17 are Cook and Bell. Neither of them are ISP standard.
Click to expand...

Both ISP standard. Neither are NRL standard IMO but will serve well enough at an absolute pinch. Cook especially is an awesome player but only in the halves...
Reactions: Iafetas Kickstand Wang, Hazman, AlexM and 1 other person

Excuse me if i've missed it somewhere but is Preston Wiki Ruben Wiki's son? 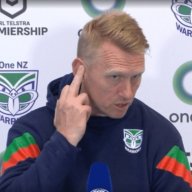 wrighty said:
That's a good fricking team. Why aren't they top of the table.

The only players I don't rate in the whole 17 are Cook and Bell. Neither of them are ISP standard.
Click to expand...

James Bell is an absolute machine at ISP level. Wish more players has his work ethic and attitude.
Reactions: Defence and Dave Brough

Tedster said:
Excuse me if i've missed it somewhere but is Preston Wiki Ruben Wiki's son?
Click to expand...

Thanks for that.
Reactions: mt.wellington

Sounds like he's calling the horses, not the NRL.
Reactions: Defence, mt.wellington and AlexM

Sam cook just went over. ISP is so hard to watch.

Will get dropped to park footy next week then
Reactions: Off The Bench 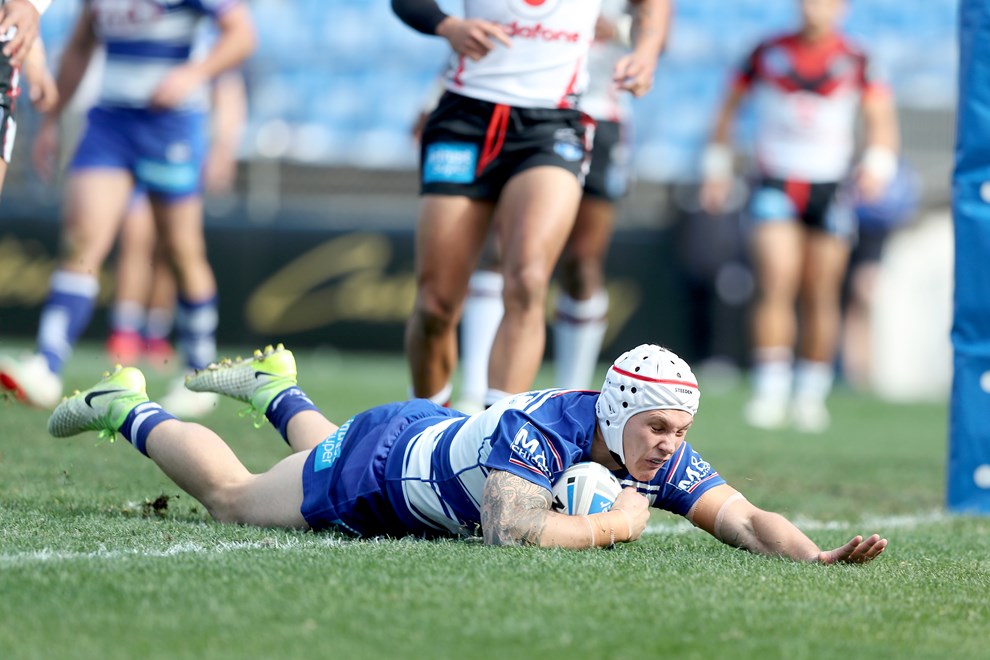 The Canterbury-Bankstown Bulldogs have overcome a late scare to defeat the Warriors 30-18 in their Round 20 clash at Belmore Sports Ground.

With second-rowers Lachlan Burr and Chris Smith having their moments and Zac Woolford again strong for the Bulldogs, the win sees Steve Georgallis' men remain in 5th place on the Intrust Super Premiership ladder for now, while the Warriors remain on 20 competition points.

A grubber was sent dead by Mason Lino in the ensuing set, providing the Bulldogs with seven tackles - an opportunity they made the most of. Zac Woolford, darting and grubbering from dummy-half on the last, would then be the beneficiary of a Hayze Perham fumble to score his side's first four-pointer.

Cleeland's conversion attempt sailed wide, but the home side soon began to build pressure and earn a penalty in front of the posts. A ruck infringement involving Chris Satae gave Cleeland the chance to add the extra two points for the 6-0 lead.

The visitors would soon hit back, however, in what can only be described as a soft try for James Bell. The Warriors captain took a short pass from dummy-half Sam Cook, getting past Cleeland and Lachlan Burr to cross untouched. With the conversion, scores were locked up 23 minutes into the game.

Next, a simple right-side movement brought the Bulldogs a second, with Cleeland and Josh Bergamin combining to send Tom Carr over in the north-eastern corner. The conversion attempt from out wide was waved away.

Penalties and errors were a feature of the remainder of the first half, while second-rowers Burr and Chris Smith both coming up with strong runs which could have resulted in points. Carr, too, had a good chance to get a second in the Bulldogs' last-ditch effort on the stroke of half-time, but they would go into the sheds leading 10 points to six.


The Bulldogs resumed play in the second half with the same energy as the first, with Carr once again a likely tryscorer. The home side was disappointed not to have scored via the winger, however, when a cross-field kick was ruled to have been taken simultaneously by Carr and opposite number Junior Pauga, despite Carr grounding the football.

Soon after, the Bulldogs would be awarded back-to-back penalties on the Warriors' line, opting to take the shot at goal, which was missed by Cleeland. The follow-up set again could have brought points for the Bulldogs, but a short ball from Bronson Garlick to John Olive went forward.

It seemed inevitable that the Warriors would eventually make the Bulldogs pay, which they did via rampaging forward Pat Sipley, who singled out Bergamin and Jesse Martin to crash over in a one-out play. Chanel Harris-Tavita made no mistake with the boot to give his side the lead for the first time.

As the game reached the three-quarter mark, a costly mistake from Bell would gift the Bulldogs a try. A knock-on from the captain was cleanly scooped up by Cleeland, who raced 20 metres to score untouched, successfully converting for a 16-12 score line.

Their third try might have been a simple one, but the Bulldogs' fourth, in the ensuing set, was enough to get the Belmore crowd to their feet. A Renouf To'Omaga offload sparked the entertaining try, with Morgan Harper then finding a flying Tom Carr, who outpaced Pauga for a second. With Cleeland converting from the sideline, the home side opened up a 10-point lead.

After Tom Ale stripped the ball from Josh Cleeland 20 metres out from his own line, the visitors enjoyed repeat sets in good field position, eventually cracking the defence with a dummy-half run from Cook. The Warriors No.9 eventually muscled his way past Bergamin, before Harris-Tavita converted.

Time was not on the Warriors' side, and they needed a strong set after points to continue to apply pressure - but a miscommunication from the restart allowed the ball to bounce dead. Given a golden opportunity, second-rower Chris Smith put forward a strong run to bump off Matiu Love-Henry and Perham en route to the try line.

With Cleeland converting and the Warriors' next kick-off going out on the full, the Bulldogs were to hold on for the victory. A late penalty awarded to the home side allowed them to extend their lead further, with Cleeland kicking the penalty goal for the 30-18 victory.

The Vodafone Warriors are determined to put a lean spell behind them when they tackle the bottom-placed Newcastle Knights in Saturday’s 22nd-round Intrust Super Premiership match at Mount Smart Stadium (3.00pm kick-off).

They took a run of four straight losses into their bye last weekend and now sit seventh on the table on 22 points, level with Wyong but ahead on points for and against.

The Vodafone Warriors are precariously poised, though, just a point clear of the ninth-placed Blacktown Workers Sea Eagles and two ahead of the North Sydney Bears in 10th place.

On the other hand, they’re still just four points behind the Mounites (second) and St George Illawarra (third) and only two back from three teams on 24 in Newtown, Canterbury-Bankstown and Wests Tigers.

The Vodafone Warriors are showing few changes from their last start against the Bulldogs as they set about securing their 10th win of the season.