Great to see this initiative from the club and hope this brings a more professional era to our club.

Young league guns learn rules in the house of the rising sons
5:00 AM Sunday Apr 3, 2016
Curfews and doing dishes are the first steps towards keeping future Warriors on the rails, writes Russell Blackstock.
It is six o'clock on a balmy weekday evening and five rising young footy stars are busy behind the doors of a suburban East Auckland garage.

At a time when most youngsters would be zoning out in front of a TV or catching up with mates on Facebook, these dedicated lads are working up a sweat.

Two are are pedalling furiously on spin bikes, one is cranking up a crossfit machine and a couple more are having a breather and a game of table tennis.

Amid the whirr and clatter of the working home gym there is a lot of laughter. It is the sound of kids enjoying themselves.

An hour later the same youngsters are busy in the kitchen preparing dinner - mashing potatoes, cooking chicken and tossing salad.

It isn't long before the group sits together around the dining table respectfully saying grace before tucking into a small mountain of fresh, home-cooked grub.

"This is my favourite part of the day," 17-year-old lock Nathan Newton says with a grin. "This is when we get to relax and really wind each other up."

Welcome to the Warriors house, a home away from home for some of the NRL club's most promising young players.

With house parents Spencer and Carmen Taplin in charge, the six-bedroom rented Howick property gives young athletes the chance to put structure around their daily routines.

There they learn life skills and are expected to meet high standards in terms of nutrition, rest, recovery and preparation as aspiring footballers.


Five of the Vodafone Warriors Under-20 squad are among the first intake to the house, with NRL squad member Sam Lisone.

Some have part-time jobs such as forklift operators and trainee barbers, others are studying at university or college.

"This has been fantastic for getting me into a good routine," says Lisone, who as a first team prop has the luxury of his own room. 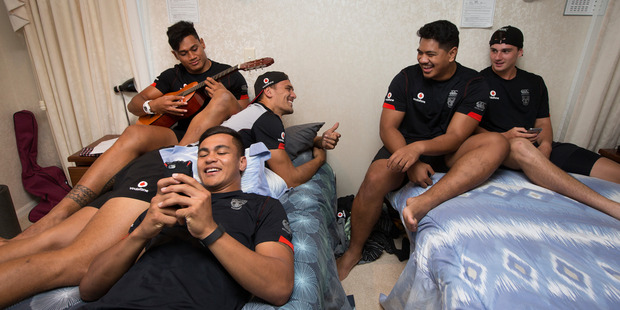 Welcome to the Warriors house, a home away from home for some of the NRL club's most promising young players. Photo / Brett Phibbs
"Staying here has helped me a lot in terms of making the right life decisions and eating and sleeping properly.

"I haven't been here long but I am already leaner and fitter and my game has improved a bit, too."

The road to league stardom can be strewn with pitfalls and temptation. Russell Packer, Kevin Locke and Sione Faumuina are just a few well-known former Warriors who hit the headlines for all the wrong reasons after becoming embroiled in off-field misadventures.

In Australia last month, Ben Hunt, Anthony Milford and Dylan Napa were among six young Queensland stars in State of Origin purgatory after being handed 12-month bans from the interstate arena.

The players copped the sanctions for breaking curfew in the Emerging Origin camp, which attracted controversy after reports of late-night drinking sessions and a confrontation with the police.

The Warriors don't want to see the same thing happening in Auckland.

The club's new concept of young players living under the same roof and under the wing of a mentor is one that has already worked well at the Sydney Roosters.

Warriors chief executive Jim Doyle imported the idea to New Zealand after he introduced a similar scheme at the Aussie club last season.

Doyle says he has seen too many youngsters wreck promising careers by going off the rails.

"It is not just that kids can make bad life decisions when they are away from home, but sometimes the environments they are already living in don't offer them the best chance of becoming a professional player," he says.

"A lot of our youngsters stay in homes where they might be sharing bedrooms with relatives, eating all the wrong stuff and not getting enough sleep.

"In the past, our young players from outside Auckland would get billeted with friends or other family members when they join the Warriors but living with other players in a structured setting is more beneficial."

The Howick house is sponsored by manufacturing company Autex. As well as having six bedrooms, it has three bathrooms, two spas and two spacious lounges.

There the young players learn how to to cook, clean and tidy up as well as wash and iron their own clothes. 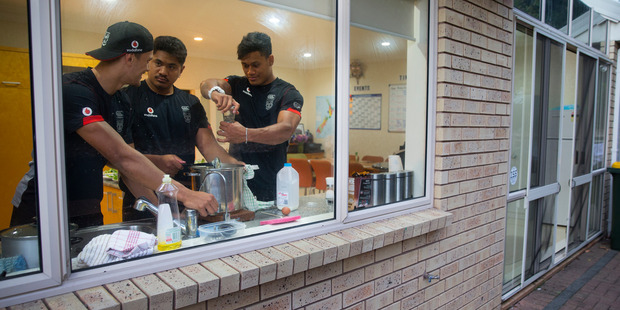 Preston Riki, Tamati Ioane-Niko and James Mafi on kitchen duty. Photo / Brett Phibbs
On a wall next to the dining table individual daily activities, chores and even their weight is recorded on charts.

Menus are laid out for the week and a house rulebook has to be followed.

For a start, mobile phones are not allowed at the dinner table and are deposited in a box before each meal.

There is a 10.30pm curfew and the internet is turned off then, too. Junk food and chocolate is also a strict no-no.

Anyone caught breaking the rules can face punishments ranging from doing the dishes for a week, having phones confiscated or being banned from using the WiFi.

"I snitched on my room mate one morning for not making his bed and he got 50 push-ups for that," 20-year-old second rower James Mafi says. "It's amazing how quickly you start not to tolerate other people who don't follow the rules. We keep each other on our toes. It is a very disciplined way of life which is doing us all good."

The Taplins are not new to running a house of this type. The married couple ran the Roosters' set-up before returning home to New Zealand.

Spencer is entrusted with the day-to-day running and Carmen has a full-time role with the Warriors as the club's football operations co-ordinator. The couple have three kids and also live at the property with the players. It is a 24/7 job but they love it.

"At first, some youngsters don't like the idea of following someone else's rules and think I am a bit of a dick," Spencer says. "But they soon start to like being here and having a proper routine.

"There is no booze or girls allowed but it is not some kind of grim boot camp.

"We all sat down together at the start and discussed what a home means to them before drawing up the rules. 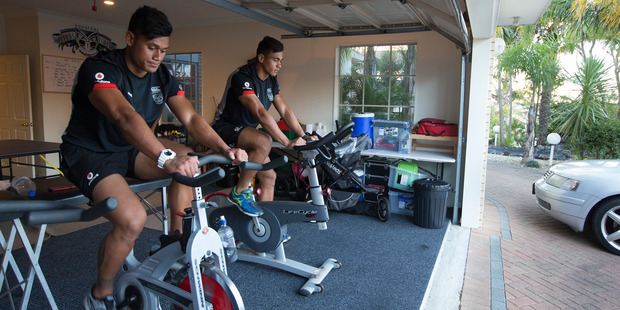 James Mafi and Junior Pauga train on the spin bikes. Photo / Brett Phibbs
"We want the boys to enjoy themselves and it is very rewarding to be able to help them make the right decisions and choices.

"Hopefully what they learn here will stand them in good stead for the rest of their lives."

Carmen acts as "mother hen" and offers a sympathetic ear to any problems.

"We approached Jim Doyle about running a house for young players when we lived in Australia," Spencer explains.

"I was sick of reading stories about youngsters being burned out by the NRL and some of them had even killed themselves because of the pressures.

"It is easy for them to go off the rails because there is no real system in place to stop that from happening.

"Physically these guys are in good shape but mentally they are still kids who can benefit from some help and guidance. It worked well at the Roosters and it is working well here."

Spencer insists they don't treat the boys any differently from their own children. "We try to show them if they take shortcuts in life, they will do the same on the field and likely won't succeed at the highest level."

Doyle is also pleased with the initial results and hopes to expand the project.

"The feedback I am getting is the players' weight, strength and speed is improving after moving into the house," he says. "It is also proving a good recruitment tool because parents know their kid will be looked after properly. And if they don't become a Warrior then that's okay, too, because I'm sure they will have turned out better people for just being part of our set-up."

Back to basics keeps boys on right track 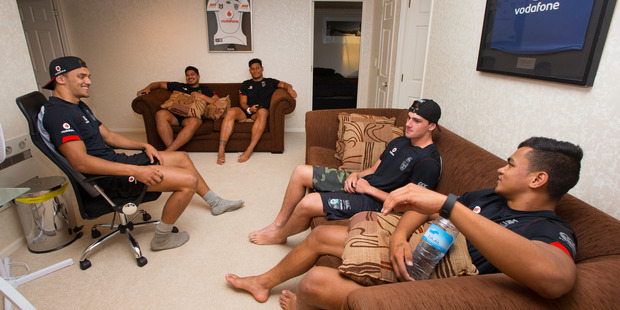 Pauga has a part-time community job with the Warriors and is also studying to be a personal trainer. "Spencer and Carmen give me a lot of advice and this environment has given me a lot of confidence. My dad died in 2012 and I was in a dark place for a while after that. The rest of my family is living in Melbourne and this is make or break time for me."

Mafi works as a forklift truck driver. "There were seven of us living in my house and my older sister carried the weight when it came to housework and cooking. It was great but whatever was put on the table I would just eat and this is better for me as an athlete. It is big-time discipline compared to what I'm used to."

Ioane-Niko is doing a course to become a barber. "I have dropped 10kgs after being in the house for just a month. I have been injured and had piled on a lot of weight. Living at home and eating what I liked wasn't helping me get back into shape. I asked to move into the Warriors' house to get me back on track. I was starving at first but now I feel great."

Newton is a student at Howick College. "Last year I intended going to Australia to play but when the Warriors got this house, that sealed it for me and I decided to stay. When I lived at home, my mum did everything for me so this has been a culture shock. It is good learning how to do things for myself though and I am now seeing the benefit of it."

Riki is working for a freight company and studying at university. "I was shocked at how well-organised the house is but it is doing me a lot of good. I am eating and sleeping a lot better and feel much better in the mornings. Like the other guys, I used to stay up until after midnight and was not getting enough rest. I feel being here with Carmen and Spencer has helped my game."

Warriors News Rugby league: NRL bunker slammed after try disallowed for the Warriors against the Knights