Brierley scores Scotland's first ever try against Australia
League One side Toronto Wolfpack have signed Scotland utility back Ryan Brierley from Super League club Huddersfield for an undisclosed fee.

Brierley, 25, is in line to make his debut for the Wolfpack in Sunday's Challenge Cup fifth-round tie with Salford Red Devils.

The move reunites the Scotland international with Wolfpack boss Paul Rowley, who coached him at Leigh.

ADVERTISEMENT
He scored 15 tries in 25 appearances after moving from Leigh in March 2016.

"It was clear that the move would be appealing to Ryan and, from our side of things, once the fee met our value of the player the deal was quickly signed," Giants managing director Richard Thewlis said.

"It's a sad day in some respects for us but the reality is that the move to Huddersfield and into Super League didn't really work out as either we nor Ryan would have wished."

Brierley will drop two divisions to link up with Toronto, who have won all five league games and are still in the Challenge Cup.

"Like all players, I wanted to be playing every week and that's the main reason for taking the new challenge at Toronto with a coach who obviously I know very well," he said.

"The initial aim of course is promotion and then the desire and ambition of the club is ultimately Super League and I hope to be able to play a big part in that and get back to level that I am leaving."

The Canadian crowd are certainly giving this a nudge - all their games televised and buying Super League players (that means paying a transfer fee!)

Not to mention this sort of thing;

The idea of a Canadian team seemed laughable at first, hats off to them for making it happen.

If they can sort their defence out (Major problem for all new sides and the Auckland lot).

Their ball distribution puts ours to shame.

They have some gnarly old forwards ala Newcastle that year Bennet got something out of the old dogs.

FuiFui Moimoi will prolly be a crowd favourite. Watching Fui joking around at training and being the clown reminded me a lot of our culture here.

Pom Coaches Recon that stuffs good for the team.

Maybe the Warriors should join the ESL...the way we train we would be unbeatable.
Reactions: 1 users

Yeah for those of who are interested in watching the Toronto Wolfpack will be live streaming their challenge cup game at 11pm tonight NZT on their website :

Go the Wolfpack!! I'll be watching it. Anyone know how many Canadians are actually in the 19 mans squad named for this game???

Johnnyray said:
Yeah for those of who are interested in watching the Toronto Wolfpack will be live streaming their challenge cup game at 11pm tonight NZT on their website :

link working for you?

Jamma said:
link working for you?
Click to expand...

If you are on Facebook you can watch match on their official Facebook page, I hope that helps.

WP really taking it to the Reds. They play a nice expansive game and regularly go side to side picking up easy metres as well as a quick play of the ball. Stretching Reds defence nicely. Their defence also shuts down a lot of the Reds options because of their line speed. WP keep this tempo up they will take this. Reds are looking tired and have already spent the last ten minutes of the 1st half trying to kick for touch on the last...
Reactions: 1 users

Fk that's an unbelievable 95 Warriors like half time score.

Wolfpack wont come back from this. They will be kicking themselves after a brilliant 1st half. Add to that the fact that Carney got red carded so Reds spent 50 minutes of the game with only 12 players. Horrible 2nd half was reminiscent of the Warriors fortunes in Canberra last week. Way too many errors and penalties. WP looked to be trying too hard.

Good first hit out in the ESL for them and they will be smarter for the experience. Need some genuine stars before they make the step up but they should do it on 2 years if they keep up the form they showed today...

Great hit out for WP with Salford ranked 3rd in ESL at the moment...
Reactions: 3 users

Great hit out for WP with Salford ranked 3rd in ESL at the moment...
Click to expand...

Apparently over 400,000 watched the game online, plus whoever watched in on free to air television in Canada.

I thought that this idea was just a gimmick but Toronto are starting to look like a very professional club, and they are definitely putting some money into the their bid to become a Super League team by 2019.
Reactions: 1 users

Lord Gnome of Howick MBE said:
Apparently over 400,000 watched the game online, plus whoever watched in on free to air television in Canada.
Click to expand...

The feed I watched on Facebook that the club promoted only had 2,000 max at any one time...
Reactions: 1 user

Should've blamed it on depression. That an mental illness. They've certainly got reason to. 5 straight defeats including the four nations.
People would've believed that and forgiven them. Depression and mental illness has become an epidemic and an acceptable excuse to get off anything.
Reactions: 1 user


Home opener draws a large crowd despite ugly weather, a positive sign for a sport hoping to expand internationally. 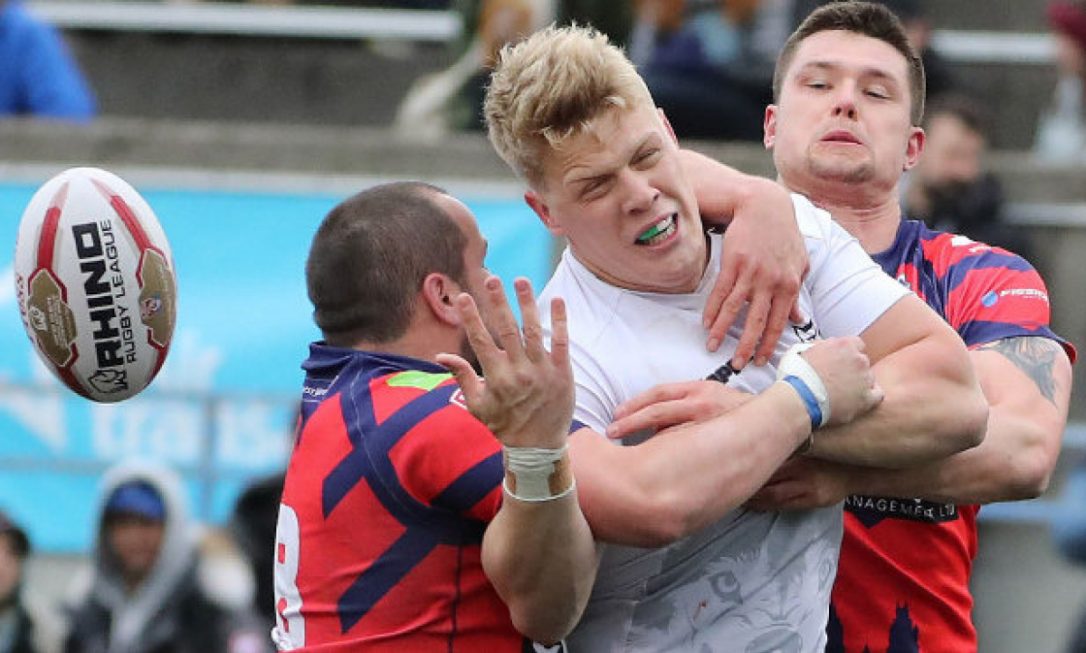 A team of full-time pros is supposed to put up a lopsided score against a squad full of hobbyists like the one Oxford fielded.

Winning over sports fans in a crowded Toronto market remains the stiffest challenge the Wolfpack will face competing in English Rugby League’s third division. In attracting 6,281 loud and passionate fans to Lamport Stadium on a chilly, drizzly day, the Wolfpack can confidently claim to have claimed an early lead in a never-ending competition for sports fans’ attention.

“I just knew (Torontonians) would take to something that was genuine, had passion behind it,” said Wolfpack CEO Eric Perez. “They like a Toronto team that can put wins on the board, and we seem to be that.”

Toronto’s first home game represented the first real test in Rugby League’s transatlantic experiment. In its 2014 strategic plan, the Super League identified international expansion as a goal and the Wolfpack mark the league’s boldest attempt to grow its overseas profile.

Toronto’s road games have drawn larger-than normal crowds at third-division clubs, with hometown fans eager to see recognizable names, even as they trounced the locals. Through six weeks of league competition, the Wolfpack has outscored opponents 372-49.

Toronto’s home opener quickly fell into that pattern, with the Wolfpack scoring a third-minute try and putting up 34 points before Oxford managed its first try.

By the 69th minute, frustration bubbled over. The teams may disagree on who started the fight but Toronto’s Jake Emmitt finished it, grabbing an Oxford player by the collar, taking several swings, then giving cheering fans a thumbs-up as he left the pitch with a red card.

“Quite a few of the fans enjoyed the punching up,” Wolfpack captain Craig Hall said. “But that’s not what we’re about.”

In two weeks Toronto hosts the Barrow Raiders, a fully professional squad that has also run off a series of one-sided wins. But Oxford fielded a team on Saturday that included two construction workers, a teacher, and a PhD student in entomology.

Many spectators recognized Toronto and Oxford were as evenly matched as the Blue Jays and the Intercounty Maple Leafs, and that Saturday’s game didn’t promise much competitive drama. But they also accept blowout wins as a necessary step toward promotion.

“They’ve demonstrated throughout the season that they have that calibre of play and I look forward to them moving up through the leagues,” said Port Hope resident Galen Flaherty, who attended the game with a group of friends. “There’s an appetite for rugby here. Just like Toronto FC succeeded, I think you can see a similar thing for the Wolfpack.”

TFC opened at home 10 years ago after a string of road games and drew a surprisingly large crowd on a cold, wet, gray day. That home opener drew three times as many spectators as the Wolfpack’s did, highlighting the pent-up local demand for the sport. While rugby league lacks soccer’s latent fan base, the Wolfpack’s win streak could help grow crowds at the 9,600-seat Lamport Stadium.

“We’re Canadians (and) and we support our teams,” said Amanda Andres, who travelled to the game from St. Catharines. “We’ll support our teams regardless of the score. We’re winning, so we can’t really complain.”
Reactions: 1 user
Show hidden low quality content
Share:
Share