General The Year the Kiwis Flew

The Year the Kiwis Flew

Go the mighty Kiwis - this was the year you flew!

In 2005 the Kiwi Rugby League team won the Gillette Tri Nations Series against Britain and Australia. What was even better was how they won - thrashing the Kangaroos by 24 glorious points to nil.
With a new coach drawing inspiration from his wifes gritty battle with cancer, and a team fired up and running on aroha, a new spirit filled the camp. Seasoned veterans like captain Ruben Wiki, Stacey Jones and Nigel Vagana mentored the younger players, fostering a whanau atmosphere where the team decided they wernt there to party - they were there to win.

That special dedication has been captured in this celebration of their amazing achievement. Hear in their own words how the boys took on the world's best and came away the winners. Celebrate an amazing team and their superb achievement. Savour the memory of their greatest tour with profiles on leading players, incidents and anecdotes from behind the scenes and exciting match summaries, illustrated with amazing photos on and off the field, and the Mad Butchers personal collection of tour memorabillia. As team manager he was there every step of the way and has been the driving force behind this 'must have' book for every league lover.

This incredible account written by Peter Leitch QSM and Richard Becht will be on sale in early May. 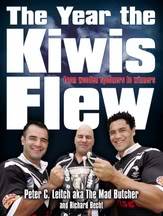 looking forward to getting this book!!


One of New Zealand's greatest sporting achievements in a compelling new
book has been released. Written by Peter Leitch (QSM) and Richard
Becht, "The Year the Kiwis Flew, From Wooden Spooners to Winners" is a
story of the Tri-Nation rugby league champions and their triumphant
series.

A book signing by the Kiwis Football Manager, Peter Leitch QSM (Aka The
Mad Butcher), along with players, Captain-Ruben Wiki, Clinton Toopi and
Louis Anderson will take place as follows:

My mum may be buying me it after all lol...since its $20 at the warehouse for a limited time, im being nice to her, she most likely will buy it
Show hidden low quality content
Share:
Share

General First Of The Year.

General Will Inu mAKe the Kiwis?