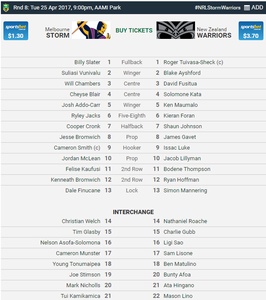 The Melbourne Storm and Warriors meet again in the annual Anzac Day clash at AAMI Park, and there is plenty on the line for both sides.

Following Kieran Foran’s debut for his new club in Round 5, the Warriors’ back-to-back wins were snapped in a hard-fought 20-8 loss to the Raiders in Canberra on Saturday. With a 3-4 record, the Warriors will be motivated to even the ledger with a statement win over Melbourne.

Meanwhile, the Storm rebounded from a bitter 11-2 defeat to the Cronulla Sharks, holding on for a slim 30-26 victory over the Manly Sea Eagles at Lottoland. While there’s been high scrutiny on Melbourne’s ball handling to start the season, their priority will be to reassert their league-leading defence against an unpredictable Warriors side.

With impending selection for the upcoming Australia-New Zealand Test, it’s also an opportunity for several key players to press their claims.

‌Why the Storm can win: The Storm are 6-1 and always find a way to win close games when things are going in their favour. Despite leading the NRL with the worst error rate after six rounds with 77 errors, Melbourne have set the benchmark for the competition with their trademark resilient defence. However, after exploding out of the gates to score four tries for an early 18-0 lead after 20 minutes, the Storm conceded 26 points. It is just the second time in the past two seasons they have leaked 26 points and only the third time they’ve suffered more than 20 points scored against them in that same time. Leading 30-16, Melbourne managed to hold on for the four-point win and now enjoy a ten-day turnaround after a tough schedule to start the season after challenging road trips to Sydney (twice) and New Zealand. With a lengthy period of time in preparation for ANZAC Day, coach Craig Bellamy will ensure his side is well-rested and ready for another balanced performance in attack and defence, similar to last year’s 42-0 demolition of the Warriors last year.

Why the Warriors can win: The characteristic ad lib style of the Warriors has often troubled Melbourne in the past. The two sides already met in Round 2 – before Foran’s club debut – in Auckland this season and despite the Storm grinding a 26-10 win, the Warriors proved to be a handful as they gained the early ascendency with a 10-6 lead after 20 minutes and trailed 12-10 at half-time before eventually succumbing. In his three games for the Warriors, Kieran Foran’s provision of structure gives the team greater balance in attack and will be crucial against the clinical Storm. The Warriors are an improved side with Foran who steered the club to wins over the Gold Coast Titans and Parramatta Eels before pushing the Canberra Raiders to the limit. The Warriors and Raiders were deadlocked in an eight-all stalemate with 20 minutes to go before the home side powered away for the 12-point victory. This week also sets up as a possible audition for the off-contracted star Foran who has been speculated as a possible signing for Melbourne next year. If Foran and halves partner Shaun Johnson can navigate the Warriors to a more consistent 80-minute performance than their Round 2 loss, an upset is on the cards.

‌History: Played 39; Storm 21; Warriors 16; Drawn 2. The Warriors are Melbourne’s trademark bogey side as history shows. However, the Warriors have beaten the Storm once in their past five matches, with Melbourne winning the past three contests. The Warriors have claimed three victories out of seven trips to AAMI Park – their last win in Melbourne came in Round 6, 2014 in a 16-10 scoreline.

What are the odds: Sportsbet reports triple the number of individual bets on the Storm and triple the money as well. Having said that, Melbourne 1-12 is the best backed option in the winning margin and there's been a bit of support for the Warriors at the line.

How we see it: It will be an absorbing contest between the two sides in another emotional Anzac Day affair. With the Storm and Warriors to the rise to the occasion, several stars will be key to victory, particularly in the halves. After three matches with the Warriors and last week’s loss, Foran will be motivated to demonstrate his superstar worth with a landmark performance. Issac Luke’s effort at dummy-half in opposition to Cameron Smith will also be key and it will be thrilling to watch Roger Tuivasa-Sheck go toe-to-toe with fellow fullback Billy Slater. Ultimately, the Storm’s forward pack presents very few flaws (if any) and will provide the difference between the two sides. It will go down to the wire before the Storm prevail by eight.

Been out all year.

Bit of a shock Melbourne having the most errors in the comp- doesn't sound right.

Defence said:
Been out all year.

Bit of a shock Melbourne having the most errors in the comp- doesn't sound right.
Click to expand...

Yeah, it doesn't seem to stop them, errors or injuries they keep winning.
Reactions: SilentOne

Been a long wait this week.

Really hoping for a victory to cancel out the noise from the media circus that is the Foran contact at the moment.

I hope the boys are hurting from the loss last week and realise you have to play with the same intensity for 80.
Reactions: snake77 and koolkat

My anus is ready.
Reactions: Lord Gnome of Howick MBE, Salatape, Straight up and 11 others

As the sun goes down we will remember them winning by 6
Reactions: bringmethehorizon, fizurg, Woofa and 12 others

Hope Sao steps up. With the limited minutes he has been playing we need greater output.
Reactions: Johnnyray, Sup42, hman and 2 others

Tell you what, whichever oxygen thief does the scheduling that ends up with NZ's only team playing at 9pm in the middle of the fucking week can kiss my ballbag. This goddamn comp has become more and more about the fucking Aussie TV dollars. Commemorate the ANZACS my arse, it's just a fucking marketing ploy.
Reactions: Draw and Pass, bringmethehorizon, The Cheap Seats and 18 others 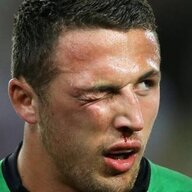 Good Luck Warriors! You got this!
Reactions: Off The Bench and Johnnyray

I feel, if we play like we did in the first half against the raiders.we gonna push them close. game of the round warriors by 4.lets go boys
Reactions: rugged

Warriors by 20.. Golden State Warriors
Reactions: scottyb, Straight up, Afakasi247 and 6 others

Good to have Mutts back, he'll be wanting to make a difference, Sao has to take on the enforcer role with his limited minutes. Gavet to have another blinder, loving this guy.

Im feeling the boys are due a big one, where they really show what they are capable off, Warriors 13+
Reactions: Straight up

Are you guys expecting Sao to be playing with Matulino back? I certainly aren't - the guy is absolute mud and offers nothing. He's only played 32 minutes in the last 2 games, so don't think Kearney thinks much of him either (still picks him though smh)

Would have been just as funny coming from you without the small print.


As good as the Storm are....the Warriors are a good chance in these fixtures.

Such is the disgraceful inconsistent slow torture of Warrior devotion.

Looking forward to following the game from work in the game day thread.
Last edited: Apr 25, 2017

My mouth is ready.
Reactions: Sledge, Rick O'Shay, Matulino's Left Shoulder and 5 others

For his anus?
Reactions: Draw and Pass, SilentOne, manunonu and 10 others

koolkat said:
I feel, if we play like we did in the first half against the raiders.we gonna push them close. game of the round warriors by 4.lets go boys
Click to expand...

I'm like RM, fuck the Aussies and their scheduling, I'm not getting up at 5am after sitting up half the night to watch another, "they looked pretty good for half a game" effort and going to bed pissed off.