Goes to show how far Aussie league has fallen when soo is won by a team of senior citizens..go kiwi's
Last edited: Jul 9, 2015
Reactions: Mr. Muller

How's he a dick

Contributor
Not ideal for the Warriors, Hoffman injured and smith, Cronk, chambers didn't even have to do any tackling.

gREVUS said:
because he didnt want to ruin Darius Boyd's moment by allowing another person to kick the last goal in Boyd's last game. I thought it was respectful personally, but i guess its perspective.
Click to expand...

It was Hodges who was playing last game
Reactions: gREVUS

cro.warrior said:
It was Hodges who was playing last game
Click to expand...

Contributor
honestly i would put that one down to Gallen, hes a crap player and only there to lift the team isnt he (great job, great job) and Dugan who looked gun shy, more than the rest, who were about equal in blame. They had no answer to the intensity brought by QLD. Hope the warriors can lift on the back of the high Lillyman will have this weekend.

I hereby lay the blame on:
Hopoate
Tamou
Hodgkinson
Pearce

Once we get rid of these nuffies, we will be back to add to our 1 series win in the current decade.

Thurston is so freaking awesome. I long for Shaun Johnson to have his playmaking nous.
Reactions: runituptheguts and Inruin

Amazing how Queensland can't seem to win a game without Cronk in the team...

The last 6 origins, Queensland have won three with Cronk and lost three when he's been out...

He doesn't look that flash. Bit of a gumby with ball in hand really. Just passes and kicks... But he seems to be the deciding factor...
Reactions: OMG

Contributor
What an embarrassment. Cant believe I went out and blew money to watch that shit.

All week the NSW press has been riding David Klemmers dick and he goes missing along with half his team. Biggest build ups ever. Mitchell Pearce was disgraceful on defence. QLD ran at him close to the line 3 times and scored in all 3. Really limp performance from him. TBH he wasnt the only one in that team.

NSW tried to play it safe and grind. QLD came to play.

Awesome game from Jacob Lillyman. Um, since when has he has a sidestep in his game? Used it to great effect twice last night.

Anyway. Back on social media trolling cockroaches who have gone rather silent... 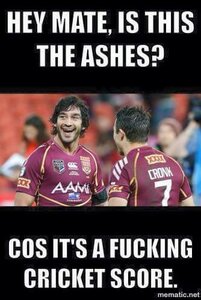 with our kiwis team at the forefront of my mind i have to say......i love origin.

at the end of the game cameron smith went to shake the nsw' players hands only to be pulled back by Thurston who said......"F*ck them"

Thank you JT, thank you. And so continues the rift between NSW & QLD players when they come into origin. That kind of hatred must hang around.

He was solid last night, even put on a step on the 'beast of belmore'. I hope one of the boys put a shot on tamou for Bull when we play the cowgirls, I can't stand that dickhead.

watched soo last night, what a joke. Queensland couldn't get out of their own half to save themselves, but never fear nsw were there to cough up a penalty and help them out. Then Cronk was there to kick them out of danger anyway. Lilyman did some good runs. But apart from giving away penalties I don't know WHAT nsw were doing, they were just hopeless, rolling around, missing tackles, looking tired. Zimmer frame brigade won - lol! what's that saying? Too old, too slow, too good? thurston said they had a point to prove; I'd say point proven.
Last edited: Jul 9, 2015
Reactions: koolkat

Glad Tamou chose NSW and not NZ and it wasn't very Klemmer to talk shit before the game.
Reactions: koolkat

DANZ said:
at the end of the game cameron smith went to shake the nsw' players hands only to be pulled back by Thurston who said......"F*ck them"
Click to expand...

Apparently as everyone finally left the field, Lockyer went up to Cam Smith for a casual chat as old friends - but got completely snubbed, purely because he works for Channel 9...

Marshthedarsh said:
Apparently as everyone finally left the field, Lockyer went up to Cam Smith for a casual chat as old friends - but got completely snubbed, purely because he works for Channel 9...
Click to expand...

seems he snubbed him at half time as well. But Channel 9 knew it was coming. I personally think they did a dog act by putting out a 1 sided story, something that has become all to common in media recently.
https://www.triplem.com.au/sydney/s...aptain-cameron-smith-boycotting-channel-nine/
Reactions: koolkat, Johnnyray and mt.wellington

a few things have become apparent to me...

The biggest issue NSW have is that the vast majority of rugby league media come out of sydney so they get caught up in the hype-machine that pumps up these garbage players.

And... out of those two teams forward packs only Parker and Smith are demonstrably better than what the Kiwis can put out on the park.

Is Hopoate the TL of the Blues? I don't see what that guy has to offer and how on his eels performance he was even picked? Ennis is a complete and utter grub and i hope they were sledging him along the lines of he was lucky to be there and he's only second best as fairy farah was injured. Some of these NSW selections were a head scratcher though. Thurston is a legend, just a shame Cronk, Smith or Chambers didn't pull up lame and Hoffster did.