Is it time to change colours for a few weeks and pick sides?
From way left field what about a halves combo for the Blues.....Pearce and Benji Marshall?!!!

way2sharp said:
Is it time to change colours for a few weeks and pick sides?
From way left field what about a halves combo for the Blues.....Pearce and Benji Marshall?!!!
Click to expand...

Yup should qualify under the residency rule!

Is that selection series for the international team that just got hammered for the third straight game?

way2sharp said:
Yup should qualify under the residency rule!
Click to expand...

No he wouldnt qualify at all. He only moved to Keebra at 16 didnt he???
Reactions: way2sharp

Even IF he did qualify via residency rules, Benji would need to make himself available for the Kangaroos (even if not picked) to be eligible for the SOO series. As a proud kiwi, i dont think Benji would ever contemplate that. Heres an article he wrote on the topic of kiwis playing in SOO 3 years ago.

As the captain of New Zealand, I find it incredibly difficult watching our players turn their backs on their country, preferring to play State of Origin. Everyone is entitled to make a decision that suits them, but it is disappointing. It's heartbreaking to know some of the talent we have in New Zealand is being lost to Australia, who have enough talent.
Something has to be done. Two of the biggest front-rowers in the game, James Tamou and Sam Kasiano, are both born and bred in New Zealand.
Now it appears they have pledged their allegiances to NSW and Queensland respectively. Ben Te'o is the latest Kiwi-born player to pledge his allegiance to the Morons.
I can see the appeal. If you were a young player and you had a coach such as Mal Meninga or Ricky Stuart in your ear, saying they want you in their team, it would be difficult to knock back. I think some of them might have been talked into it.
Advertisement
The payments for Tests need to be considered. With talk of players earning up to $50,000 for an Origin game in the future, players are going to be enticed to play.
For me, money doesn't come into it. It's about where you're from, the pride of representing your country, the pride in your family. That outweighs the money for me. But for a younger player, that choice is more difficult. I know it would be very difficult for some young players to say no to that opportunity.
I did represent Australia, at schoolboys level, but my situation was very different. I did so out of spite, not because of money. I didn't make the junior Kiwis squad because they didn't even know who I was back then. It was a payback scenario for me. But when I was standing on the other side of the field in Auckland, facing the haka, I felt lost. I was miming the words to the haka and singing the New Zealand national anthem before the game. It didn't feel right. I knew there and then I wanted to be on the other side of the field. I didn't really feel like playing after that.
It took me until I was on the other side to realise where I wanted to be. I was lucky enough this happened early in my career, so I could change my mind and pledge my allegiance to New Zealand. Once these Origin players get on the other side of the fence, they don't have that chance to change their mind. The damage has been done.
I honestly think this is damaging Origin too. If I was a potential NSW or Queensland player, and I'd seen Kiwis taking what could have been my spot, I would be annoyed and frustrated. Down the track, if it starts to become even more of a regular occurrence, what then? What happens if there are 10 Kiwis in a State of Origin team? I'm sure Australians would not want their NSW or Queensland teams full of Kiwis. Origin is built on culture.
The whole situation dulls Origin for me a little. I don't have the solution. But I know one thing; something needs to be done, whether it is tightening up eligibility laws further, or ensuring there is more equality in the representative match payments. There are too many factors which come into play for younger players. And we, New Zealand, are going to keep losing our talent to Australia. We lost Karmichael Hunt, Tamou and now Te'o. Who's next?
Having said that, I'm looking forward to watching Wednesday night's decider. I would love to see NSW win, for Origin and for Robbie Farah. I think they're a big chance. I want Robbie to win primarily because of what he has been going through, but also so he returns to the Tigers with some confidence and helps us get our season back on track.
It will be tough in Brisbane, but the Morons will be a different team without Billy Slater. Even though Greg Inglis is a daunting prospect, they won't have the luxury of Slater sweeping out the back, or taking an inside ball off Cooper Cronk, or chasing kicks. It will be a very different Queensland team without Slater.
To be fair, Queensland haven't played their best this series, so they'll be looking for improvement. But the forwards aren't as scary as they used to be. The Blues have many things in their favour. Their halves have been in good form for their club and, while losing Glenn Stewart is a blow, I know Robbie can play a significant role. Once the emotion of the first 20 minutes is out of the way, I think it will come down to who plays the most attacking football. The Blues' attacking power is strong. If they get it right, and play to their potential, they will win.
Click to expand... 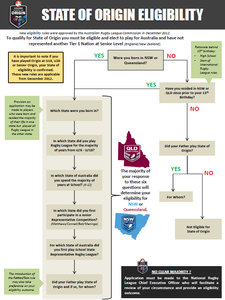 Contributor
^ those rules are actually quite sensible, apart from the weird daddy clause.

Initially thought it was a meme or something, "have you visited the theme parks on the GC?" Yes = Queeeenslanderrrrrr!
Reactions: way2sharp

Benji is eligible for all three countries. Josh McGuire flew to Samoa once so he's alright.

The second Greg Bird made that tackle on Nightingale I yelled at the tv "You're gone mate!" as in he'll be out of Origin I. Looking like he'll miss Game 2 as well.

Josh Reynolds is a fucking idiot. Tripping has probably lost him his spot. Apparently the mail is Hodkinson and Pearce. Maloney next in line though.

Reynolds only looking at 1 week for the trip... Got off the other charge. What an absolute farce!!!
Reactions: way2sharp

Little harsh. His mum was born in Auckland, and is Samoan hence why he is eligible for Samoa (and Aus and NZ). Same way Hayne or the Sims bros were eligible for Fiji.
Reactions: runituptheguts

Reynolds gets one week, great. He helps QLD with his brain snaps more than NSW. I hope he does get selected, his lack of ball playing is really no danger to a defensive line.
NSW have got to be long odds this year. There outside back stocks look pretty thin. All the boys who got selected for AUS by Sheens: Mansour, Walker etc all got found out pretty quick by the kiwis and couldn't defend under the pressure of rep footy. NSW best bet might be to go with the Knights wingers if only for experience.
I'm hopeful of a good series I just hope we don't get anything like game 2 last year with 80 mins of late hits and one out running. If Refs use their whistles appropriately this should be a cracker of a series.
A big question is, which Aussie forward from each team will bring some passion and pain like the Kiwis did last night? Cause Aussie looked soft and slow last night, and that is not what Origin is supposed to be about.

Thanks for clearing it up Mt W.
Hard to hate the Blues as much with Benji playing!
And Bird not!
Reactions: mt.wellington

Contributor
My view is that Qld will take it if Slater is playing and wont if he isnt. But i'll honestly say i dont remember either team being so short of real experienced quality like this. QLD is over the hill and NSW just isnt there yet.
Reactions: Harlz 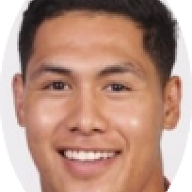 Greg Bird is seeking a downgrade on dangerous throw charge. If succesful he will be free to play Origin !, if not he is out of the series. Here hoping NSW need to move past him.

Contributor
Only ever gone for the Morons because theyre the only team that has had Warriors playing for them. Be changing my allegiance if Ryan Hoffman gets the call up.

Some may see that as odd but its more fun when youre backing a team and without the Warriors connection I couldnt give a shit about Australia let alone NSW or QLD...
Reactions: Defence, ACT Warrior, ShaunJohnson7 and 2 others

mt.wellington said:
Only ever gone for the Morons because theyre the only team that has had Warriors playing for them. Be changing my allegiance if Ryan Hoffman gets the call up.

Some may see that as odd but its more fun when youre backing a team and without the Warriors connection I couldnt give a shit about Australia let alone NSW or QLD...
Click to expand...

What if Bull is playing for QLD again?
Reactions: zegy

Paleaaesina2the20 said:
What if Bull is playing for QLD again?
Click to expand...

Stick with the status quo. Still more Morons than Blues which isnt hard as the Blues are yet to have one...

Contributor
a few kiwis have played for Qld over the years too as well as warriors, hence why I tend to support them.

Plus NSW tends to have a load of idiots playing for them. Between Reynolds, Ennis, Gallen, Bird, Watmough, Tamou... it is SO easy to dislike them.
Reactions: koolkat, ShaunJohnson7, Miket12 and 1 other person
Show hidden low quality content
You must log in or register to reply here.
Share:
Share