If he's guilty he must be deregistered.
Reactions: Swanley

Iafetas Kickstand Wang said:
If he's guilty he must be deregistered.
Click to expand...

They didn't deregister Robert Lui though... I agree with you completely, but Lui was reported to do what it is alleged that Semi has done...

These accusations are over a year old. I haven't seen his ex partner but she must be made of granite because if Semi kicked her in the stomach when she was nine months pregnant she would likely be dead or ended up in hospital. I can't believe it.

Freddie Futler said:
we don't believe he could do something so common," Waqavatu told News Corp.
Click to expand...

your all talking about if he did it or not, which well never know, but you missed this!

This story get's uglier by the day, it's tragic if true but something smells fishy about the whole thing to me. The timing of the DVO and the now the accusation which is in the extreme to say the least.

We've seen league players targeted in this way before, SKD comes to mind straight away. I'd wait for all the facts to come out over this but it's officially a "shit storm" now the media gathering more details, we know they'll be up to their fucken eyeballs in it those gossip mongers.
Reactions: BiggerD, surfin and mt.wellington

6 Again said:
I'd wait for all the facts to come out over this but it's officially a "shit storm" now the media gathering more details, we know they'll be up to their fucken eyeballs in it those gossip mongers.
Click to expand...

How would you feel if you were an eels fan?
They seem to lurch from one crisis to another, very dysfunctional club.
In comparison the Warriors have very few problems apart from the coaching dramas and one night out Red bulling.
Toggle signature
Pay it Forward
Reactions: fizurg and bruce

Freddie Futler said:
How would you feel if you were an eels fan?
They seem to lurch from one crisis to another, very dysfunctional club.
In comparison the Warriors have very few problems apart from the coaching dramas and one night out Red bulling.
Click to expand...

Yeah, I certainly feel for the Eels supporters, no fan should have to put up with what they have this season and there's more pain yet to come. The only silver lining I can think for them at this stage would be getting Jarryd Hayne back though I can't imagine how he'd feel coming from one of the most professional sporting systems on the planet to a club that's in absolute tatters.

Your right of course our problems aren't so big at the Warriors, Cappy can fiddle with the wing position all he likes as long as the clubs not over the salary cap and none of the players are kicking babies.
Reactions: mt.wellington, eudebrito and Freddie Futler

Jay M said:
They didn't deregister Robert Lui though... I agree with you completely, but Lui was reported to do what it is alleged that Semi has done...
Click to expand...

Since Jim Doyle created the NRL Integrity Unit things have changed. Their first victim was Todd Carney. Theres yet to be someone who has been done for MAF but it'll be interesting to see comes of it. The timing of it with Women in League round coming up isnt a good look for the game but just as some idiots were so ready to hang SKD without a fair trial I'll reserve my opinion on Semi himself until after the justice system has dealt with him...
Reactions: Jay M and surfin

Regardless of what happens now his name is tarnished weather hes guilty or not
Reactions: Defence 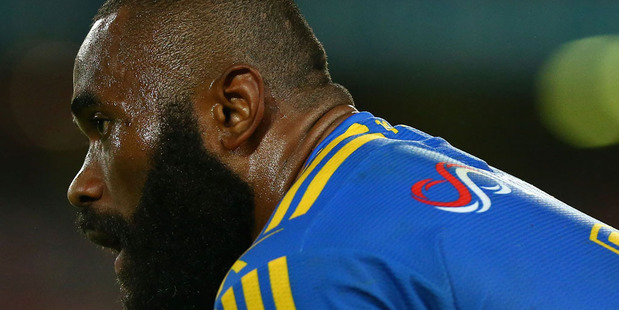 Semi Radradra has returned to Sydney from Fiji after two weeks away and has been immediately detained by Sydney police in relation to domestic assault allegations.

Radradra flew into Sydney on the same flight as Jarryd Hayne on Thursday night and a police escort was waiting to whisk him away from the back door of the airport.

"A 24-year-old man has been detained by police at Sydney airport tonight," the statement read. "He has been taken to Mascot police station where he is assisting police with inquiries in relation to domestic violence matters."

Hayne spoke at the airport about Radradra.

"I'm more worried about the person himself than the athlete, that's the most important thing," he said.

"It would be great for him to stay there, for sure.

"Semi is back here now, he's obviously back at Parra and back playing.

"I spoke to him and by all accounts he's come back here and will play this weekend.

"He's a marquee guy. He's the biggest attacking weapon, along with (Corey Norman) and (Kieran) Foran, but he's the icing on the cake."

It was on Wednesday morning that news broke Radradra's former partner Perina Ting had filed for an apprehended violence order against the Eels star.

She alleges her then-partner assaulted her multiple times over a seven-month period during 2014 and 2015.

"I am coping," Ting told The Daily Telegraph. "It has been very stressful ... my mother flew into the country yesterday. No one is above the laws of this country."

The other two reported incidents are understood to include similarly untested allegations that Radradra punched Ms Ting and pushed her against a wall.

It has put an ugly twist on a situation that already appeared to be getting out of control.

Radradra's future in rugby league is up in the air as mail grows strong he will ditch the Eels to join overseas rugby on big money.

Parramatta has threatened to demand compensation of up to $500,000 from the Fijian winger if he does break his contract.

Radradra was granted leave by Parramatta following the club's round 15 game a fortnight ago.

He flew to Fiji and has been on his home island since, only arriving back in Australia on Thursday night.

I take it Sami won't be getting custody of the kid now.

The Truth said:
I take it Sami won't be getting custody of the kid now.
Click to expand...

Depends if hes guilty or not.
Reactions: mt.wellington and zegy

'He flew to Fiji and has been on his home island since, only arriving back in Australia on Thursday night.'

And here I was thinking he was a true blue Aussie?
Reactions: mt.wellington and Freddie Futler

drunk_monk said:
Depends if hes guilty or not.
Click to expand...

It doesn't. A claim of abuse is all you need.
Reactions: dean

Troubled Parramatta star Semi Radradra has told the NRL club he wants to play against Cronulla.

Radradra snuck into training on Friday morning and bypassed the media as coach Brad Arthur spoke to reporters.

Radradra's first training session in two weeks lasted 45 minutes and it came hours after he was arrested by police after his arrival in Sydney from Fiji.

He was charged with three counts of domestic violence against his ex-partner in 2014 and 2015.

Got to agree with Paul Kent on NRL360 last night about Semi and Hayne about this...


Eels are a club in free fall and yet their star player and potentially best player ever are taking the piss!
Semi wants to be paid buckets of cash to play league...so it's time he started acting like a bloody professional. And Hayne is treating this as a big joke... regardless of the fact that there are accusations of domestic violence!!