Beast Mode said:
BRACE YOURSELF for Aussie Media attacks from across the ditch
Click to expand...

Don't you just love it?

Contributor
Although my fan support for the All Blacks have waned over the years (replaced by the following the infuriating warriors mostly) pretty fired up about this final.

The media fawning (when Saville on one news or someone of his type interviews an all black, their voice gets an almost sexual undertone to it) and the nationalistic gibberish (going on FB and seeing “so proud to be a kiwi” after a team that almost always wins, has another win, does my head in) but ignoring all that, the team has a lot going for them.

Lot of long serving players, greats of the game, looking to go out on a high, they have toned down some of the arrogance of previous years (we don’t do drop goals, etc.) playing a good, smart style of game and have a worthy opponent for the final.

In a way its good to have Australia back as a competitive foe, instead of social media focussed yobbos who crumble at the slightest bit of pressure (sounds familiar)

Hope we smash them.
Reactions: mt.wellington and Jay M

This is going to be a heck of a contest really looking forward to it. Seems like another add on test match between these two at the end of the season except the stakes are a little bigger.

If you go 'bone deep' as Hansen likes to say nobody will underestimate this ozzy team they have the pedigree to win this there's no doubt about it.

Ozzy are the current Rugby Championship winners and they've won both their World Cups in Europe so their at an advantage in that sense, let's not forget the 91' semi when Campese ran rings around our team and knocked us out?! their the favourites in my mind.

Chieka's coached in Europe he knows those conditions he's had success with Leinster and his Waratah boys are performing for him. Larkham as assistant in the background lead the 99' Wallaby team to World Cup victory, this is a smart brains trust here. Mario Ledesma respected scrummager from Argentina has helped transform their pack into a more competitive unit.

NZ looking to defend and be the first to go back to back while the ozzys are looking for a third World Cup overseas, pretty intriguing scenarios.
Reactions: mt.wellington

Contributor
Great game from the ABs. First back to back winners ever. Good to see so many legends of the game leave on a high note...

Contributor
Well done ABs massive effort to go back to back
Reactions: bruce 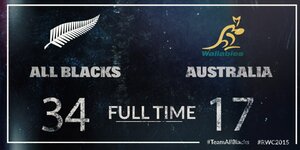 Contributor
Congratulations Rugby fans and the All Blacks.

One thing this whole result says to me as someone that doesn't watch the game, kind of destroys the union belief that it's a global game. After all realistically there is normally only ever 3 teams that are going to win, unless one of those 3 teams knocks out one of the others in the semis and Johnny Wilkinson is the kicker in the default finalist. The minnows get smashed except for the occasional brave showing, but like league take away the expats and they don't have a team. Actually the only real difference I can see is league people aren't stupid enough to believe they are anything rather than a minority sport globally and getting a photo of a has been celeb in a team jersey doesn't make them a hardcore supporter. Of course that doesn't mean I think David Hasselhoff or Kevin Costner are has beens, they are genuine Hollywood A listers, hell one day they may be nearly as famous as the Kardashians
That said any team sticking it to the Aussies, league, union, netball or knitting is fine by me.
Reactions: Matulino's Left Shoulder

And Crowes a knob jockey of the highest order.
Reactions: Sup42

Personally i don't like rugby, never watch it but hats off to the All Blacks, good on them for keeping up the tradition with the egg shaped ball and beating those aussies. Did see a couple of highlights on the news and man, some of the calls for penalties are so soft, ............................... Should play a hard game like league......... Would have been slightly interested to see how someone like Nonu would have gone in league, powerful chap.

surfin said:
And Crowes a knob jockey of the highest order.
Click to expand...

They've got Prince Harry but....

That was the most dominant tourny by the ABs since 1987.

I don't think the ABs will dominate like that in the next cup, We won't have McCaw, Carter, Conrad Smith, Nonu, SBW and maybe Ben Smith who will be into his 30s.

Nonu will be missed most I think because theres not really a standout replacement, he runs direct, has a great burst of pace, power and a step to change angles, hes a handful every carry. He would have been a great league centre.

I don't think league fans have an argument regarding soft penalties, the offences are practically the same, and I think the refs are more pedantic in league when it comes to head high tackles. So much so that now players lay down like soccer players to milk a penalty.
Last edited: Nov 1, 2015
Reactions: 95 'til infinity and ShaunJohnson7

wallacenz said:
Nonu will be missed most. He would have been a great league centre.
Click to expand...

Looks like Maninga....(I think that's the best center in League IMO). That burst of speed though.....showed those much leaner Aussie backs.

Sup42 said:
Looks like Maninga....(I think that's the best center in League IMO). That burst of speed though.....showed those much leaner Aussie backs.

I think Hurrell would be just another good centre in rugby. I could be wrong but wasn't the rumour that Auckland rugby didn't go after him because they thought he lacked work ethic (but then they passed on a lot of talent from his era). I either heard that on radio sport of read it somewhere, I'll see if I can find it.

I think this is a related article: https://www.nzherald.co.nz/rugby/news/article.cfm?c_id=80&objectid=10783681&ref=rss

Graham Edwards, a student careers adviser and Auckland Grammar first XV manager, was a mentor to Hurrell. The youngster wanted to stay in rugby union, the only game he knew, and I understand Edwards tried to find Hurrell a club to play for after the Auckland Rugby Union advised him to do that. A couple of clubs were keen but unable to financially help Hurrell, who needed around $20,000 for fees to meet student visa requirements.
Click to expand...

Women's refuge centers around the country are taking a couple of days off, and Prozac sales are plummeting as I write this...

Some pretty cool shots at the end of the game with some of the retiring players holding the cup. McCaw and Carter, Nonu and Smith etc.
Reactions: mt.wellington and mode81

All Blacks were farkin awesome I'm proud of all of our Kiwi sports people when they do well, congrats to Richie McCaw and the All Blacks you make our little country proud.
Reactions: mt.wellington

Contributor
Have to laugh at some reporters who said DC was past his best and hadnt had enough game time to warrant a place. The guy is the best 1st five ever and will go down as one of the games best ever. Fitting end to his last game as an AB. Especially kicking the last goal with his right foot ... 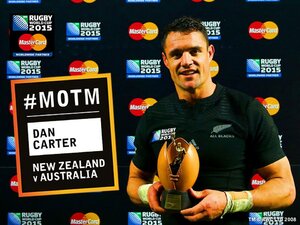 General Another All Black wing, Joeli Vidiri has past away