​
NZWF Official thread for the 2021 Round 20 Warriors team list and discussion...

Do we have 17 fit players left for the next round?

We are so fucked
Peta hiku captain playing 5/8
Sean O'Sullivan other half
Reactions: CHURCUZ, Stalefish540, Defence and 5 others

Katoas named but Pride Patterson on the bench....
Reactions: Worried2Death

Otukolo named to start
Brownies had enough of Jazz at 9 he's in 17.
And Kodi is in his best position 14.
Reactions: Hadyn

AlexM said:
Katoas named but Pride Patterson on the bench....
Click to expand... 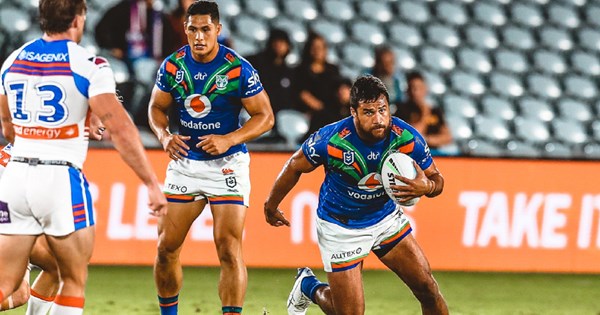 Peta Hiku's back from a long injury lay-off, named in the halves and as captain for the Vodafone Warriors' clash against Wests Tigers.

It says on the website TBC regarding extra reserves...
Maybe we are loaning or jagging someone?

I actually like Peta at 5/8
I'm a fan , if we win , lol , it'll be a shame to see him play for the cows
Reactions: J_P, Worried2Death and BeastMode

Vodafone Warriors prop Leeson Ah Mau has today been granted a request to return home this week before the Government pauses its Covid-19 travel bubble with Australia for at least eight weeks.

Following yesterday’s announcement that captain Roger Tuivasa-Sheck was finishing his career with the club to fly home, Vodafone Warriors CEO Cameron George has confirmed the experienced Ah Mau will also miss the rest of the season.

“With his family now back home, Leeson asked for permission to be reunited with them back in Auckland,” he said.

“This is a very difficult time as we all know. New Zealanders have only until the end of the week to fly home. If Leeson doesn’t get home this week, he would be over here on his own until the end of September and potentially longer.

“The needs of our players’ families have always been a priority.”

Before today’s announcement, the 31-year-old Ah Mau was in line to be the only player to line up in every game this year, making his 18th consecutive appearance in last Saturday’s encounter with South Sydney.
Reactions: Defence, wizards rage, BeastMode and 2 others

Vodafone Warriors prop Leeson Ah Mau has today been granted a request to return home this week before the Government pauses its Covid-19 travel bubble
Click to expand...

Ballsy call with no contract for 2022
Reactions: Stalefish540, RTS’s calves, Ever Hopeful and 14 others

Cces said:
Ballsy call with no contract for 2022
Click to expand...

Didn't we have someone do similar last year - Paasi maybe? Ended up in the UK which wasn't surprising.

Lol what is this shit. Sean O'Sullivan and Hiku in the halves and Otokulo to start, gee wouldn't want to be Kodi haha
Reactions: Stalefish540, bangbros18, wizards rage and 1 other person

The naming of Nikorima as a bench utility with Hiku playing as a makeshift five-eighth is a strong indication that they see him primarily as a bench utility for 2022 if he stays.
Reactions: Stalefish540, RTS’s calves, J_P and 12 others

I've seen worse teams in the dark days of the late 90s or even some of the line ups SK persisted with.
It won't happen but Walsh to the halves (yes I know Brown won't be moving him) and Vailea in the outside backs would be good to see.
Reactions: Worried2Death, BeastMode and Rick O'Shay
Show hidden low quality content