Thread to share your thoughts on the Round 18 game between the New Zealand Warriors and Penrith Panthers after the match. Name your Man of the Match, discuss the coach, captain, starting team, bench, opposition, game tactics, substitutions, errors (or lack thereof), penalties (or lack thereof) highs, lows, refs etc.

Gave it an F, won’t be suprised if we finish 15th this year. Fuck this team……
Reactions: Old Sid, 6Again, Waiting For Premiership and 10 others

All things considered, quite a heroic effort.

Most blokes put in, big time.

Big question marks on Katoa for me. If he can't show some energy like the rest of them in a backs against the wall effort, then when will he? He has more physical talent than most, but somehow still plays like a wet blanket.

Concerns over Dallin Watene-Zelezniak too. Can't fault the effort, but he just gets owned physically.
Reactions: Worried2Death, danyooll, dantheman and 5 others

What?? Cmon man that was real gutsy effort. Best game of the year for me. I give them a A+ , as good as a win for me.
Reactions: Murraytd, W.A warrior, Kalcod and 25 others

Are you fucking serious? Did you see what happend?!
Reactions: bringmethehorizon, HoRneT041, Old Sid and 18 others

All I want to say is, I’m proud of this team.

2 years playing away from home, having to move so consistently due to Covid.

Battling injuries all year - and in this game alone, 4 major injuries that essentially left us with no bench for over half the fucking game.

Change of ownership and coach in the last few seasons.

But this game in itself was a metaphor for how we’ve had to battle so hard the last few years.

No home games - and the one we do finally get, gets taken away from us as soon as it could.

We’ve struggled to field a consistent 17 man team all season - with mid season transfer to boot - no time to build combos etc.

The one game we are able to field a decent side - we lose Tohu Harris, Roger Tuivasa-Sheck, Egan (who has been phenomenal this season) and Berry (whose starting to show why the club rate him so highly).

We battled valiantly but fatigue was always gonna set it.

Panthers fans, bonehead media gonna get all giggly after this.

Another reason to kick the Warriors when they are down.

I think this season should show upper management the importance of a strong medical team - got to keep this team healthy.

The team will be stronger next season with troops back, Shaun Johnson homecoming etc.

But injuries can derail any squad - we would’ve won today if not for the game day injuries, because the Panthers had their own injury woes as well.

It fucking sucks but whānau hold tight - our time is coming… 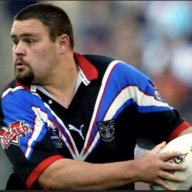 That’s what it means to be a warrior. I applaud that performance. Yes, we lost. But we had heart. That’s what this club is about
Toggle signature
Muscling up and out thinking the opposition
Reactions: Murraytd, Citygirl, WA supporter and 30 others

Performance of the season we played probably at 50 percent but our effort today was at 120.
That's all we ask as fans just put the effort in each week and we'll be bothered to tune in. They can hold their heads up high today. Well done.
Reactions: J_P, WA supporter, Worried2Death and 12 others

The delete your account and go follow the storm or something. Piss off.
Reactions: samo3987, drunk_monk, bringmethehorizon and 29 others

Given the circumstances I thought we gave it our all. If only we had given this many fucks during our last few games, we wouldn't be out of finals contention. Still remember us putting on almost 30 pts in the second half against a 14 man raiders side. We conceded half that with one less man against a much better side.

On a brighter note, this front row of Lodge + Addin Fonua-Blake has the potential to be one of the best in the comp. When we were fully fit for the first 20 mins, I thought they actually had the upper hand over the Panthers front row. Berry is looking the good, shame about the injury though. Think we've found ourselves our center pairing now. Montoya deserves his wing spot moving forward as well.
Reactions: frankspence, RTS’s calves, J_P and 15 others

Addin Fonua-Blake and Lodge were seriously huge i have no doubt we have the best two starting front rowers in the comp
Reactions: frankspence, john nick, Citygirl and 29 others

Lance155 said:
Are you fucking serious? Did you see what happend?!
Click to expand...

Proudest I have felt for a long time of these boys.. No bench 2nd half against penrith?!? Fucking proud as... Let's hope this is a turning point for our team. Awesome character boys!!!
Reactions: RTS’s calves, Murraytd, J_P and 15 others

100% Mt. Smart is built on an ancient burial ground and we are cursed.
Reactions: Warrior482, Worried2Death, HoRneT041 and 10 others

Better than a win against a rubbish side for mine.

Once we lost the entire function of replacements this became a war of bravery in the face of impossible odds and the Warriors stood up in the tradition of all the great underdogs.

No one knows the leader of the Persians.

Every one knows the leader of the 300
Reactions: Murraytd, Burncity warrior, HoRneT041 and 7 others

Proud. Addin Fonua-Blake & Lodge. Unbelievable. 80 mins at prop, against a strong pack. Kodi is a better hooker than half. Walsh is gifted, in his athleticism but more so in his mindset. We showed some real heart today. Warriors of the past would’ve dropped lip, but this is a different team. We’re not getting the results but we’re a far better team. Proud.
Reactions: bringmethehorizon, J_P, Burncity warrior and 20 others

Boot this troll. You’re an absolute idiot and not welcome.
Reactions: john nick, J_P, Burncity warrior and 19 others

Great effort from most players left on the field... The so called forward pass and disallowed try killed us....
Reactions: J_P, Sup42, HoRneT041 and 2 others

You must have been watching a different game.
Reactions: Citygirl, bruce, kos and 1 other person

Great effort great heart (except you Kodi - not you).

If there’s an ok loss that was it boys well done.
Toggle signature