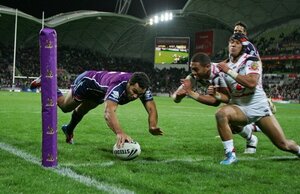 Vodafone Warriors head coach Brian McClennan has today named an unchanged line-up for Sunday’s 13th-round NRL clash against the table-topping Melbourne Storm at Mount Smart Stadium (4.00pm kick-off).
He has retained the combination fielded in the 22-24 loss to Wests Tigers 11 days ago with Glen Fisiiahi chosen at fullback instead of Kevin Locke, who has had next to no football for two months after being out of action with leg and sternum injuries.
Locke was initially a chance to turn out for the Vulcans in the New South Wales Cup last weekend before later being scratched.
McClennan said Locke’s readiness to return to football was still being monitored.
“Glen came back into the side against the Tigers and did a good job for us. We have a lot faith in him,” he said.
The Vodafone Warriors will face a Melbourne side back in impressive form.
The Storm had their only loss of the year so far against Cronulla in the 10th round when they were beaten 12-10 at Toyota Stadium but, after their bye in round 11, they dismissed Brisbane 34-10 last Friday night, just 48 hours after this year’s opening State of Origin clash.
“With their Queensland players backing up, the Storm were really impressive the way they put the Broncos away,” said McClennan.
“It’s a massive challenge whenever you play against them and it’s always a huge occasion for our club taking them on. It’s one we look forward to and this one is no different.”
McClennan said there was cause for real disappointment with the loss to the Tigers, especially the way the side had played in the second half.
After leading 10-0 at halftime, the Vodafone Warriors quickly conceded their lead, regained it but then fell behind again.
The players had a few days off late last week but were back training yesterday before having their first field session of the week at Mount Albert Grammar School today, the second time this season the club has headed out into the community to train at a secondary school.
Mount Albert Grammar has produced a number of Kiwi rugby league internationals including Fred Ah Kuoi, Sonny Bill Williams, Steve Matai, Thomas Leuluai and Sam McKendry.
Sunday’s clash (Suzuki is the match day sponsor) will edge prop Ben Matulino closer to his 100-game milestone, this being his 98th appearance having played all 28 matches last season as well as each of the side’s 11 games so far this year. He is on target to play his 100th match in the away clash against Cronulla in the 15th round.
The Michael Moore Trophy will be at stake on Sunday, as it always is when the Vodafone Warriors face Melbourne. The Storm hold the trophy after their Anzac Day victory at AAMI Park. The Vodafone Warriors won two of the three encounters between the two sides last year.
Sunday, June 3
Mount Smart Stadium, Auckland
1.45pm: NYC: Vodafone Junior Warriors v Melbourne
4.00pm: NRL: Vodafone Warriors v Melbourne

Would of dropped Lousi...otherwise its all good in the hood

Hmmm a bit gutted about Locke not being back but at least it gives Fish another chance at the back... Unless this is another one of Bluey's "tricks" and will name Locke later on in the week?

FFS where is Kevin?? And wtf is this Locke playing NSW cup bs?? If he's fit, why the hell aren't we rushing him back in to the side?

I think our attack and our defense has suffered (further) since Locke has been out.. We need a fullstrength team to win this and he is crucial to us. I'm predicting a loss unless we play out of our skins..

That's one word away from being very kinky...

Good team. Given our performances at home recently, I'll fearlessly predict Warriors by 8 - 30-22. Boy we gotta get our defence sorted, but if we're still winning...

Haha you know the "tricks" where he will name one line up and then change it a few times before kick-off...

Does anyone know if the Vulcans are playing home or away?

Hurrell to score 4 tries...20,069 crowd and Matulino to unleash the shoulders of doom on Jason Ryles..... Warriors win 29-28 in golden point
Reactions: RobRoyMcCoy and scottyb

mean solid.. going to be a hard game need our forwards dominate again

i cant say ive been impressed with our forwards latley, but we do turn up for 2 teams, the broncos and the storm. Im expecting a ripper of a game with lots of big impact followed by lots of cant believe that Billy did that (hopefully after a fumble)

i cant say ive been impressed with our forwards latley, but we do turn up for 2 teams, the broncos and the storm. Im expecting a ripper of a game with lots of big impact followed by lots of cant believe that Billy did that (hopefully after a fumble)
Click to expand...


our forwards played well when we played the storm in melbourne

Best time of the year to play the Storm. Two week break to clear up niggles. Us by 10.

Kaizen said:
Best time of the year to play the Storm. Two week break to clear up niggles. Us by 10.
Click to expand...

Disagree. We're good enough to beat them and when we beat them we want them at full strenght to make a statment to them and everyone else in the comp.
Reactions: gREVUS

Our old friend the News Limited Baby Boys. I take these games as a miracle every time we win. As every call will go against us, even though we usually are the better team. We still usually will these games, we're the Anti News Limited or something. Amazing our record against Melbourne is the best in the competition.

LoachNZ said:
our forwards played well when we played the storm in melbourne
Click to expand...


yea they did for about 65 mins anyway, then not so much. I normally dont rate our game after a bye, but think that given its the storm and they are running hot, well have a blinder

True, but when will we have a better opportunity to break some records


Empty win....Warriors are good enough to beat storm at there best
Reactions: Kaizen

Regardless, a win is a win. Even is we are a good enough to beat them at their best, I'd rather have an easier chance to do so.
Show hidden low quality content
You must log in or register to reply here.
Share:
Share