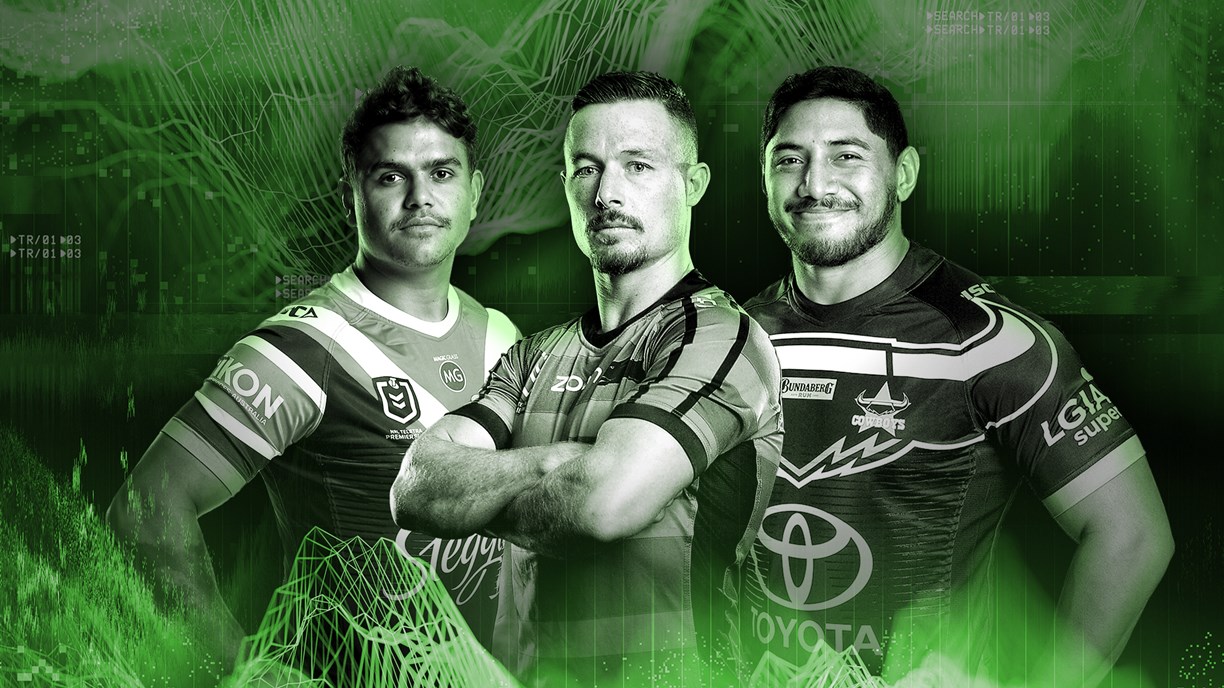 The votes are in, the players have spoken.

NRL.com polled more than 150 players from all 16 clubs to get their responses about a range of topics from the best players in each position, the leading coach and many of the biggest talking points in the game.

In part one of the two-part series, NRL.com unveils the players' choice for all positions, best coach, captain, debutant, Dally M Medal favourite, as well as which team - apart from their own - is the one to beat in 2019.

Cameron Smith has held onto his mantle as the players' choice for the best player while his Melbourne mentor Craig Bellamy has pipped Wayne Bennett to be the highest-rated coach.
In a worrying sign for the Morons heading into the Holden State of Origin series, the only two Queenslanders voted into the 17-man best team in the NRL have retired from the representative arena, Smith and Roosters half Cooper Cronk. 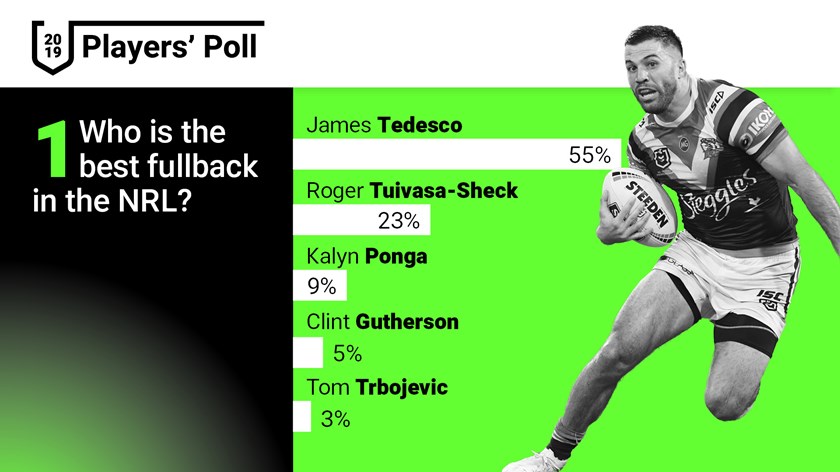 The verdict
James Tedesco has rocketed to the top as the game’s best fullback following the retirement of Billy Slater. The former Melbourne Storm collected 60 per cent of the votes in 2018, with Tedesco finishing in fifth position last year with just five per cent of the votes. However Tedesco’s breakout season last year, which saw him play for his state and country on his way to winning a premiership with the Roosters, now sees the former Tigers custodian ranked the game’s premier fullback by his peers. Roger Tuivasa-Sheck has leapfrogged Kalyn Ponga into second position, with Ponga dropping to third after finishing behind Slater last year. Four of the top five from last year remain, with Clint Gutherson replacing Slater in the group.

The surprise
Tom Trbojevic’s injury-riddled start to the year has likely impacted on his numbers, with the Manly No.1 suffering from being out of sight, out of mind. You could argue the same for Cronulla’s Matt Moylan.
2018 votes: Billy Slater (60%), Kalyn Ponga (11%), Roger Tuivasa-Sheck (10%), Tom Trbojevic (6%), James Tedesco (5%) 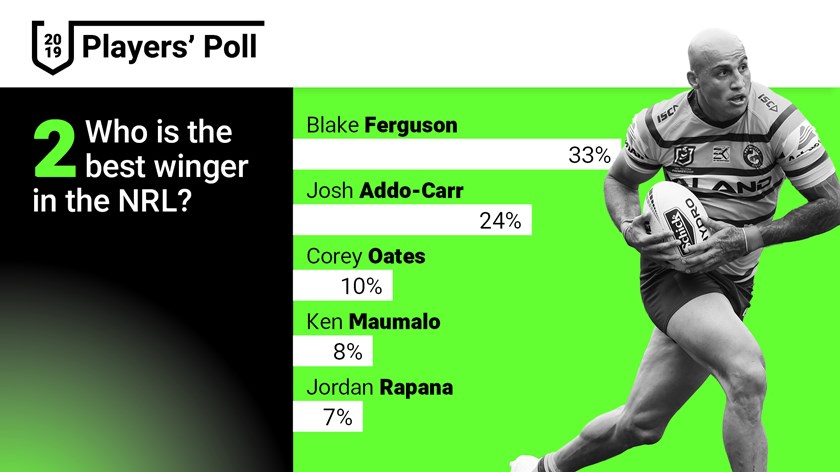 The verdict
Parramatta winger Blake Ferguson has knocked off Josh Addo-Carr as the premier winger in the NRL voted by the players. Ferguson’s red-hot start to the year hasn’t gone unnoticed by the players, with the flamboyant winger rising from equal fifth to first in the space of 12 months. It’s a timey reminder to NSW coach Brad Fittler just a few days out from the naming of his team for game one.
The surprise
Addo-Carr dropped to second, but the biggest fall was in relation to David Fusitua. The Warriors winger (second in 2018) has missed out on the top five altogether and has been replaced by teammate Ken Maumalo. New York Jets recruit Valentine Holmes is the other player no longer on the list. Interestingly there was no room for impressive Canberra youngster, Nick Cotric.
2018 votes: Josh Addo-Carr (27%), David Fusitua (21%), Jordan Rapana (12%), Valentine Holmes (10%), Corey Oates/Blake Ferguson (8%) 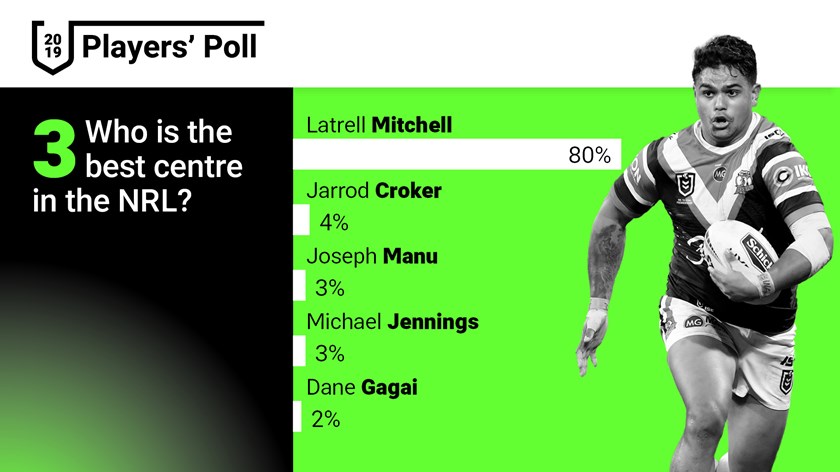 The verdict
In the most one-sided positional vote of 2019, Latrell Mitchell has knocked off nemesis Will Chambers as the best centre in the NRL. With a whopping 80 per cent of the 150 plus votes, Mitchell rose from fourth in 2018 to the leader of the pack 12 months later. Four of the top five centres from last year have lost their positions, with Greg Inglis (retired), Euan Aitken, Josh Dugan and Chambers all dropping out.
The surprise
James Roberts didn’t poll a single vote in 2019. While it’s clear to most that Mitchell has superseded Chambers as the best centre in the game, it comes as a shock to see the Queensland centre miss out on the top five. He only polled two votes overall.
2018 votes: Will Chambers (31%), Greg Inglis (21%), Euan Aitken (13%), Latrell Mitchell (11%), Josh Dugan (4%) 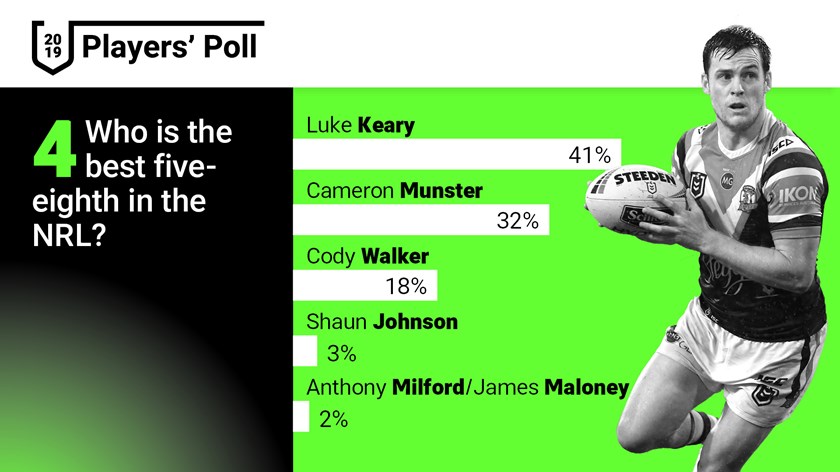 The verdict
Luke Keary wasn’t even in the top five last year, but on the back of the Roosters premiership and Australian jumper at the end of 2018, the Roosters five-eighth has one the battle in a hotly-contested category. Keary knocked off the two most in-form players of the NRL, Cameron Munster and Cody Walker.
The surprise
James Maloney was the overwhelming winner last year with 36 per cent of the votes, however Penrith’s horror start to the year saw him drop dramatically. He finished equal fifth, however he only polled two per cent of the votes.
2018 votes: James Maloney (36%), Gareth Widdop (20%), Cameron Munster (13%), Blake Green (11%), Anthony Milford (9%) 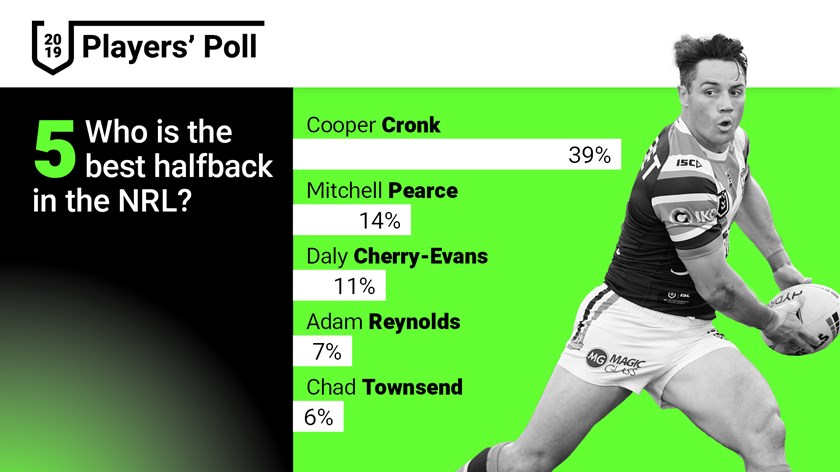 The verdict
Cooper Cronk will retire the king of the kids after polling almost 40 per cent of the votes in the best halfback category. Cronk takes over from his old Queensland teammate, Johnathan Thurston, as the best No.7 in the game voted by the players. Cronk finished fifth in voting last year, suffering as a result of the Roosters’ slow start to the season. Mitchell Pearce has rocketed up the leaderboard to finish in second position, with Daly Cherry-Evans, Adam Reynolds and Chad Townsend all new faces in the top five for 2019.
The surprise
Nathan Cleary finished third last year with 11 per cent of votes, with many expecting him to climb even higher with 12 more months under his belt. But like Maloney, Cleary has paid the price for his club’s poor start to the year and collected just four percent this year. Ben Hunt also experienced a huge drop, plummeting from second with just two per cent of votes.
2018 votes: Johnathan Thurston (35%), Ben Hunt (19%), Nathan Cleary (11%), Shaun Johnson (11%), Cooper Cronk (9%) 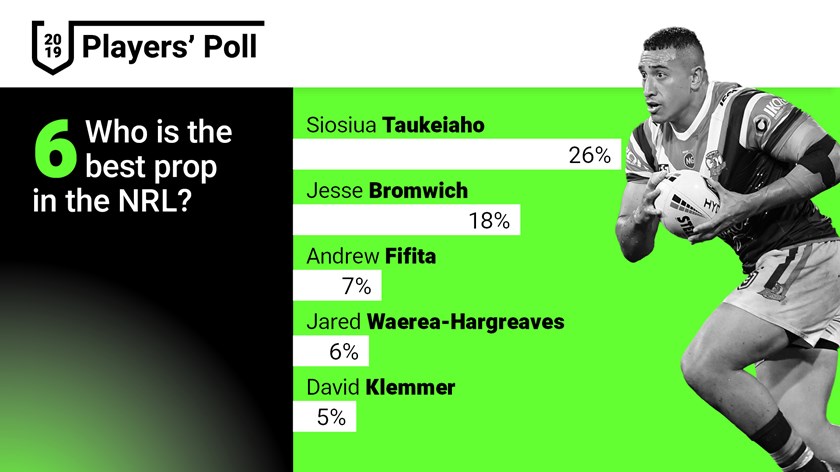 The verdict
Last year we asked for the best middle forward in the game and included props and locks in the same category. This year we’ve changed things up, with Siosiua Taukeiaho taking the cake ahead of Melbourne Storm’s Jesse Bromwich. Three locks won the voting last year, with Reagan Campbell-Gillard earning the most votes of the props. Twelve month on, Campbell-Gillard polled just one vote.
The surprise
David Klemmer has been superb for Newcastle in 2019, however only received five per cent of votes. Manly’s Addin Fonua-Blake didn’t poll in the top five but finished in sixth position after an impressive opening to the year with the Sea Eagles, receiving more votes than his front row partner Marty Taupau. 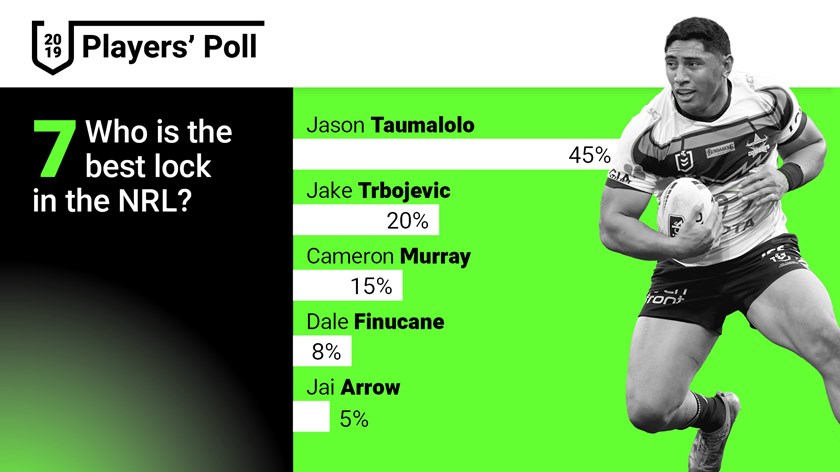 The verdict
Hardly a shock to see Cowboys wrecking-ball Jason Taumalolo top the votes, but the emergence of Cameron Murray has been well and truly highlighted by the numbers. The South Sydney lock finished third with 13 per cent of votes behind Manly’s Jake Trbojevic.
The surprise
Not too many shocks in this category, although Penrith’s James Fisher-Harris and the Roosters’ Victor Radley were on the fringe of the top five with three per cent of the votes respectively.
2018 votes for best middle forward:Jason Taumalolo (34%), Sam Burgess (23%), Jake Trbojevic (10%), Reagan Campbell-Gillard (5%), Jesse Bromwich and Andrew Fifita (4%) 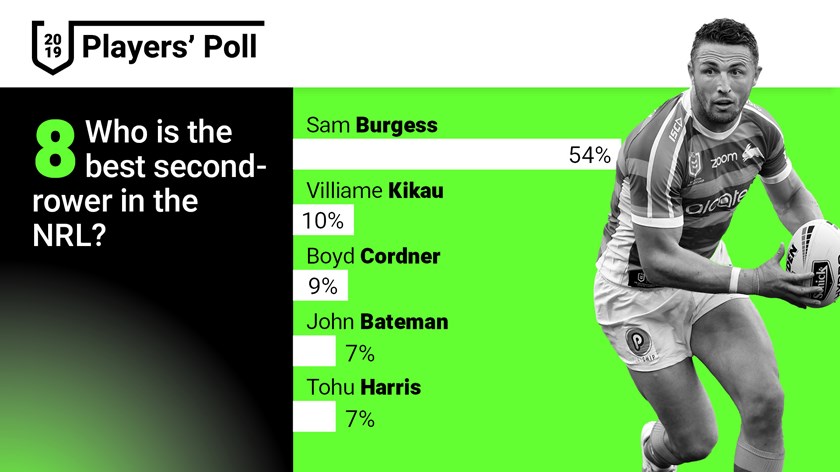 The verdict
Sam Burgess’ shift to the edge has seen him rewarded with top position in the back-rower category. The South Sydney kipper polled more than half the votes. Interestingly Penrith’s Villiame Kikau pipped Australian captain Boyd Cordner for second position. Englishman John Bateman hasn’t taken long to impress in his first season in the NRL, finishing fourth ahead of Tohu Harris.
The surprise
Incredibly there was no room for Dragons, NSW and Australian backrower Tyson Frizell, who last year won this category. Interestingly, there was no love for the man who finished second in 2018, either – with Matt Gillett missing out altogether. Wade Graham would have likely polled higher had he not missed all season through injury.
2018 votes: Tyson Frizell (22%), Matt Gillett (21%), Boyd Cordner (15%), Tohu Harris (13%), Wade Graham (9%) 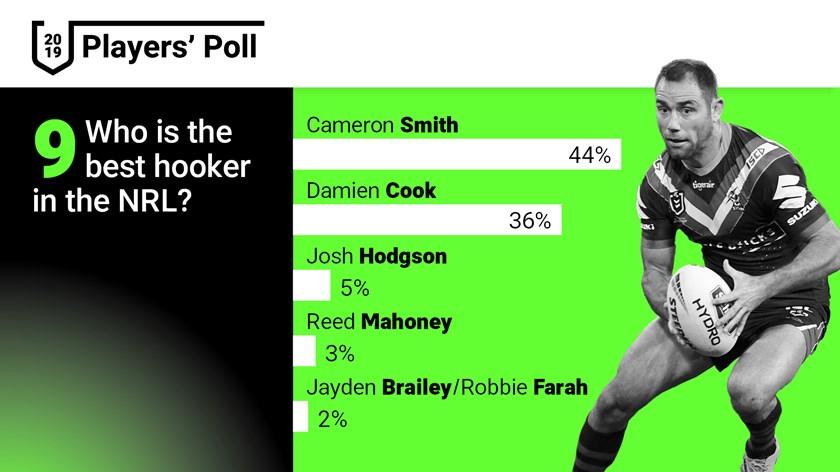 The verdict
Damien Cook has closed the gap on Cameron Smith as the premier hooker in the game, but not enough to dethrone the Melbourne skipper. Last year Smith collected 66 per cent of the votes, dropping to 44 per cent this year. On the other hand Cook has risen from 8 per cent in 2018 to 36 per cent this time around after earning his maiden NSW and Kangaroos jerseys in 2018.
The surprise
Robbie Farah has been in sublime form for the Tigers in 2019. Perhaps the rise of Cook cost him any chance of challenging for the top three positions. 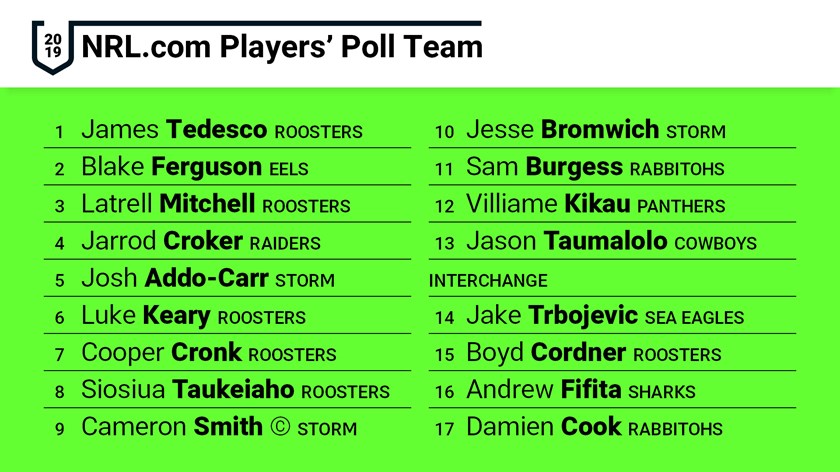 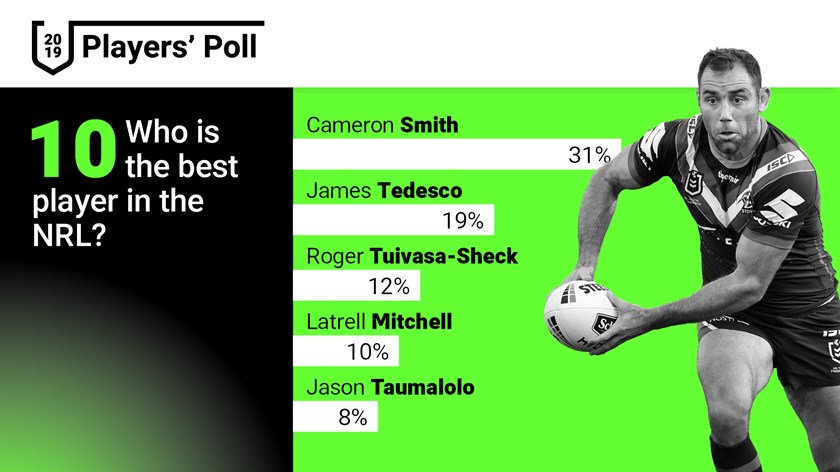 The verdict
Cameron Smith holds on to his mantle as the best player in the NRL, but his dominance has somewhat been watered down. Smith finished ahead of James Tedesco, however the difference was just 12 per cent. Last year Smith had 33 per cent more votes than his nearest competitor, which was Johnathan Thurston. The retirements of Thurston and Billy Slater saw them drop out, while James Maloney was the other player to lose his spot. The trio have been replaced by Tedesco, Roger Tuivasa-Sheck and Latrell Mitchell.
The surprise
No room for Cameron Munster or Sam Burgess in the top five. Also many would have thought Jason Taumalolo would have been higher on the list. 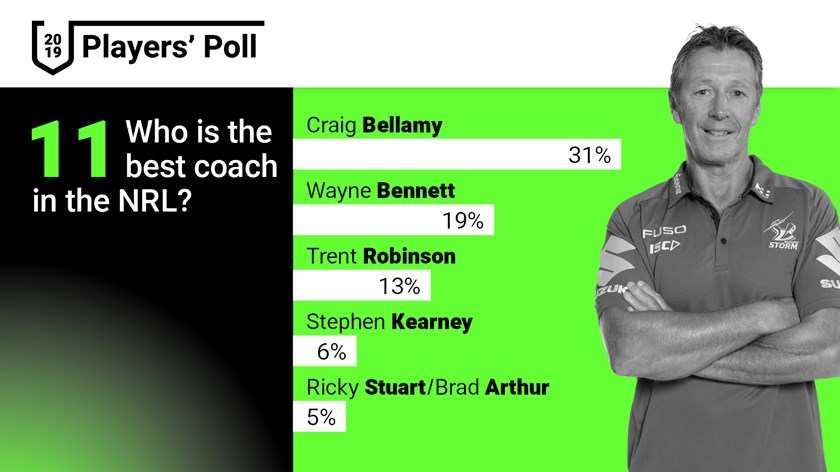 The verdict
Craig Bellamy has retained his spot on the top of the coaches leaderboard, however his lead has been significantly reduced. Wayne Bennett has climbed to second position, increasing his support from 8 per cent in 2018 to 19 per cent this year. There was so much talk about Bennett losing his aura last year, but he has shown with South Sydney that he still has it. Trent Robinson wasn’t in the top five last year, but on the back of a premiership has moved into third. Ivan Cleary has dropped from second position in 2018 to well outside the top five given his struggles in his return to Penrith.
The surprise
Stephen Kearney and Brad Arthur beat the likes of premiership-winners Des Hasler, Paul Green and Michael Maguire.
2018 votes: Craig Bellamy (48%), Ivan Cleary (17%), Wayne Bennett (8%), Paul Green (4%), Stephen Kearney (4%) 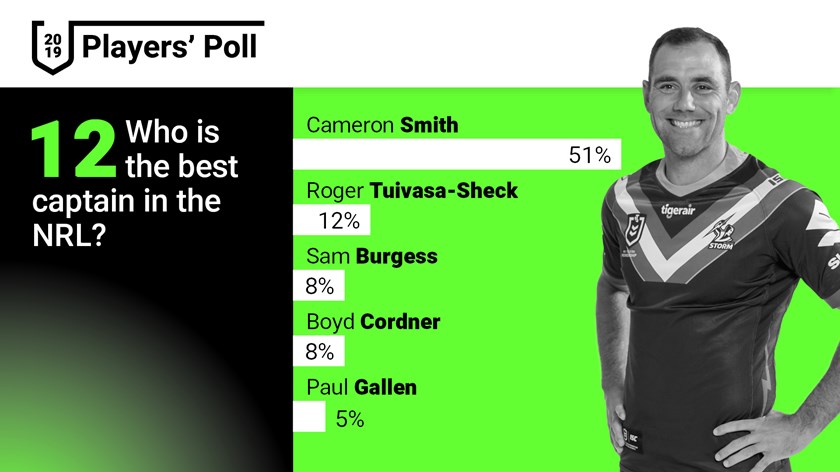 The verdict
As expected, the former Queensland and Australian captain finished with more than half the votes. He pipped Roger Tuivasa-Sheck, Sam Burgess and Boyd Cordner. Retiring veteran Paul Gallen rounds out the top five.
2018 votes: Question not asked. 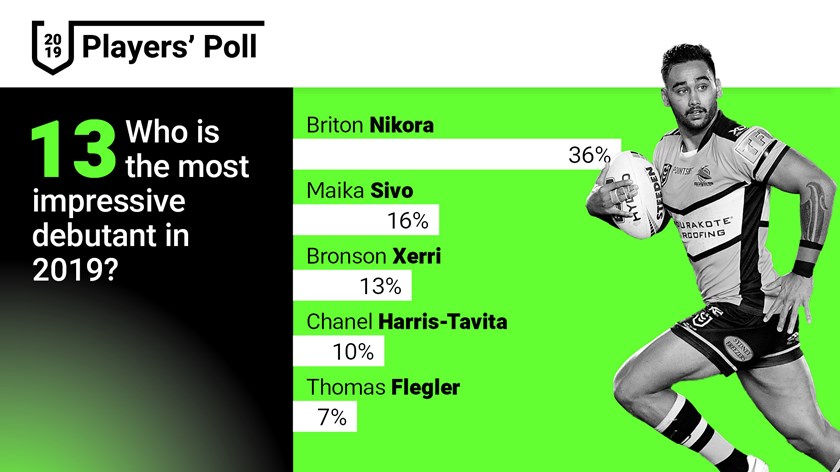 The verdict
Cronulla’s backrower Briton Nikora has caused headaches for rival teams on the edge all season, doing enough to earn the tag as the most impressive debutant in 2019. He earned more than double the votes of any other player. Parramatta’s Fijian flyer, Maika Sivo, edged out Cronulla flyer Bronson Xerri for second spot.
The surprise
Parramatta young gun Dylan Brown showed he is a star of the future in the opening rounds, but it appears injury may have restricted his numbers. Manly’s Reuben Garrick missed out on the top five, finishing in sixth position.
2018 votes: Question not asked.

Apart from your team, which team will win the 2019 premiership?

The verdict
The reigning premiers are the team to beat. Almost half the players tipped the Roosters as the 2019 premiers with South Sydney the next popular team. Melbourne only received 10 per cent of votes, a figure that will no doubt motivate Craig Bellamy and his troops.
2018 votes: Question not asked.

Who should win the Dally M Medal? 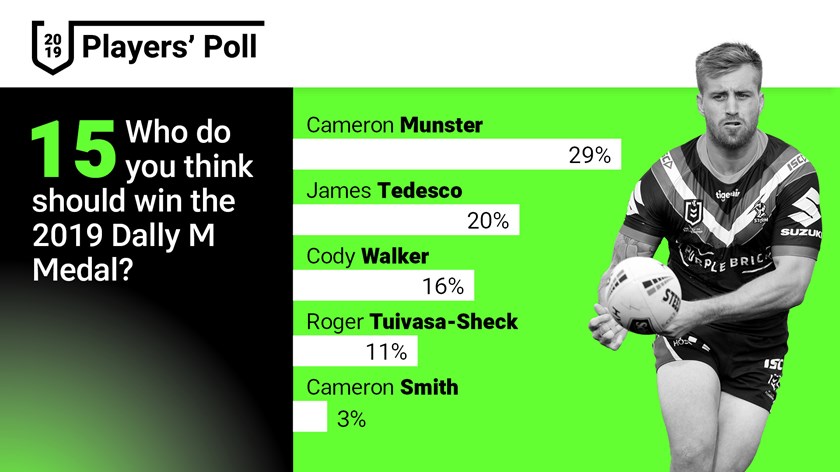 The verdict
Despite missing out on winning the best five-eighth category, Cameron Munster is favoured to take out this year’s Dally M Medal. Munster leads the voting after 10 rounds, however the players still give Roger Tuivasa-Sheck a chance of going back-to-back. Tuivasa-Sheck finished fourth on 11 per cent behind James Tedesco and Cody Walker.
2018 votes: Question not asked.

The NRL.com Players' Poll was undertaken by 154 NRL players across all 16 clubs. The survey questions and results have not been designed or endorsed by the Rugby League Players Association.
Last edited by a moderator: May 25, 2019
Reactions: mt.wellington, Tragic and Rizzah

General The Players poll...whos the hardest in the Warriors..youll be suprised.