​
Promotions?
Demotions?
Any new injury concerns?
Any returning players?
Any tweaks to the bench?

Roger has to go back to 1
Reactions: zaggo, warriorsfan92, BA-AD Luck and 1 other person

Roger back to FB and Walsh into the Halves. Not sure about Berry in the centres but not a lot of options.
Reactions: zaggo, Billyspleen75, warriorsfan92 and 1 other person

Brown said a couple coming back, guessing he meant Fusitua and Harris. Hopefully Aitken and Pomps back following week would be nice.

Is there really no way to play Maumalo in any position other than Wing???

If not, then drop him into reserve grade and teach him how to play Prop. He reminds me of Kane Evans...
Reactions: PullinTeeth, the borg, Rick O'Shay and 1 other person

Wow Fusitua is coming straight back into the starting line up?

xWarrior said:
Wow Fusitua is coming straight back into the starting line up?
Click to expand...

Under the circumstances, yes. Kosi would only mean another rookie in the backline. Who else? Keep Sironen, Murchie in the pack.

I see Brown is going to keep Walsh at fullback

BA-AD Luck said:
Under the circumstances, yes. Kosi would only mean another rookie in the backline. Who else? Keep Sironen, Murchie in the pack.
Click to expand...

Ken and Montoya on the wings. Berry and Murchie centers. I feel like Fusitua needs to earn his way back in so he can give a shit when he plays.
Reactions: BA-AD Luck and PNG Kiwi

I wonder if we might see Otukolo debut, Egan needs some help.

Roger Tuivasa-Sheck back to 1 and Walsh to 6, Kodi have a break and bring back Sean O'Sullivan.
Toggle signature
This is an opinion. Please treat it as such.
Reactions: Rizzah, CHURCUZ, wizards rage and 6 others

Don't want to see an unmotivated fusitua, could look to play Sean O'Sullivan alongside Walsh and put Kodi on bench (replace Sironen)
Assuming Harris is only returnee
Reactions: Rick O'Shay, RiceOwl and Sup42

Rick O'Shay said:
I wonder if we might see Otukolo debut, Egan needs some help.
Click to expand...

He got hooked for Tevaga at the back end of the last game. Wouldn't surprise me if Brown is re-evaluating him being an 80 minute hooker.
Reactions: wizards rage, zaggo, Dave Brough and 6 others

WellingtonOrca said:
He got hooked for Tevaga at the back end of the last game. Wouldn't surprise me if Brown is re-evaluating him being an 80 minute hooker.
Click to expand...

Liability on defence and limited impact on attack other than passing the ball.

Cheese and Harry Grant, they both reminded me of a 2018 Issac Luke. Impactful ball running and ball tackling players. Throws their body around without a care in the world. Their stocky build helps.

We need an upgrade on Egan. Hooker is too important a position for just average.
Reactions: Swanley, Boats n Hoes, jsmooove and 4 others

I've tried picking a team but have chopped and changed it to the point that I can't decide. More questions than answers at the moment.

I reckon a halves pairing of Walsh/Harris-Tavita with some snipes from dummy half by Nikorima from the bench could be pretty lethal, however that option is still several weeks away.

If we continue to play Egan for the full 80 we are going to break him. He clearly has injury niggles that he's carried into the season and its unrealistic to expect him to last the year with the workload which is beyond him at the moment. I'm guessing Turner was the original bench replacement option until he was forced to play centre twice. Probably time to give the spot to Otukolo, though with Harris back it would probably mean Jazz drops back to the bench and I like the impact Afoa, Ah Mau and Murdoch-Masila are giving us.
Reactions: CHURCUZ and BA-AD Luck

I would love to see this.

- Evans was weak in attack
- Sean O'Sullivan has been solid and is our main kicker
- Ben Murdoch-Masila & afoa need to start, aggressive & fast start
- sironen a classy player, more mobile than murchie & has a catch pass for space
- Walsh to come into halves, spell Egan at 30 min, push kodi to 9.
- Montoya has been good, but Fusitua imo is a better winger. He was better two weeks ago but still needs to improve. If he’s fit, he’s a starting winger. Unless they want to play Montoya at centre and drop either sironen or murchie but I think having those options on the bench is good for outside and edge cover

Biggest changes:
Roge to fb
Walsh to bench, comes on, spells Egan & moves kodi to 9
Tohu Harris back to 13
Tevaga to bench for leg speed at ruck after 30
Ben Murdoch-Masila to prop, to start. Afoa to start.
Reactions: dantheman and jonesy101

Can we just have this please 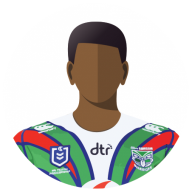 Keep Roger Tuivasa-Sheck at fullback, defend Reece on Montoya’s wing and bring Montoya to defend in centres as he does a decent defensive job there. On attack push Reece into half’s and Montoya onto the wing.
Reactions: fizurg, Stalefish540, warriorsfan92 and 1 other person

Lance155 said:
Can we just have this please

Katoa for Leeson Ah-Mau once he gains back 20kg.

Pompey to wing. Ken into retirement