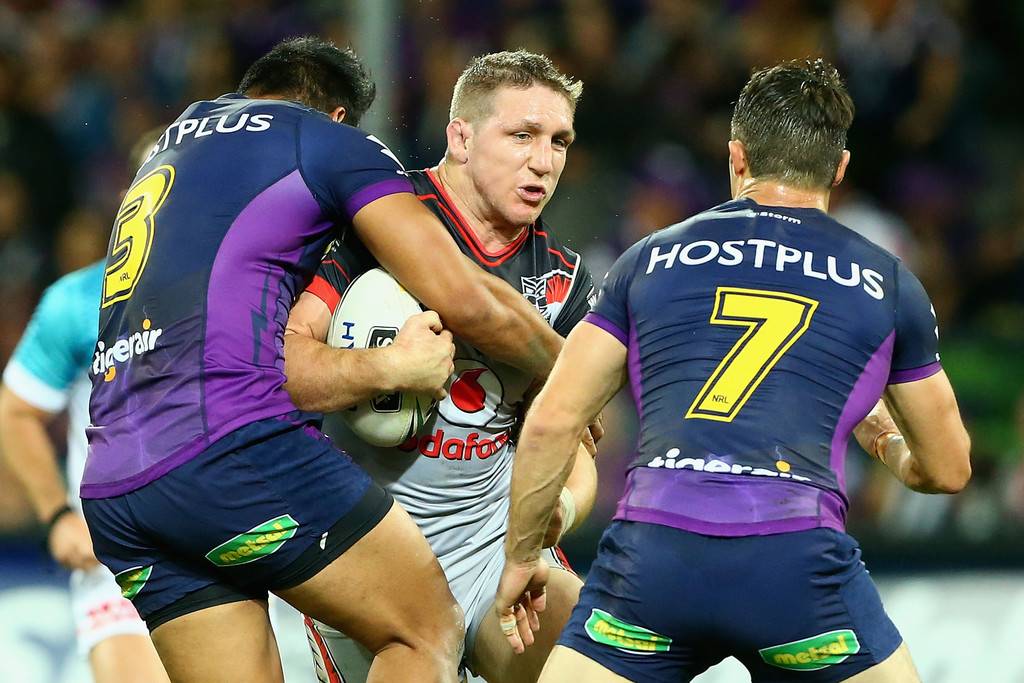 Bear in mind this game is on a Tuesday night.

Assuming mutts is still out and Bodene suspended

I like it except for Kata ..... Fusitua to centre TUI to wing
Reactions: BlaqAdam, zegy and Waiting For Premiership

no fucking way Tui deserves to be back in first grade.
Reactions: frankspence, wazzas, Ozwarrior and 24 others

I like Maumalo tho. He'll make a great edge forward one day if he's lucky...
Reactions: bruce and Hadyn

Is Fusitua a centre? he was invisible today. Would he be more valuable on the wing? hes good under the high ball, a good finisher, and hes big unit to carry the ball back. Maybe the Warriors should look at a mid season purchase of a centre
Reactions: eric, bruce and jonno

Maumalo is not a long term wing prospect. We need to look to the future and blood a traditional winger, who actually scores tries and doesn't make many mistakes - when was the last time we had one of them? Laumape probably....

We have to sort out our bench. Sao has to go, he is not an NRL quality forward. Roache provided no impact. Afoa has to come back, Hingano as an impact player on the bench.
Reactions: Matulino's Left Shoulder

Wish we still had wells,.the dude had wheels.that qualifying final he out ran everyone.just beat people with speed but apparently he wasn't big enough.fuck off you dicks.would of put him ahead of Manu,and ken.
Last edited: Apr 15, 2017
Reactions: Jay M, Off The Bench and Inruin

Contributor
Ben Matulino in for Ligi Sao is the only change I can see happening...
Reactions: Warrior482, Ozwarrior, Leaguegod and 3 others

Bunty in for bodene if suspension
Mutz for ligi or gub.

Ken & sol need to work on there d

What a dilemma we've found ourselves in.

We've recruited/retained an under strength and under sized forward pack that struggles to assert its dominance over other teams.

As a result we're relying on our outside backs to help set our forward platform rather than adding punch when needed.

So instead of targeting tired forwards with pace and footwork and creating line breaks and second phase, what they're doing is taking one-out hit ups early on in our sets like a bunch of battering rams...

And because of the frequency at which they're doing this, they're getting more fatigued than they usually would which is causing various lapses in concentration and repeated errors.

In turn, these repeated errors are forcing more pressure onto our already struggling forward pack and so repeats the circle of life.

This is the reason Maumalo's job is safe. This is the reason Charnze Nicoll-Klokstad can't get a look in. The sooner our forward pack starts dominating other teams the sooner we can get in some speed and finesse on the edges and start looking like a real footy team again.

Therefore, I'd like to see the following changes:
- Matulino in (if fit) for Sao
- Vete in for Gubb
- Bunty in for Thompson (if suspended)
- Possibly a reserve forward like Satai or a Sipley for a short 15min stint
- 4 prop bench with regular rotations to keep the intensity high

If we can start to gain some consistent forward dominance or even parity (over a 2-3 week period) I'd then look at bringing in some speed with the likes of Charnze Nicoll-Klokstad (for Maumalo) and Roach (bench).

Just to make my point clear, I think wingers and outside backs should only be used as battering rams in tough times when you're in a real grind and your forwards are out on their heels, as can be seen with Manu in the Kiwis or in State of Origin games. I don't think that should be our default setting to be used for 80min week in and week out all season. It takes far too much out of our backline and dulls our strike weapons.
Last edited: Apr 16, 2017
Reactions: Billyspleen75, gREVUS, Beastmode and 13 others

Our fowards were a lil under sized today but i seriously thought they played well. However, i was not impressed with the backs AT ALL lol. i felt Foran was completely absent throughout that second half, Kata and Maumalos defense was EMBARRASSING. Pressure got to Roger Tuivasa-Sheck as he was forced to take the ball on a lil more. Shuans defence here and there was below average. i just feel like our backs could not hold on to the ball at all. few unfortunate errors from Mannering and Thompson didnt help either. Our entire team found it hard to contain the offloads too, no one taking ball on tackles up top... I say we use new centers and look at bringing someone like Charnze in... Roach should not have of come on and we look at putting Bunty in for either Sao or at 18th man. We got enough punch, i just reckon we need to hold on to the dam ball !! lol. .....

No injuries no meaningful changes I can see. The ruck the ruck the ruck, tighten it up or Smithers will own the game. 80 minutes Warriors - smash the storm
Reactions: BlaqAdam, Sup42, AlexM and 2 others

I cringed at this comment. Like inruin said Tui doesn't deserve it.
Reactions: wazzas, FAN and Inruin

If I try to be completely objective and remove all emotion from my critique, I would have to say that it wasn't a bad performance, as we did come up against one of the top teams in red hot form and only got beat by 12. There were some areas of improvement required, but nothing I felt that was dramatically bad, so all and all I would give it a pass mark and still good signs for the rest of the season.

Could you imagine if the Raiders continue to play like they do, then they will be the minor premiers, with a for and against better than any has ever been in the NRL

Whoops this was supposed to go in the other thread, sorry
Reactions: leaguejunkie, Sup42 and mt.wellington

Like your team.
If SK picked on form , i think that would be the team with the exception of Kata on the bench.