WARRIORS HAVE A BYE NEXT WEEK 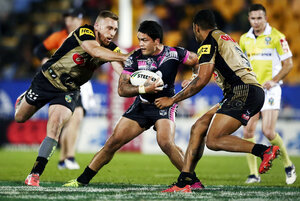 Depends on injury really.
Hopefully Luke's back.... lisone comes back for vete. Afoa on that edge is a worry- be tempted to move manners there. On the other hand he's so fucking awesome doing his thing in the middle.
Thought ashford went missing and why the fuck didn't he tackle uate just before halftime? He just needed to dive but instead ran the other way- it was weird. Prob hold his spot but has left the door a jar for kata to come back into the mix.

Reckon Roache was just a cramp. He was keen to play on and we let him run off like that. If not, we're idiots

You related to Sao lol? That dude is average...
Reactions: The Cheap Seats, StephenDedalus, Tylz and 1 other person

I'm surprised anyone would consider dropping CNK, he's proven he is a bonafide 1st grade wing. He can attack and finish, and he is safe in the air on defence.

He should be playing for the rest of the year based on performance, let alone to get him experience for next year.
Reactions: The Cheap Seats, Off The Bench, Ozwarrior and 4 others

1. RTS -nice to see the skip scoring tries and setting some up, he's fulfilling all of my expectations and more
2. Fus - been playing really well ol fus, hasn't had much ball to work with being down the left side but he's doing a lot of yardage work which is good to see
3. Aysh - love this guys' work, makes 20-25 tackles per game which most people don't notice and offers a threat outside thompson as well
4. Kata - really missed this guy these last few weeks, running game would have been perfect against manly when the defense started to break open
5. Maumalo - really starting to come into his own, has always had the good work ethic and is now starting to develop some x-factor with his footwork
6. Foran - been real solid, those trick plays with the spine are starting to come off really nicely
7. Johnson - coming off his best performance in a long time, against a really tough team too. hopefully can keep it up
8. Lillyman - really solid and does his job. doesn't offer much of a threat to the d-line though so his games in fg are limited
9. Tevaga - need a real tough nut to start off. just needs to do his thing and get out of dummy half, try to give solid service to the halves
10. Matulino - starting to get back to his best, made it his mission to muscle up in the first 20 against manly and outshone the in-form taupau
11. Thompson - back to his best, good to see him repay the faith kearney showed
12. Afoa - stuggled for a few key moments against manly but still the next best backrower we have, just gonna have to learn on the run
13. Mannering - simon supermannering the beast king congueror

14. Cherrington - tevaga could probs smash out 80min in the middle but i rekon his passing game would probs fall away, so cherrington to share the role
15. Gavet - dudes having an awesome season, providing great impact off the bench
16. Lisone - need this guy back, bench impact and passing game make him lethal
17. P. Sipley - bring him in, chuck him on, line 'em up, knock 'em down
Reactions: hman, Centurion, warriors4sure and 2 others

I'm sorry but those picking tevaga over cherrington are dead shits
Reactions: shuffle and (deleted member)

mt.wellington said:
WARRIORS HAVE A BYE NEXT WEEK


WARRIORS HAVE A BYE NEXT WEEK​
Click to expand...

yes afoa needs to be dropped manu bak in and maumalo in centres
Reactions: Swanley, Inruin and Nenz

afoa nees to be dropped bing manu back on to wing and maumalo in to centre ayshford to bench
Reactions: Swanley, Inruin and (deleted member)

your a deadshit, cause cherrington lost the ISP game yesterday by dropping the ball cold with 1 minute to go, all he had to do was hold the ball and make simple passes out of dummy half. lost the whole game for them.
Reactions: The Cheap Seats, mt.wellington, Stalefish540 and 2 others

sweetkiwi71 said:
your a deadshit, cause cherrington lost the ISP game yesterday by dropping the ball cold with 1 minute to go, all he had to do was hold the ball and make simple passes out of dummy half. lost the whole game for them.
Click to expand...

Reactions: The Cheap Seats, Off The Bench, Stalefish540 and 1 other person

And does this mean being called a live shit is a complement?
Reactions: Swanley, Khaboom, OMG and 5 others

sweetkiwi71 said:
your a deadshit, cause cherrington lost the ISP game yesterday by dropping the ball cold with 1 minute to go, all he had to do was hold the ball and make simple passes out of dummy half. lost the whole game for them.
Click to expand...

If Manly worked the ruck with Roache in there, then Penrith will obliterate our ruck with cherrington there. Cherrington/Jazz it's a pretty lose lose situation.

Hows bout we discuss this shiz instead of throwing insulting remarks at each other?

I personally see Cherrington as the better dummy half. However, since he's only just joined the club I doubt he's had enough time to settle in and get used to his new systems/ surroundings/ teammates etc.

Regardless, I can't see either him or Tevaga putting in a solid 80min performance in first grade at this point in their careers. Therefore we'd need to go with both.

I picked Jazz to start because he's a strong defender and will most likely handle the opening 20min better than Cherrington.

If you guys think you have a better answer, sweet. Let's hear it.
Reactions: Off The Bench, Centurion, leaguejunkie and 1 other person
Show hidden low quality content