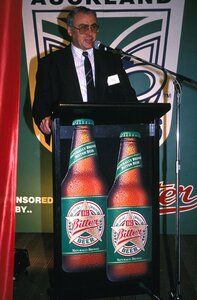 ​
Just wanted to offer the McLeod family my deepest condolences for the passing of Peter McLeod.

A lot of fans have never heard his name before but if it werent for this mans huge effort we wouldnt have a club representing NZ in the NRL. Simple as that.

While it was members of the Mt Albert Rugby League clubs Board, which included John Ackland, that first wrote a letter to the New South Wales Rugby League Chairman it was Peter McLeod who was tasked by Auckland Rugby League with providing feasibility reports. getting sponsors, players, a coach, CEO, etc.

It was his efforts that saw us admitted into the comp in 1993 ahead of Austraian teams the North Queensland Cowboys, Western Reds and South Queensland Crushers. So prepared and thorough was McLeod's presentation that we were actually meant to start playing in 1994 but the other bidders werent ready.

This man truly was our founding father and deserves to be remembered as such. Hope the club made amends with him when down in Rotorua for the trial game and hopefully they do something special to remember him...
Reactions: Gee, Johnnyray, Ozwarrior and 19 others

Damn your a good egg Mt Well. Its great to know that while the rest of us rest on our... Laurels, that you keep track of all those that matter to the sport we love.

Condolences to the Mcleod Family. While i am sure you miss him more than we ever could, it is worth stating that he oversaw the creation of something that is loved by many, including myself. The living results of his efforts will be cherished by many, many proud Kiwis for years to come.
Reactions: Johnnyray, frankspence, mt.wellington and 1 other person

Gee just thought I'd check to see if there were any new threads started up. Didn't want to see a R.I.P thread.

I recall seeing Peter Mcleod at the old under age tournaments they used to have at Hopuhopu and telling my father he was the most important guy here as he was the top guy at the Warriors.

I never knew our presentation to the old NSWRL was so thorough we could have been ready a year earlier. Amazing to hear how organised things were at the start when you think about the rabble the club has been at various stages.
Reactions: mt.wellington and Akkerz

snake77 said:
Amazing to hear how organised things were at the start when you think about the rabble the club has been at various stages.
Click to expand...

One man could only do so much, he was surrounded by some less than smart people on the Warriors board and he also had to go through the Super League war at the start of 1995. A sad loss.
Toggle signature
Trainspotter

RIP Father McLeod. Thanks again for everything you've done. The Warriors family won't be the same without you ...
Show hidden low quality content

General Where are they now? - Warriors Edition