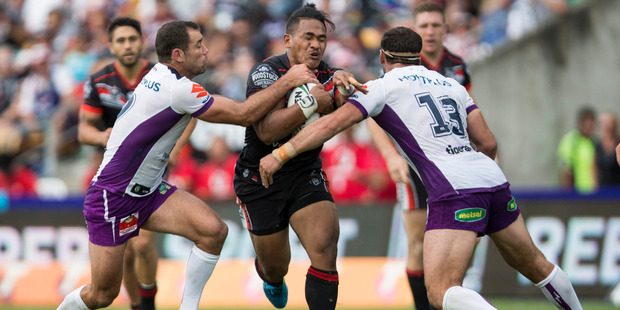 Solomone Kata of the Warriors looks to punch a hole in Melbourne's defence. Photo / Jason Oxenham

The Warriors have announced the introduction of Pasifika Youth Cup, adding a vital layer to the club's development programme.

The tournament (for under-16 and under-18 teams) will be played in Auckland from January 25-28 featuring New Zealand Maori, RL Samoa, Tonga (Hakula Tonga), Fiji NZ, Cook Islands and Auckland Niue Rugby League.

It is being hosted by the New Zealand Maori Rugby League in association with the Warriors, with the participating teams forming a competition panel.

"If young players are serious about their goals then they need to think about off-season training and we hope the introduction of the Pasifika Youth Cup provides a carrot for them to push hard during the preseason," he said.

"It offers our development players with meaningful football and the chance to push their claims for our NYC squad.

"We're excited to work with the organisations involved and see this as becoming an important fixture in the rugby league calendar."

Iro encouraged talented elite junior players to contact the teams they might be eligible to play for.

"This is a really exciting concept and the players will be proud to represent their nations," he added. "It not only offers further footballing opportunities but, just as importantly, it also gives players involved the chance to learn about their respective cultures."

.... while it is nice for NZ very small rugby league communities of Niueans & Fijians to have a comp to play in. The Warriors have never had shortage of Pacific Island Players on there roster recruited from traditional pathways of club, school, representative rugby league what exactly is the point of this comp? Can a team be added for players from cultures not represented?
Last edited by a moderator: Dec 11, 2016
Reactions: 1 users

kiwi's 13-6 said:
.... while it is nice for NZ very small rugby league communities of Niueans & Fijians to have a comp to play in. The Warriors have never had shortage of Pacific Island Players on there roster recruited from traditional pathways of club, school, representative rugby league what exactly is the point of this comp? Can a team be added for players from cultures not represented?
Click to expand...

Wondered about that myself. Will they include a palangi team? Why limit the focus to only Pacific countries?

I assume they have done the maths and identified the Pacific players as most likely to play the game but it would be better to play a comp elsewhere like the South Island to get those hardened West Coasters or rangy farmhands cause as you say the Pacific pathways, especially in Auckland, are already very well developed.

Better off trying to make inroads into more traditional rugby union areas like Canterbury. Well the whole South Island really bar the West Coast. What about Central and Lower North Island? Gems like Ngani Laumape, Nelson Asofa-Solomona, Tohu Harris were plucked from that area and judging by the insane level of depth that the NZR machine enjoy from the All Blacks to the ITM Cup theres no shortage of talent from outside of leagues stronghold of Auckland.

Awesome to see the Warriors doing something to promote youth footy but a little outside the box thinking would have been better...

This comp seems like a strange use of money by the Warriors? They are probably are looking at it as giving back to Polynesian community. Polynesian community has always been well catered & represented by the Warriors through out there 21 year history. What about a team or teams for palangi's/pakeha, asian, middle eastern, african & pacific islands not represented or mixtures of any and all of the above... It isnt 1980's anymore there are many ethnic cultures in NZ & people of mixtures of all of these cultures born and raised in NZ.
Last edited by a moderator: Dec 15, 2016

Hey Warriors.
A bit off topic , but involves maori youth.
We are bringing league out of my daughter school this year.
We are a low decile two evaluated school.
Resources will come out off my club for training etc.
We have no kit and the school cannot help until B.O.T plans have been completed.
I know about all the apparel and uniform makers.
Just wondering if any Warriors know of someone different or if there is a 2nds place etc.
Appreciate it.
Reactions: 1 user

Weno I think this Pasifka comp is run by NZ Warriors so if you want to enter a side maybe email them if you just want to enter a school side in a school comp maybe contact local school sport organisation, whatever the case good to see your starting up a side
Reactions: 1 user

Weno said:
I know about all the apparel and uniform makers.
Click to expand...

You looking for a uniform maker???

mt.wellington said:
You looking for a uniform maker???
Click to expand...

Yes please Mt Wellington.
I know there are a lot more than what google is giving me.

Weno said:
Yes please Mt Wellington.
I know there are a lot more than what google is giving me.
Click to expand...

Try Aliexpress.com or anywhere in China. Cheap as hell and does the job...

Contributor
Would have though Pasifika players are already pretty successful at transitioning to NRL as it currently stands? Also seems unusual to limit the scope to only part of the population.
Would the money have been better spent trying to unearth talent outside of the current stronghold?
Show hidden low quality content
Share:
Share