Cameron Smith has been voted the best of the best in the NRL.com Players’ Poll, collecting almost half the votes in the best player category.

The Melbourne Storm captain is one of the oldest players in the competition but it hasn’t diminished his stance in the game as he collected 45 per cent of votes from 117 players across all 16 clubs.

The poll, which was conducted before this year’s representative matches, has also highlighted how significant reputation is in determining who the players regard as the best in the business.

Retiring Cowboys legend Johnathan Thurston, who many believe will one day join Smith as an Immortal, finished second ahead of North Queensland teammate Jason Taumalolo.

Interestingly four of the top five players are all over 30, with Billy Slater and James Maloney rounding out the top five.

The Melbourne Storm's dominance hasn't stopped at Smith, with Will Chambers and Josh Addo-Carr picking up the best centre and winger in the game. The poll was conducted before Latrell Mitchell's eye-opening performances in Origin.

The best edge forward in the game was the closest of all the positional categories, with St George Illawarra's Tyson Frizell edging out injured Broncos forward Matt Gillett.

Taumalolo, who finished third in the 'best player' category, pipped Sam Burgess and Jake Trbojevic as the best middle forward in the game. 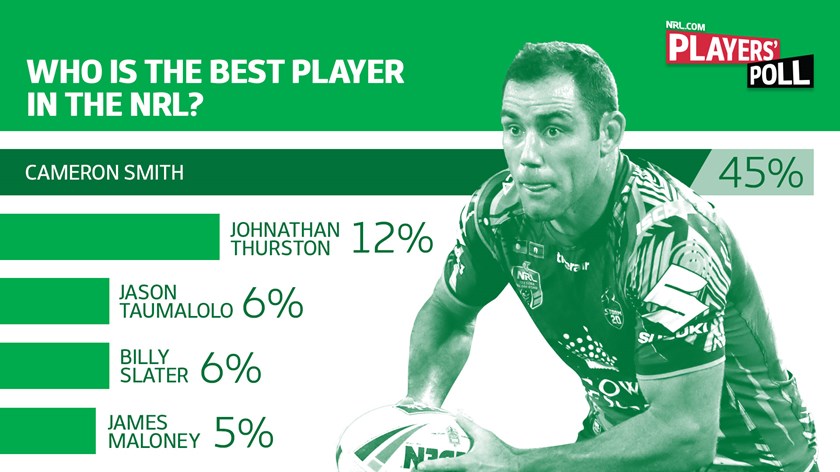 The verdict: If Cameron Smith needed any assurance he should continue to play on beyond the end of this season, this is it. He is considered the best player in the game by his peers by a long shot. It seems players haven’t forgotten reputation when casting their votes, with Johnathan Thurston coming in at second position.

The surprise: Perhaps the fact Greg Inglis missed out on the top five would surprise many. Also the fact Cooper Cronk wasn’t in the top 10. 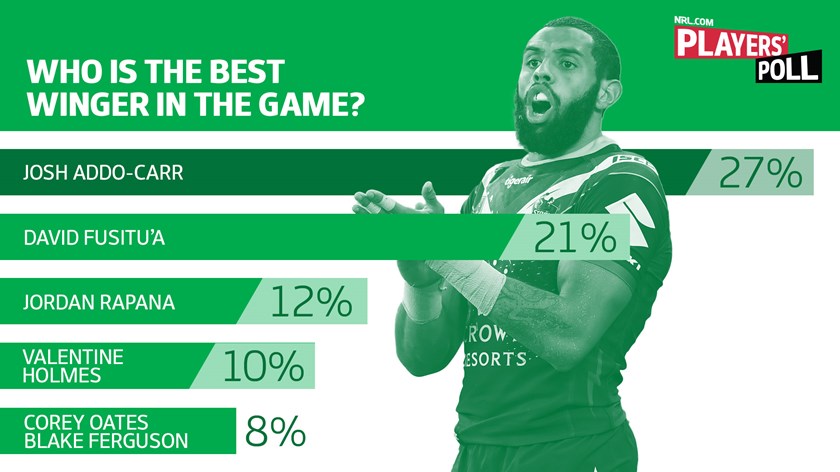 The verdict: The Foxx’s incredible transformation since joining the Melbourne Storm continues to improve, regarded by the players as the best winger in the business.

The surprise: Warriors winger David Fusitua is highly regarded, but not many would have predicted this highly. Last year Suliasi Vunivalu was arguably the form winger in the NRL but there was no room for him in the top five. 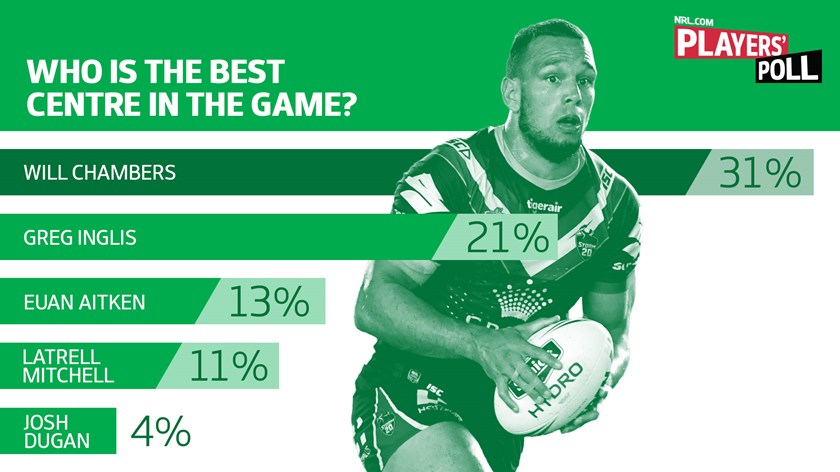 The verdict: Will Chambers has edged out Greg Inglis as the best centre in the game. Chambers has been regarded as the best in his position for a few years but there are a few young stars gunning for his mantle.

The surprise: The poll was done before the start of the Origin series. Perhaps Latrell Mitchell would poll a lot higher now than he did before the series. Euan Aitken was also in contention for Origin and was in red-hot form to start the year. 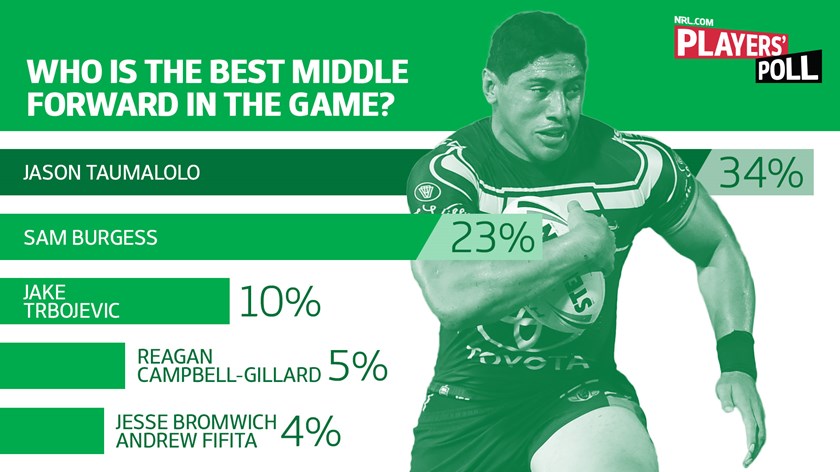 The verdict: This was always going to be a two-way battle between Sam Burgess and Jason Taumalolo, but it probably comes as no surprise to most that Taumalolo is considered the best of all the props and locks in the game. Jake Trbojevic’s non-stop efforts in a struggling Manly side haven’t gone unnoticed.

The surprise: Andrew Fifita only collected four per cent of votes. That’s a lot less than many would have anticipated. There was also no room for Kangaroos prop incumbents David Klemmer and Aaron Woods in the top six. 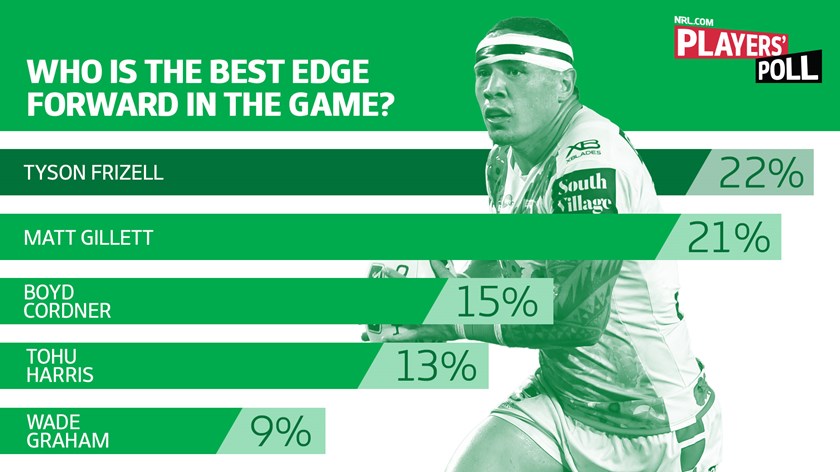 The verdict: This was the tightest battle of all positions. Dragons back-rower Tyson Frizell edged out Matt Gillett, and perhaps it was a matter of out of sight out of mind for the injured Broncos second rower.

The surprise: Boyd Cordner only received 15 per cent of votes, while Angus Crichton struggled to poll enough votes to finish in the top 10. 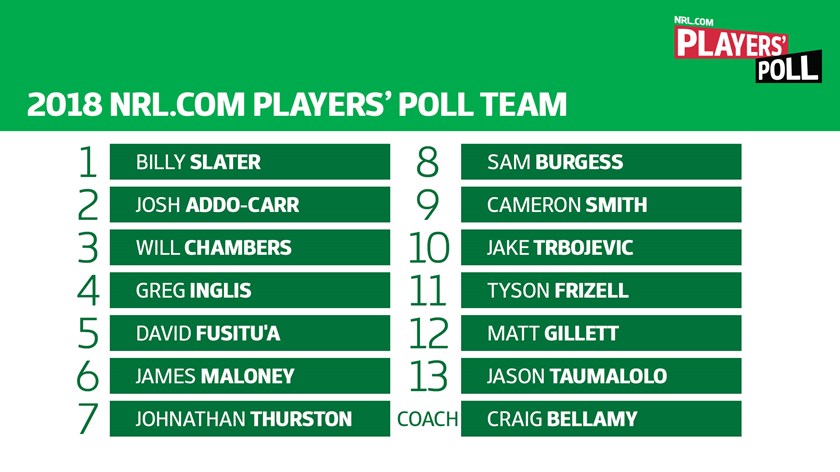 Part one of the poll was published on Thursday featuring the rest of the player positions, part three on on-field issues will be announced on Saturday morning with the final instalment going live on Sunday morning on other key topics in the game.


The NRL.com Players' Poll is independent of the National Rugby League. The survey was undertaken by 117 NRL players across all 16 clubs. The survey questions and results have not been designed or endorsed by the NRL or the Rugby League Players Association (RLPA).

The wing polling was pretty close. Surprised Rapana didn't get a few more votes. Good to see Fusitu'a being recognised by his peers. Great under the high ball and getting the difficult put down. He could also be a chance for a Dally M.
Reactions: razzrillinger, Centurion and Defence

So the only two spots where we didn't get a mention is middle forwards and centers- no surprise there.
Reactions: mt.wellington
Show hidden low quality content