Motota said:
Kenty going in on the panthers on 360 tonight 😅 to be fair the footage they showed of them carrying on was a bit much
Click to expand...

It is a GF, and they are Ozzies. You should read Mathew Ridges book about their WEEK after the GF win. The club needs to get them away from sensitive areas though.
Reactions: Motota

Motota said:
Was a selfie of him and salmon, the caption was "My n****" pretty silly coming from a professional athlete
Click to expand...

Been watching to much of Denzel in Training day....
Reactions: Motota, Beastmode, bruce and 2 others

Hopefully this isn't related to Curran

Pretty sure it is, not looking good for Curran even if he was provoked.
Reactions: Motota, john nick, bruce and 1 other person

Motota said:
Was a selfie of him and salmon, the caption was "My n****" pretty silly coming from a professional athlete
Click to expand...

Isn’t there a different context if the word ends in “a” rather then “r”?

Music, movies and pretty much everywhere you will see that word being used as a form of empowerment … no wonder kids are so confused…
Reactions: Motota and Tragic

Thirdly why do the parents of a 16 year old l

WTF are the parents doing with their 16yr kid in a nightclub at 3am.
Reactions: Rick O'Shay and bruce 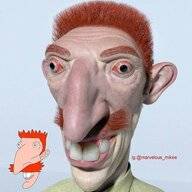 Beastmode said:
Isn’t there a different context if the word ends in “a” rather then “r”?

Music, movies and pretty much everywhere you will see that word being used as a form of empowerment … no wonder kids are so confused…
Click to expand...

Personally I think the word has transcended its original meaning in that context but i can't really comment on whether it offends people or not as I don't have the status to.

Looks like it is this incident...however there is no information available that Curran was the protagonist. He simply couldve been part of a group involved, or even been trying to break up a fight. Pretty sure they report anything like that to the NRL.
Reactions: bruce, Mr Brownstone, Big_Fattz and 1 other person

Curtis Scott has been found guilty. Good, rot in prison you prick.
Reactions: Worried2Death, Blackdot, Defence and 1 other person

What a toxic relationship.

From what i just read, she was an Instagram influencer, posting bikini photos of herself and getting messages and photos from guys.

Bad choice in GF’s and now he’s got to pay the pipe piper.
Reactions: dean

He’s got form- should’ve been locked up a couple of years ago.
Reactions: Mr Brownstone

Anybody know which NRL star this story is about?

She found videos of her husband and his new partner on their shared cloud account.​

The international player made a complaint to police two months ago after his former partner threatened to release the footage she discovered on their shared cloud account, with the player reportedly saving several explicit photographs and images with his new partner on the account.

Police are alleging that a friend of the ex-partner's young child was playing on an iPad when the material was discovered and brought to attention, which saw the woman ring her ex-husband enraged, to tell him how gross the material was, especially on an iPad shared with children.

The player then lodged a formal complaint with the police, who allege that the woman threatened to distribute the material during the phone call.

The police raided the woman's house on October 21st, discovering that she had recorded several images and videos of the player engaged in sexual acts, as well as forwarding part of a video to a third party.

The woman is set to fight the charges in court, claiming the third party she sent the footage to was the parent of the child that discovered it initially on the iPad.

The woman's lawyer is putting in pleas of not-guilty to both charges, which each carry a maximum three-year jail sentence and an $11,000 fine.

New laws state that courts can take significant bounds to “recover, delete or destroy images taken or distributed without consent", and a failure to do so can add an extra two years and $5,500 to the penalty.

The issue is still ongoing within courts.
Reactions: J_P, wizards rage, matiunz and 4 others

Contributor
The NRL is taking the piss now. 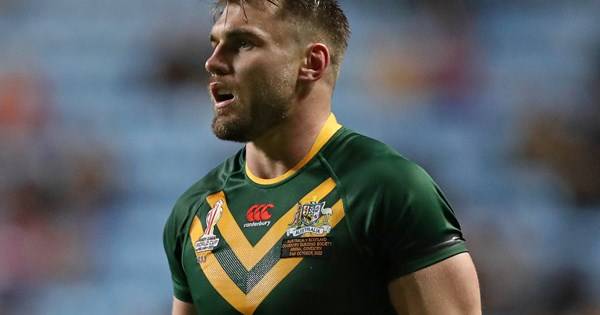 If we get a ban can we just line up some warm up games mid-season for our player to play to serve the ban now? Bang out some quick warm up runs in a week and boom no official games missed.
Reactions: Rizzah, Warriorshopeful, bruce and 6 others

drunk_monk said:
The NRL is taking the piss now.

If we get a ban can we just line up some warm up games mid-season for our player to play to serve the ban now? Bang out some quick warm up runs in a week and boom no official games missed.
Click to expand... 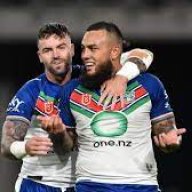 At times it seems like the NRL wants to run an entertainment business instead of an actual sports code.
Reactions: AlexM, Worried2Death, Warriorshopeful and 8 others

Christchurch_Warrior said:
At times it seems like the NRL wants to run an entertainment business instead of an actual sports code.
Click to expand...

They might get wise to the fact if you fix the results like pro wrestling it might increase business. Close games won at the buzzer, fairy tale endings for the winning team with the competition won by the underdog. But then the Roosters come out and steal their best players cause everyone has a price for the Million Dollar Man (Politis).
Reactions: Inruin, wizards rage, crump81 and 2 others

Christchurch_Warrior said:
At times it seems like the NRL wants to run an entertainment business instead of an actual sports code.
Click to expand...

Ok...ban me...but who owns the outfit?
Reactions: Inruin, crump81, Akkerz and 3 others

The young half had just signed a two-year contract extension with the Red V.​

Young St George Illawarra halfback Junior Talatau Amone is tonight in Police custody after being charged over an alleged hammer attack in Warrawong last month, per the Illawarra Mercury.

Amone was reportedly arrested at his home and charged with reckless grievous bodily harm, property damage and intimidation.
The incident is alleged to have occurred after the victim parked his vehicle on the nature strip in the area before starting work on a two-storey building in mid-November.

Amone's father, also named Talatau, is alleged to have come out of his house nearby and started taking photos of the vehicle, believing it to be illegally parked.

When questioned about his actions by the workmen on-site, he allegedly refused to respond before walking back into his house.
It's alleged that Amone Snr returned to the vehicle soon after, reached through an open window on the driver's side and ripped something out – believed to be the indicator toggle. He chucked it on the road before returning to his premises.

He emerged again soon after, along with his son – who was armed with a hammer – and another unknown male. 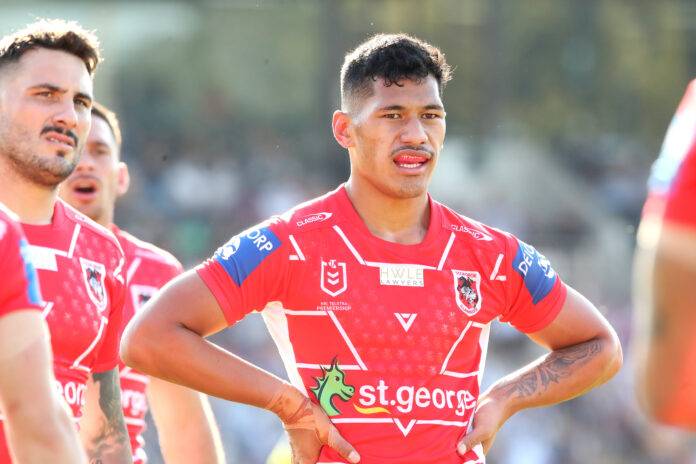 It's alleged that the Dragons star then jumped atop the vehicle, damaging the roof and smashing the windscreen with the hammer.
As the owner of the vehicle called Triple 0, the Amones and their associate climbed the ladder onto the roof of the work site, where Junior Amone swung the hammer at the victim, forcing him to jump onto a neighbouring roof.

Amone followed the victim, allegedly swinging the hammer continually. When the victim had nowhere else to go, he confronted Amone, who hit him with a hammer, causing him to fall off the roof. He hit an air conditioning unit during his fall.

Amone then allegedly encouraged his co-accused to continue the assault as his father and the unknown male got off the roof. A co-worker of the victim then removed the ladder, trapping Amone.

Police soon arrived on scene as the victim fled for his life. Though Amone and the unknown assailant did not return to their property following the alleged assault, their escape was caught on CCTV. When confronted by Police, the elder Amone denied anything had happened.

The victim suffered injuries to his arm, wrist and hip. He and his co-worker have reportedly identified Amone as the main assailant.

During an interview with Police, Amone declined to comment. He has not yet appeared in court but has had bail formally refused. He will be required back in court on Friday.

The club has released a brief statement on the matter, confirming Amone has been referred to the Integrity Unit.

"Dragons player Talatau Amone has been charged in relation to an alleged incident earlier this year.

The club has notified the NRL integrity unit.

As this is a legal matter the club will be making no further comment."
Reactions: Warriorshopeful, bruce, J_P and 4 others
Show hidden low quality content
YOU CAN NOT UNDER ANY CIRCUMSTANCES POST ANYTHING POTENTIALLY DEFAMATORY LIBELLOUS OR SLANDEROUS. Do not speculate names of unconfirmed stories in the media, make assumptions on a persons character, post unfavourable rumours or break name suppression orders. Doing so can have serious legal implications for you, admin and/or this forum.

ANY OFFENCES WILL RESULT IN A PERMANENT THREAD OR SITE BAN.

In simple terms, if its not an official release or events and names are not reported in any MAJOR news agencies then do not talk about it.
Share:
Share