Raw Power said:
I like Jazz coming off the bench... it seems he can take advantage of some tiring forwards and cause some havoc through the middle.
When he has started a game he tends to get a bit excited... leading him to be a bit of a loose cannon and giving away some cheap penalties.
He had a Great Game!
Click to expand...

Much better off the bench and always should be regardless of who we have available. Someone mentioned his improvement earlier and I reckon this is due to limiting his minutes rather than coaching etc. His mistakes always came under fatigue for me
Reactions: Raw Power, wizards rage, Worried2Death and 1 other person

We have Fusitua, Turner & Hayze to fill 2 positions. Against the Storm! He gets a reprieve for mine.
[/QUOTE]
Fusitua is out aint he
Reactions: wizards rage and Swanley

Can someone post the nz herald article about the meeting that cause the Warriors to upset tbe dragons?
Reactions: diehard

Lance155 said:
Can someone post the nz herald article about the meeting that cause the Warriors to upset tbe dragons?
Click to expand...

Rugby league: The impromptu Warriors meeting that paved the way for the upset NRL win over the Dragons​

An impromptu meeting of the Warriors playmakers helped to fuel Sunday's surprise 20-14 win over the Dragons, which has breathed new life into the Auckland club's season.

Off the back of a dismal performance against Manly, which followed a comprehensive round four defeat against the Roosters, the portents were not good ahead of the clash with a St George team that had won four on the bounce.

But the Warriors produced arguably their most polished 80 minute effort of the season, in difficult circumstances, to bank their third win of the season.

Along with an impressive performance by the pack and a solid completion rate, the key to the victory was the control exerted by the spine.

After playing like strangers against the Sea Eagles, the combination between Roger Tuivasa-Sheck, Kodi Nikorima, Sean O'Sullivan and Wayde Egan was cohesive, calm and confident.

It wasn't faultless, but there was more direction, better decision making and increased intent.

Egan revealed that the playmakers called their own summit meeting after the listless display against Sea Eagles, determined to right the wrongs.

"We blew probably six or seven chances against Manly," Egan told the Herald. "We let the team down last week so we took a lot of responsibility for the loss and we got together after [that] game, just us as a spine."

The quartet, along with injured half Chanel Harris Tavita and new signing Reece Walsh, convened last Sunday morning at the team's Central Coast base.

It was uncomfortable viewing – they watched clips from the Manly defeat – followed by a frank, honest discussion.

"We dissected the video and discussed between ourselves what we needed to be better at," said Egan. "We went through it all and then we really took a big role [last week]. We put a lot of weight on our shoulders I guess [last] week to get the team moving forward."

The soul searching and analysis paid off on Sunday. The attack was much sharper, with plenty of opportunities, particularly in the first half, off flat, fast ball.

"We knew our roles more this week and we had a game plan we executed really well," said Egan. "Last week we went away from what works for us.

"Sean, Kodi and Roger were outstanding with their talk and the ball got to where it needed to go in most good ball sets.

"Probably this one and the game against the Titans (round one) were our best performances, where we started well and just kept building throughout the game."

Egan was also smoother with his transitions and took better options, after a scratchy effort a week earlier.

"I'm a lot happier," admitted Egan. "I made a few poor choices last week, maybe trying to overplay my hand a bit. This week I went back to the basics, nice and simple and I got the ball where it needed to go most times."

There is still plenty to work on, as the fifth tackle plays were bungled on several occasions and coach Nathan Brown felt they were overly conservative as a team in the first half, before they chanced their arm more in the second.

But Sunday's victory was a massive result, the kind that can change the momentum of a campaign.

The alternative would have seen the Warriors heading to Melbourne on Sunday trying to stave off a fourth consecutive defeat, and the prospect of a 2-5 record, which would have been almost impossible to recover from.

Instead, a 50 per cent win ratio after a quarter of the season is something to build on, even though considerable improvement will be required to get anywhere near finals football. 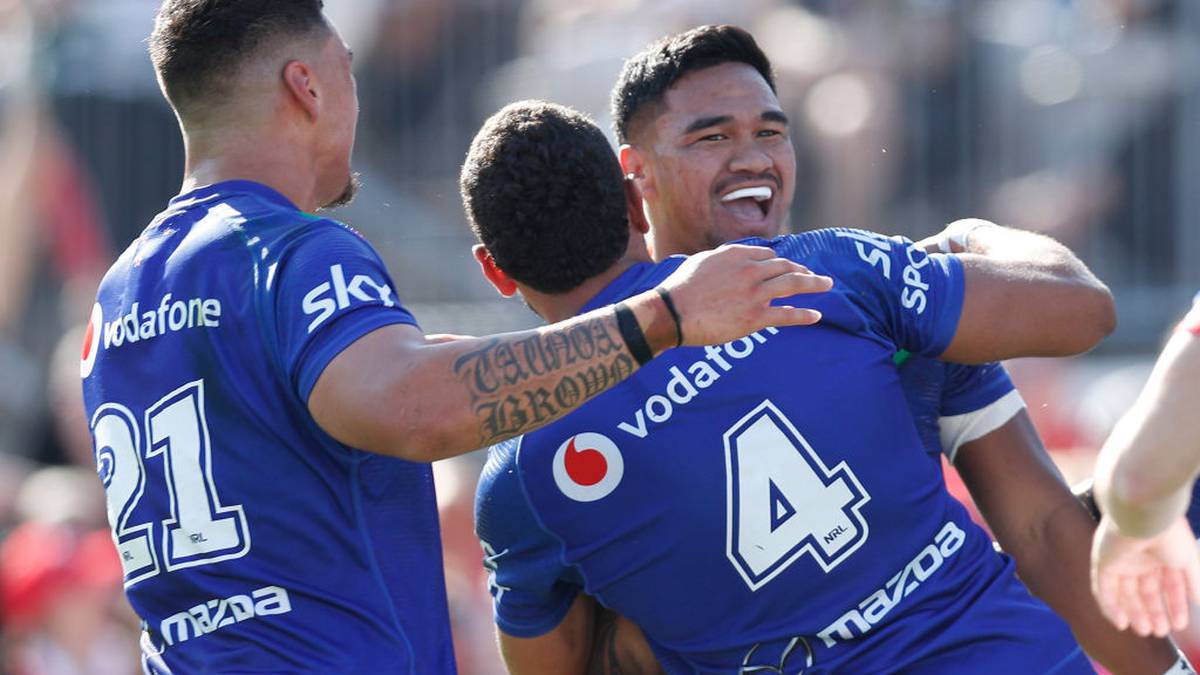 The Warriors came up with probably their best display of 2021 on Sunday.

www.nzherald.co.nz
Toggle signature
For they were Warriors ..... these mighty men of Valour
1 Chronicles 12:21
Reactions: Mr Dragon, Raw Power, Rizzah and 9 others

Gould's impact is probably a bit more far reaching than just fixing our pathways problem. Heard him talking to the boys before the Dragons game about the importance of Rogers 100th and what they group is willing to sacrifice. One of those pre origin gee ups. Must be good for the group to have such a big personality adress them from time to time.
Last edited: Apr 21, 2021
Reactions: zaggo, Big_Fattz, HoRneT041 and 13 others

Aman said:
Gould's impact is probably a bit more far reaching than just fixing our pathways problem. Heard him talking to the boys before the Dragons game about the importance of Rogers 100th and what they group is willing to sacrifice. One of those pre origin gee ups. Must be good for the group to have such a big personality adress them from time to time.
Click to expand...

Reminded me of work. Gotta be willing to sacrifice for the bloke next to you... And be confident he would do the same.
Reactions: Sup42

Goose bumps watching this.. including a part of the Gould pre match speech

Log in to Facebook to start sharing and connecting with your friends, family and people you know.

Wellington Warrior said:
Goose bumps watching this.. including a part of the Gould pre match speech

Log in to Facebook to start sharing and connecting with your friends, family and people you know.

I can only imagine he’ll also do an stirring Anzac prematch speech that will top this one. That’s gotta be worth an extra 20% in motivation alone.
Toggle signature
I’d take an ugly win over a flashy loss! Any day of the week..
Reactions: Worried2Death and Big_Fattz

Waiting For Premiership said:
We have Fusitua, Turner & Hayze to fill 2 positions. Against the Storm! He gets a reprieve for mine.
Click to expand...

Fusitua is out aint he
[/QUOTE]
Well he was named in the side wasn't he? Lol. Smoke screen. Take the heat off young Walsh. Now i read that Ken maybe out as well? & Berry may make his debut. I'm all for bloody our youngsters. But against the Storm is going to be one hell of a initiation!