I'm looking forward to this game..

Having the eels boys back helps....

Sharks have been poor lately, but my only concern is they win this and cement their spot in the 8.

Will be a good game hopefully.
Reactions: Off The Bench and Worried2Death

Season is on the line! Will be a close game I think, not having Townsend probably improves the Sharks chances, but Graham is a huge loss.

Quietly confident we can win this! Lets go boys.
Reactions: Tonbridge (Swanley) and Off The Bench

Must win match. Lose this, and there’s no hope. Johnny tuivasa shecks post should’ve done ya a favour with the refs. Very intelligent way to address the BS bias against our club. Many aussies resharing it too - it’s clear as day. Surely they’ll be more lenient known we’ve had enough. We’ll see.
Reactions: CHURCUZ, francis, Off The Bench and 1 other person

pompower said:
Sharks side is pretty killer on paper. Every time I look at their team, I have no idea how they aren't higher up the table.
Click to expand...

Been following them closely recently and your never out of a game against the Sharks. They've got lethal attack and at times have had teams at their mercy but they lose momentum in games with the most appalling unforced error turnover rate or a brain dead penalty conceded, usually at the most critical times which lets their opposition off the hook or allows them to build pressure.....worst of all their seems to be no accountability for their errors by the coach or senior players.

Shaun Johnson back in is obviously a huge threat, if he's running freely then yeah he could tear us a new one like he did last time, if he's got a dodgy groin and hammy tho then hopefully that inhibits his ability to impose himself in the game.....same for Fifita.

Chad out is not a loss for them, we'd been better off if he was playing tbh.......Graham is a loss as he gives them play making options, however his defence this year has been shocking.....him and Chad together wouldve been great to target.

Katoa and Mulitano are threats out wide, but they can come up with an error or 2.....id be bombing the shit out of these guys.

Been super impressed with Roycie Hunt, Talakai and Hamlin Uele who are barnstorming power runners.....if we dont shut them down early these guys could roll through us.

We've been playing hearty so we're in with a chance, just need to stay with them...Sharks are quite capable of shooting themselves in the foot (also capable of blowing a team off the park)
Reactions: Trugoy, Dunedin warrior, Defence and 2 others

Two clubs an thousands of fans many of them males hopes an dreams
Depend on SJs groin ..
Reactions: CHURCUZ, RobRoyMcCoy, Akkerz and 4 others

Fazz said:
I dunno. I'm not more worried about this side than the one they fielded last week as has been mentioned. Couple of weak spots I'd like to point out

1. Jesse Ramien - good player on his day, but those days come infrequently. He's also prone to dickfingers and horrible defensive reads. I'd be looking to exploit him.

2. Shaun Johnson - on paper this looks like a huge inclusions, but my memory extends to his time with us. It was not uncommon for Shaun Johnson to come back extremely gunshy after an injury. Of course the motivation of playing against us may offset that. I would look to run a ton of traffic at him early and force him back into his shell.

3. Briton Nikora - had an amazing debut season, but Sharks fans haven't been happy with him all year. He's also been dropped for poor defensive decisions recently. He's another one that I'd look to run some traffic at. Force him into making decisions and there's a good chance he's going to make a poor read.

4. Andrew Fifita - he's not the monster that he once was. It's a real shame Hetho isn't playing. He'd be the perfect one to get inside of Fifita's head to force him into doing some dumb shit (Please dear god don't try it Jazz you fucking dummy)

I think if we play to the level we've been playing for the last 6-7 weeks, we're a very good chance of coming away with the win. Provided Payten tears strips off Jazz to ensure he doesn't try and be a hero ... again, I really like our chances. Not Curran in the team to injure a rapidly improving Egan also bodes well for our chances.
Click to expand...

add to that i think that Dugan has been phoning it in recently and Woods can be great for 20 mins in a game, but fairly average for the rest. Not sure what it is sparks him, but you see in his attitude he comes and goes, IMO
Reactions: Fazz, Woofa and Off The Bench

All this talk of SJs groin and he will be hampered. He had a baby 2 weeks ago... the injury is just a cover for maternity leave.

Having said that, he probably hasn’t slept much lately and training and the game won’t have been his priority. As a player that is affected by his emotions I can see him having a quiet game.
Reactions: Woofa, Tonbridge (Swanley) and Off The Bench

warriorsfan92 said:
Must win match. Lose this, and there’s no hope. Johnny tuivasa shecks post should’ve done ya a favour with the refs.
Click to expand...

Crack up, a lot of NRL players commenting on his post.
Reactions: JBmurc, J_P, Beastmode and 6 others

pompower said:
Good news, Eels boys are back! Penrith keeping a hold of Hetherington for now though. 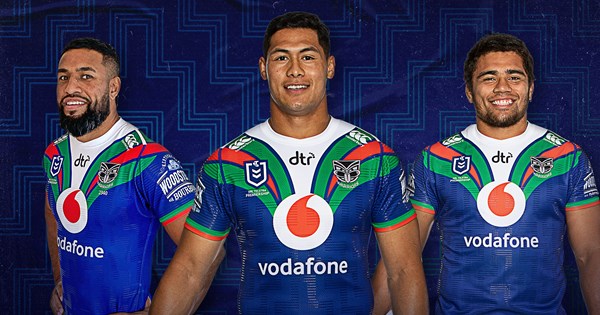 That bench wants to make me cry 0 impact. Passi would of helped, can he not come back for the last month?
I have been harsh on Papalii but happy for him to stay in the side as long as he's playing in the middle.
Reactions: Off The Bench and Worried2Death

Doesn't seem to matter too much what team the Warriors put out at the moment, they are playing some impressive footy. Hope they can play finals so I can enjoy what is happening. Who knows what we will get next year.
Reactions: CHURCUZ, PeonyBella, Off The Bench and 8 others

xWarrior said:
That bench wants to make me cry 0 impact. Passi would of helped, can he not come back for the last month?
I have been harsh on Papalii but happy for him to stay in the side as long as he's playing in the middle.
Click to expand...

Well Todd says Papalii is playing on the edge and Tohu Harris is going to prop.
Seems strange but lets wait and see
Reactions: CHURCUZ, john nick, Off The Bench and 2 others

Peewee said:
Well Todd says Papalii is playing on the edge and Tohu Harris is going to prop.
Seems strange but lets wait and see
Click to expand...

He likes to pull a few last minute switch tricks, like when he wouldn't name Turner to start ahead of Tohu Harris in the halves. His coaching idol is Ricky Stuart, he wants to be known as Tricky Todd.
Last edited: Sep 9, 2020
Reactions: john nick, Off The Bench, Billy Teets James and 3 others

Worried2Death said:
He likes to pull a few last minute switch tricks, like when he wouldn't name Turner to start ahead of Tohu Harris in the halves His coaching idol is Ricky Stuart, he wants to be known as Tricky Todd.
Click to expand...

That is the way they have been lining up when Papalii comes on though. Tohu Harris to prop and Jazz at lock
Reactions: Worried2Death

Be interesting to see how Ice goes at prop.

Been indifferent, but our man has been pretty strong on the ball this season,ask Payne Haas.

His D has been bone crunching of late.
Think he can go well in the middle where he should always have been.

SK had him everywhere and changing body shape.

Has that compact build and a bit of speed,hope he watched a bit of Sam Rapira .
Could prove a good move by coach if he can step up especially with Mad Jack being retained for the Panthers finals run.
Reactions: Warrior482, Off The Bench, CHURCUZ and 1 other person

He did a good one last year wearing other team jerseys and fumbling,dropping the ball etc on the tryline in front of the ref and being awarded.
Then when he crossed with a Warriors jersey on the ref kept finding infringement etc or sending it to the bunker.
Wish he could repost that and see what interest it would gain.
Reactions: Off The Bench, CHURCUZ, Worried2Death and 1 other person

Peewee said:
Well Todd says Papalii is playing on the edge and Tohu Harris is going to prop.
Seems strange but lets wait and see
Click to expand...

Great to see Jennings back!
Reactions: Off The Bench, Weno, jonesy101 and 1 other person
Show hidden low quality content