NZWF Official thread for the 2020 Round 11 Warriors team list and discussion...

The team to beat the Roosters:

Reactions: snake77 and Off The Bench

I can just tell this will be uninteresting
Reactions: MurrayTD

Agreed. A ruthless, professional, talented outfit that will stroll to victory in 2nd gear. My biggest worry is supercoach, and Tedesco getting rested midgame.
Reactions: ja_weez, Damo and Off The Bench

Big test for Payten - if he names the same team again with the only change being swapping Lawton from 13 to 12 we'll know he's lost the plot.
Reactions: Off The Bench, Rizzah, Old Sid and 1 other person

Honestly it doesnt matter what team is named we will still lose this game. Better to just forfeit i reckon.
Reactions: wizards rage and Mr Frank White

enterthewarrior said:
Honestly it doesnt matter what team is named we will still lose this game. Better to just forfeit i reckon.
Click to expand...

I am inclined to agree against the rorters.

My team for this week

bangbros18 said:
My team for this week

FMD.So you gonna to drop Green.Theres got to be an investigation
Reactions: Off The Bench and Orifice

john nick said:
FMD.So you gonna to drop Green.Theres got to be an investigation
Click to expand...

No investigation needed brother!
Reactions: Off The Bench and john nick 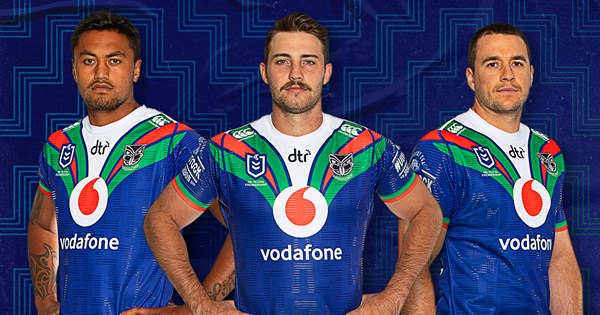 Numerous changes to side

Interim head coach Todd Payten has made a raft of changes for the Vodafone Warriors’ 11th-round encounter with defending premiers the Sydney Roosters at Central Coast Stadium in Gosford on Saturday.

Something weird happening -- press release says Egan is out injured but he's listed in the announced side. Paasi is also injured, and Herbert is out due to the HIA. So the side should be:

Fuck off Burr
Reactions: fizurg, Naumaifooty, Defence and 4 others

numerous changes? ffs its Burr and Pompey..... why isnt Haze getting a shot, why cant we give Turner a go.... the seasons done get rid of the dead wood....
Reactions: Naumaifooty, Worried2Death, diehard and 8 others

"Raft of changes" my arse. He's shuffled Blair to the bench and dropped Herbert. Egan is injured so Lawton to hooker and Jazz to 13 were forced. He's shuffled the deckchairs in the least disruptive was possible. I understand that there are restrictions on dropping the entire team, but fuck me. Payten has come up with possibly the least effective reshuffle available.

- Why the fuck is Hiku somehow still there? He's providing piss all on attack and Tedesco might set up 8 tries against him this week

- Herbert dropped for bombing a try? Okay great ... lets keep Hiku and promote *checks notes* ADAM FUCKING POMPEY? With apologies to his family if they're on here, the kid is fucking hopeless

- Blair to the bench? Yeah, that's a great fucking call. He will definitely provide impact. Definitely not a toiler that's best suited to absorbing the opening exchanges

- BURR FUCKING BURR? What did Murchie do that's seen him relegated to the shadow realm? Could we not given Curran a shot? Nope. 'safe' ol' never gonna break the line Burr.

- Yes lets continue to persist with the 'game manager' halfback that not only doesn't manage the game, but kills 9/10 attacking raids dead in their tracks. But we've gotta build continuity for when he's here during the less disrupted 2021 season don't w- oh.

Fuck this rabble and doubly fuck Payten. All his caretaker reign is showing me is that he doesn't have any original ideas or the ability to bring the squad together. I'll be watching this week and actively supporting the Roosters. I'm not even going to pretend to give these frauds the time of day this week.
Reactions: Beastmode, Worried2Death, Off The Bench and 9 others

How can you plan on sending a message if you pick Blair after his (non)-effort on Sunday?
Hayze Perham must be the worst trainer in the NRL. Looks good when he gets a chance in first grade yet two head coaches now (Sk and Payten) don't see him as being better than Pompey. And does Beale really deserve to have fallen that far? He hasn't set the world on fire but to not even make the 21 when we have so few options is a hefty fall considering he's far from the only centre option who has been shithouse. I couldn't have picked Hiku after last week so for Beale not to make the 21 he has really gone south
Reactions: Worried2Death, Tragic, Off The Bench and 2 others

I think those are the longest odds I've ever seen for one game lmao.
Reactions: Tragic, Rizzah, Off The Bench and 1 other person

EDIT: And what a flog I am for not reading pompower had already highlighted this above... I'll probably be the new Warriors CEO by the end of the week on that form

No wonder we can't win games when we can't even nail the team naming! 😂
Egan out with a shoulder injury yet we fuck up and still have in the team

Numerous changes to side

Interim head coach Todd Payten has made a raft of changes for the Vodafone Warriors’ 11th-round encounter with defending premiers the Sydney Roosters at Central Coast Stadium in Gosford on Saturday.

www.warriors.kiwi
Last edited: Jul 21, 2020
Reactions: Worried2Death, pompower, Off The Bench and 4 others

I think those are the longest odds I've ever seen for one game lmao.
Click to expand...

You've read that wrong bro, we are paying $13 to keep the deficit to 51 or less. If we lose by more than 51 then thats paying $1.10
Reactions: Worried2Death, Rizzah, Off The Bench and 5 others

DallyM said:
numerous changes? ffs its Burr and Pompey..... why isnt Haze getting a shot, why cant we give Turner a go.... the seasons done get rid of the dead wood....
Click to expand...