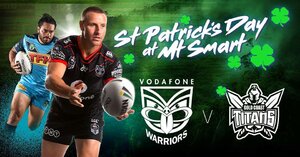 ​
NZWF Official thread for the 2018 Round 2 Warriors team list and discussion...

Contributor
Several months ago we would riot every Tuesday as Kearney named the same old players.....

I'd laugh if he changed the line up radically.....rest and rotaction....can you imagine it....
Reactions: Off The Bench, Worried2Death, frankspence and 5 others

I dont get people writing off the Titans. I want those forumers in Auckland to organise a (large) kidnap squad to grab Ryan James after the game. He would be a perfect fit for our new look squad.
Reactions: Worried2Death, Sup42, Dino Velvet and 5 others

Retain the same side Mooks.
Even if Mannering returns.
Sao deserves another run at lock , went well.
Reactions: Akkerz and Sup42

Gizzyfan said:
I dont get people writing off the Titans. I want those forumers in Auckland to organise a (large) kidnap squad to grab Ryan James after the game. He would be a perfect fit for our new look squad.
Click to expand...

There are no easybeats in the NRL so not writing them off but they are surely a bottom 8 side so if we are the real deal then we should beat them.
Reactions: Sup42, frankspence, Defence and 3 others

Tragic said:
There are no easybeats in the NRL so not writing them off but they are surely a bottom 8 side so if we are the real deal then we should beat them.
Click to expand...

Oath, if you can’t have expectations they should win this one, don’t have any expectations for a win ever.
Reactions: Viking, Tonbridge (Swanley), Sup42 and 1 other person

We are clearly the better side, are at home, and have won 13 of the last 14 encounters. You never write a team off, it's more about our ability to consistently perform regardless of the opposition, if we play well again we should bury them.
Reactions: Sup42, frankspence, Off The Bench and 1 other person

but i still got my cash on our boys 13+...mind you thats the favourite bet at the TAB LOL !!
Reactions: bruce, tajhay, Off The Bench and 1 other person

Contributor
Trial game means nothing and both teams not only realise that but would of played a slightly different style knowing we face each other again so quickly.

Titans also come in pounding their chests after tasting victory.

These are the reasons we rock into week 3 with 2 W’s beside our name.

Never underestimate the enemy, however we beat them in every category and are the better team.

BLAH!!
Reactions: Miket12 and Off The Bench

Three upsets in round 1, Warriors, Tigers and Titans. To a lesser degree Knights and Dragons, if only by the Dragons winning margin. Upsets are more common in the early rounds but in this comp you can expect one upset almost every round. No team can be taken lightly ever. Titans came back to win from 0-18, that shows character. If we are complacent, we will pay. The game is not played on paper and is not over till the final whistle. We need to believe but respect each game as it comes. No reason we can't win with the right attitude.
Reactions: Off The Bench, Draw and Pass, bruce and 3 others

Don't mind who's named just want to see the same effort, commitment, giving a fuck and marked improvements plus a dash of consistency.

There, that should do it for me.
Reactions: Off The Bench

Gizzyfan said:
I dont get people writing off the Titans. I want those forumers in Auckland to organise a (large) kidnap squad to grab Ryan James after the game. He would be a perfect fit for our new look squad.
Click to expand...

Rightly so, there are no teams worth writing off yet, particularly the squirrel grippers.

They will need to play HARD to win this and every game.

Fluctuating effort is a recipe for disaster. Every game should be played like a final.
Reactions: YeahNah 4020, Off The Bench, bruce and 1 other person

Danpatmac said:
They will need to play HARD to win this and every game.

Fluctuating effort is a recipe for disaster. Every game should be played like a final.
Click to expand...

So would you say, since we have some depth in positions now, slackers and players not giving 100% shouldnt get picked for next match ?
Reactions: YeahNah 4020, Billyspleen75, Citygirl and 1 other person

Waiting For Premiership said:
So would you say, since we have some depth in positions now, slackers and players not giving 100% shouldnt get picked for next match ?
Click to expand...

I think people who performed in game one should get one chance to redeem themselves if they perform poorly this week. But no more than that.
Reactions: YeahNah 4020 and Dino Velvet

Paasi should really be in the side, proved to be a class above for the ISP team on the weekend coming back from injury. For either Pulu or Lisone, don't mind which.

As for Sam Cook, I have never rated him, probably only saw 6 games of his last year though, some on here who have seen more of him rate him so willing to leave him in the side for now due to his versatility which would appear to be his biggest asset. Must say though, he copped slap in the mouth shortly after he came on, then crouched to his knees to recover, hookers don't have that luxury, he needed to be at the next ruck and wasn't. Either incapacitated or at the next tackle, no more Konrad Hurrells on their haunches a bit sore. Sorry for the tough love, but welcome to first grade.
Reactions: OMG, YeahNah 4020, Off The Bench and 6 others

Waiting For Premiership said:
So would you say, since we have some depth in positions now, slackers and players not giving 100% shouldnt get picked for next match ?
Click to expand...

Depends thats the art of coaching

He has retained the same starting line-up as well as the same four interchange forwards who guided the Vodafone Warriors to a 32-20 win over South Sydney last Saturday, the club’s first success in Perth in 10 encounters in 22 years.

Also included on the extended bench are the same four players – Jazz Tevaga, Anthony Gelling, Agnatius Paasi and Mason Lino – who were dropped off before the final 17 was confirmed for the match at Perth Stadium.

“What we achieved in Perth was certainly pleasing after the players had worked really hard in the preseason,” said Kearney.

“The result there brought a sense of relief and also a sense of confidence in the way the players went about executing the game plan.

“But for us it’s now all about this week and preparing well to give us the best chance of performing well on Saturday.”

The first home match of the season gives the Vodafone Warriors an opportunity to open a campaign with back-to-back wins for only the third time in 24 seasons since entering the competition in 1995. The first was in 2007 when they beat Parramatta 34-18 and Brisbane 24-14 while in their first outings in 2009 they accounted for Parramatta 26-18 and Manly-Warringah 26-24.

The Gold Coast clash on Saturday is the feature attraction in a triple header on a game day rich in Irish flavour as the Vodafone Warriors use the occasion to celebrate St Patrick’s Day. One of the features off the field will be the creation of a pop-up Irish bar known as the Simon O’Manner Inn.

The man after whom the bar is named – veteran second rower Simon Mannering – is again missing from the squad as he recovers from a shoulder injury he picked up in the 20-14 trial win over the Titans on the Sunshine Coast on February 24.

The Vodafone Warriors kept errors to a minimum in their Perth victory – just six in total – in achieving an 80 per cent competition rate (28 from 35 sets).

Afoa had the most post-contact metres (63) of any player on the field and also produced 27 tackles without a miss in his 47 minutes on the field.

Happy with that. Nobody deserves to lose their spot after a win in Perth. Paasi’s stats were pretty phenomenal in reserve grade and with mannering still to return, all of the forwards are under pressure. Great to see some real depth in our pack for the first time in a long time.

Kata is the only guy under the microscope for me. But even then, take out the sinbin and one howler in Defense and he wasn’t that bad. Hopefully he can have an error free week and get back to the form he showed a few years back
Reactions: Tonbridge (Swanley), Dino Velvet, Johnnyray and 5 others

Have put my pitchfork in the garage.
Reactions: Pozza, Off The Bench, Viking and 7 others
Show hidden low quality content