matiunz said:
Don’t think it works in the Pacific does it?
Click to expand...

Yeah, I stopped being lazy and just checked., Sky pacific have the rights.

Iwe have quite a strong team this week on paper, if fusitua plays we could win this game we should be more hungry than penrith. Hopefully Blair should be refreshed also.
Reactions: bruce, Run_it_str8 and Off The Bench

Contributor
i wonder what the thinking is having Mason on the bench? Who is he there to cover?
Reactions: Run_it_str8

Contributor
i meant to say the extended bench. Sorry for some reason i cant edit my own posts atm.

gREVUS said:
i wonder what the thinking is having Mason on the bench? Who is he there to cover?
Click to expand...

They always name a half on the extended bench in case there's an unexpected injury during training.
Reactions: bruce, Hazman, gREVUS and 4 others

gREVUS said:
i wonder what the thinking is having Mason on the bench? Who is he there to cover?
Click to expand...

Or to give Green a rest after rowing the boat all season.

WellingtonOrca said:
They always name a half on the extended bench in case there's an unexpected injury during training.
Click to expand...

thanks - i never noticed, guess most time the extended bench doesnt mean that much to me.

gREVUS said:
thanks - i never noticed, guess most time the extended bench doesnt mean that much to me.
Click to expand...

I think losing Harris is a huge loss, Afoa is somewhat coverable. I dont feel unlike sharks and rabbits, forwards will be where we get done over. Despite being outright Favs thankfully due to the brilliant blues, we cant take this side softly. Look at their Roster, amazing back line.

But we really need to put the foot down offensively and get a roll on into the finals.

The other good news is the top 8 is pretty much already decided, unless one of the current top 8 teams lose more than 2/9 games left.

I remember 2 years in a row forward passes in the last minute to the panthers put us out of the finals so not another one thanks refs. Only just able to stomach the NRL again now, a week later. 3 big games this weekend strangely enough. We have a good chance of making the top 4. if we win 6/9 I reckon we will make top 4, definitely 7/9.

Come on SK, unleash the offensive playbook and get our amazing backs roster running.
Reactions: 3rdstriker

Lawton should be on the Bench covering everybody from Luke to every back in the team. Tevaga? No value.

I also want Tevaga off the team his strong game last week notwithstanding. If he plays it is guaranteed he will do a loose carry of give up a penalty at a terrible moment.

Any update on who came off extended bench?

I honestly dont think the panthers should be so far behind with the bookies. Look when Cleary was out, they started winning and havnt stopped. Ok Maloney makes a difference. But they still have a lot of talent. I really think we played smart last week but without offensive intensity. Johnson has to get the ball moving, i know greens job is game management but Johnson needs to help out there as well. along with some inspiring tries. his 1 ptr was great, we got robbed sadly.

So I hope we go into it thinking offense is the best defense. we will not get further than round 1 of finals if we dont start scoring a lot of tries every game. our defense is fine. its time SK.

Yeah Tevaga and Lisone for me are just not up to 1st grade at the moment. Lawton showed how intense he is, hes played hooker, 6,7, centre, winger. hes not little either. I think playing Tevaga ahead of him is mad. 3 forwards and one utility back.
Reactions: 3rdstriker

rugged said:
Any update on who came off extended bench?
Click to expand...

Joe Vuna a chance to play??
Surely not the match for it. 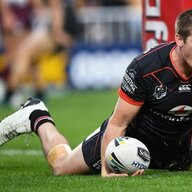 Karl Lawton strolling along Mission Bay 34 mins ago (accordingly to his Insta story), guess that rules him out.
Reactions: razzrillinger

Faithful said:
Karl Lawton strolling along Mission Bay 34 mins ago (accordingly to his Insta story), guess that rules him out.
Click to expand...

Would have been a mint walk along there today.

Flappn crazy. I dont see why we buy a "bigger" name centre than we currently use in Beale and then just dont use him while Kata just hits the ball up and denies our team any chance of being successful offensively as it takes more than running the ball into players. Both Storm and Dragons showed last night how important set plays are for scoring tries, id say 60% were set plays. And in those centres are often instrumental, especially big ones, or ones that can step, for us Beale is really the only one who fits in that, Peta tries a step. Beale needs to play in place of Kata or Hiku, I dont care which anymore. I dont think Hiku passing on to Fusitua makes him any better, his try assists come from our 6 in reality. Somebody who steps out wide could be lethal when connecting with somebody else who steps like Johnson. If kata isnt going to pass the ball, move Kata to wing and Fusitua dont pass the ball, do your step and step over people thing which has shown can make monster metres. How often have we scored 60m+ tries this year? About 1/20th of what Storm and Dragons scored in one game last night.

SK roll out that damn Offense playbook. We dont have room for one off hitups to appease your obssession with completions which you got from Bellamy and Bennet, its time for you to start coming up with your own plays and be your own man.

Will miss Afoa, but will really miss Harris, especially if we lose 6 in a row and need 3 in a row to make the 8 just as they return.

Vete straight into it for the storm. Bellamy just showing how tragic SKs roster call ups are.

Next year we need 2 centres. If you not going to play beale, cut him free. But we need some quality set plays with players in motion and centres stepping their opposition and offloading to the open winger.

Its time to bring it SK, we are still under performing and I feel you are holding us back. (common theme in the last 3 coaches)
Reactions: Faithful
Show hidden low quality content