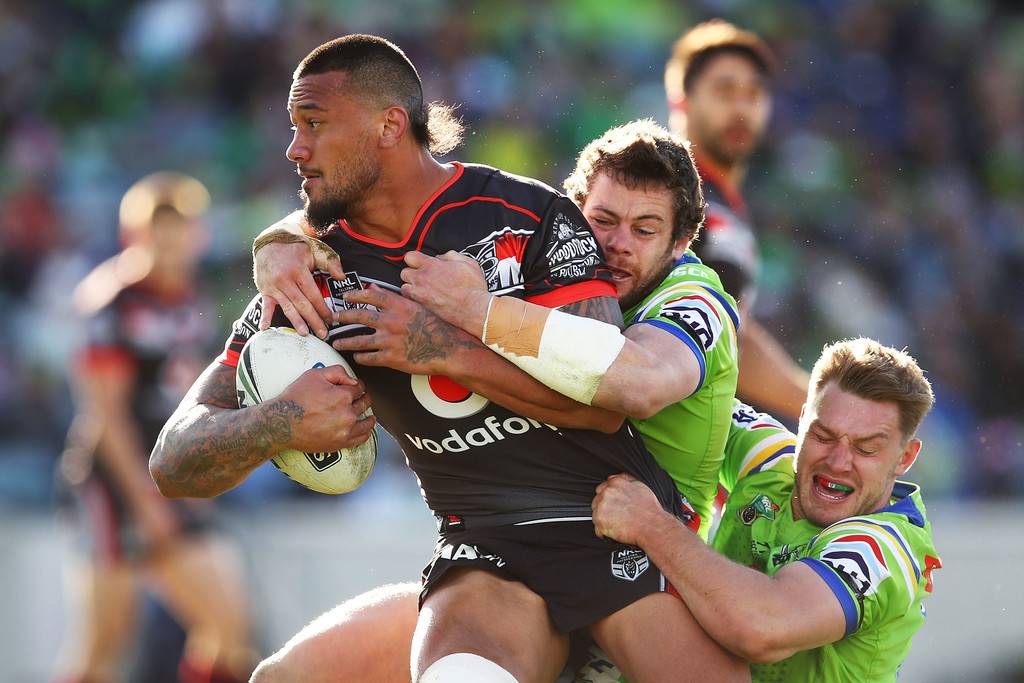 NZWF Official thread for the 2017 Round 7 Warriors team list and discussion...

I'm picking Kerney goes with the same team again. Maybe one change in the extra team just to keep everyone around here on there toes.

Unless Matulino is back. Then all bets are off. In that case I'm expecting full scale carnage. Great gnashing of teeth etc... All the worst parts of the bible basically.
Reactions: Off The Bench and Swanley

We all know wot this side will be.

Nothing to see here.

They could title this thread "which position (singular) might be changed on the bench ?
Last edited: Apr 11, 2017

If matulino is back will SK drop gubb or Sao?

AlexM said:
If matulino is back will SK drop gubb or Sao?
Click to expand...

He won’t be back this week, but seeing as Sao is only playing 15 odd minutes – you’d think he’d be the one to drop out. Pretty big upgrade innit.
Reactions: gREVUS

With no bank sponsers to cover up my warriors team is..

14. Who cares because they wont get on so ill go with Roache anyway
8. Rubber Tub Gubb
16. Heart Attack material season 2
17. Someone who can play more than 15 mins..
Reactions: snake77, FAN, Maddog and 5 others

With Rapana in such a devastating vein of form, I hope the warriors give him the Manu treatment, as in beat the shit out of him on every kick return. Even if you give away a penalty, Jordan can lose his rag on occasion, and it’ll show they are aren’t scared. He’ll probably run around Ken and score a try at some point anyway.
Reactions: Swanley and Sup42

We've got the 4th worst defense and the 6th worst offense in the league.

We got this.
Reactions: Red and frankspence

jonno said:
We've got the 4th worst defense and the 6th worst offense in the league.

So the 10th best attack and 12th best defence. Improving...
Reactions: Tragic, mt.wellington, RiceOwl and 2 others

Sao drops out for Vete IMO.
Kata is probably safe given Forans arrival has taken pressure off him for now.
the rest as is.

Need to keep Roache as with the Bigger pack running at him, Luke will fatigue much sooner
Reactions: AlexM and eudebrito

I'm not sold on Roache just yet. Something didnt sit well with me with his cameo off the bench against the Eels. haven't quite worked it out yet
Toggle signature
Old people are funny
Reactions: bubba-al

He nearly broke the line and had a good offload, other than that you can't really judge as he had about 10 minutes
Reactions: gREVUS

Inruin said:
I'm not sold on Roache just yet. Something didnt sit well with me with his cameo off the bench against the Eels. haven't quite worked it out yet
Click to expand...

All 9 minutes of it?

Nah, I don’t like the cameo appearances either, feels like you’re not making the most of your 17.

But with the head bin these days, its pretty risky to go 4 forwards and screw up your combinations with big reshuffles.

The warriors can have 4 of the 6 forwards play 80 minutes, without asking too much of them, so they can play a utility without much stress.

Especially with Foran’s hamstring and Roger’s habit of sticking his head in the wrong place.

If everything’s running perfectly, would probably bring Roache on at about the 30 minute mark to lift the pace, and then off again at the 50 minute mark for Luke to close it out. We don’t have the size to play them both at the same time like the kiwis did with Leleuai.
Reactions: Inruin, Akkerz and BeastMode

Not much to talk about.

Replace Gubb with Matulino, and swap CNK with Ken and that's our best side, I think.
Reactions: CompletionRate

What, I can't believe it.
So many changes

Its a relief to see a stable line up.
Reactions: fizurg, Akkerz, FAN and 2 others

Why is the club shouting at us?

Is there something we're not getting?
Reactions: Off The Bench, Draw and Pass, matiunz and 3 others

Capitolising HINGANO is meant to remind fans that losing Foran next year is no biggie.
Reactions: Off The Bench

Capitolising HINGANO is meant to remind fans that losing Foran next year is no biggie.
Click to expand...

What forans leaving next year?

But being serious, I just hope he ends up somewhere healthy....
Show hidden low quality content