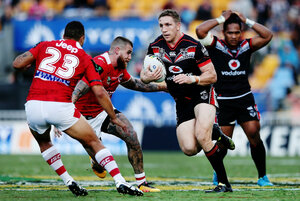 NZWF Official thread for the 2017 Round 4 Warriors team list and discussion...

Edit: dude Is a sports reporter for 1news. Could be an early scoop that Foran passed the fitness test Mt W mentioned in the Kieran Foran thread....
Reactions: mt.wellington, The Cheap Seats, Zarjaz and 7 others

Afakasi247 said:
Edit: dude Is a sports reporter for 1news. Could be an early scoop that Foran passed the fitness test Mt W mentioned in the Kieran Foran thread....
Click to expand...

Or go off early clutching the shoulder. Because it’s the warriors.
Reactions: Uncmase, Jaka, Glen and 9 others

Or go off early clutching the shoulder. Because it’s the warriors.
Click to expand...

lock in B) Eddie - go off early clutching the shoulder
Reactions: Swanley, Jaka, Stylez Davis and 5 others

If that happens I think its about time to rebrand the club as the Auckland Leaguies. The warrior brand is deadset cursed.
Reactions: Sup42 and Defence

Awesome news ! For me Kieran Foran is only thing that's keeping dream alive, so if he has been cleared to play I can't wait to see what he will do in the halves with Johnson. Hopefully with Kieran Foran now controlling ball more instead of just Shaun Johnson he can free up some space for him to score more and run some more creative attacking plays. Dude, I know I am asking a lot out of one player but I really hope Kieran Foran inclusion into our side is what will finally turn our season around so I am really hoping that rumours are true and he is cleared to play. Let's go NZ Warriors !
Last edited: Mar 21, 2017
Reactions: koolkat, Off The Bench, Jaka and 1 other person

eudebrito said:
If that happens I think its about time to rebrand the club as the Auckland Leaguies. The warrior brand is deadset cursed.
Click to expand...

The Auckland orange peelers has a ring to it.
Reactions: Jaka, Glen and Sup42

Defence said:
The Auckland orange peelers has a ring to it.
Click to expand...

The Auckland Housing Markets – the team that just keeps going up!
Last edited: Mar 22, 2017
Reactions: The Cheap Seats, Harlz, Sup42 and 3 others

If Foran is cleared to play I'm expecting a solid performance from him but I don't expect to see him putting his name up in lights for his first game back in almost a year.
Reactions: The Cheap Seats and Defence

* Dean Ritchie reports that Kieran Foran will finally play his first NRL game for the New Zealand Warriors this weekend.

Good to see you didn't try the Phone A Friend trick. We're Warriors fans. Which is why we don't have friends.

Any worth in him doing what Slater did and coming back off the bench, folks? My inclination would be to do that - build match fitness yadayada but not sure - how often do you see halves getting interchanged? Or start Foran and have Hingano on the bench?
Expand signature
All Hail Helen Keller, Patron Saint of Rugby League Officials.
Reactions: koolkat

Simon Mannering will claim the club record for most NRL appearances and new signing Kieran Foran has been included on an extended bench for the Vodafone Warriors’ fourth-round NRL encounter against St George Illawarra at UOW Jubilee Oval in Sydney on Sunday (6.30pm kick-off local time; 8.30pm NZT).

The 30-year-old Mannering, now in his 13th NRL campaign, drew level with the legendary Stacey Jones’ mark of 261 games in last Friday night’s clash against the Canterbury-Bankstown Bulldogs in Dunedin.

Mannering made his debut alongside Jones against Brisbane at Mount Smart Stadium on June 26, 2005, and has gone on to forge a reputation as one the game’s most consistent performers.

He underlined that yet again with a typically whole-hearted 80-minute display against the Bulldogs with 122 metres from 14 runs, 49 tackles without a miss, 11 decoys and 10 supports.

While Mannering takes outright ownership this week of the club record for most games, his Kiwi team-mate Kieran Foran is in line to play for the Vodafone Warriors for the first time; if he does he will become Vodafone Warrior #217. The 26-year-old former Manly and Parramatta playmaker was cleared by the NRL to resume his career in round three but missed the Dunedin match.

Captain Roger Tuivasa-Sheck, unavailable for the Forsyth Barr Stadium encounter, has been named to return this week while Tuimoala Lolohea moves back to the right wing where he started the season. Ken Maumalo switches back to the left wing to replace veteran Manu Vatuvei who was forced off with knee trouble in his first 2017 NRL outing last week.

Foran’s ex-Manly team-mate Ligi Sao is also in the extended squad after a strong return from a long injury lay-off in the Vodafone Warriors’ 36-0 win over Wests Tigers in the Intrust Super Premiership last Saturday.

The Vodafone Warriors head into the contest with one win and two losses in their first three matches while the Dragons have two victories and one defeat.

Overall the Dragons have a 19-5 win-loss advantage since the two clubs first met in 1999.
Reactions: Sup42 and Johnnyray

mrblonde said:
Any worth in him doing what Slater did and coming back off the bench, folks?
Click to expand...

Nah. I don't trust Kearney enough yet that he will play his full bench. In all seriousness though I don't mind him coming off the bench, but with our luck a wing or centre will go off injured and he'll end up being brought into play centre.

Any updates on Matulino? God we need him back soon.
Expand signature
“Insanity is doing the same thing over and over again, but expecting different results.”​
Reactions: warriorsfan92, Jaka, Glen and 4 others

Looks like same old same old, but if they can't get up and put in a massive effort for Mannering then there's probably nothing that will motivate them.
Reactions: Defence

Really gutted that we have not seen in changes. I knew we weren't going to see big ones, but I had hoped at least Gavet and Ayshford would have been in. I don't understand how they can say they had an honest review session, had it been honest several of these boys wouldn't have been in first grade
Reactions: warriorsfan92, koolkat, Weno and 6 others

love to know what they will do different against the dragons. they have looked damn impressive in two out of three games
Reactions: Jaka, Defence and Inruin

We've been having honest review session's for 3-4 seasons now. Not sure why they would suddenly work now.
Reactions: Swanley, Salatape, Jaka and 6 others
Show hidden low quality content