A thread for all 2017 Round 16 team lists, discussions, news and views. Serves as a team list thread and game day discussion for all games through the week (besides the Warriors one of course ).

Feel free to add team lists as they become available people. Thank you...

Reports that Thurston is gone for the season. Nothing confirmed yet though.

People say we get an easy ride through the Origin period. Panthers are getting an absolute golden walk in the park.

Jordan G said:
Reports that Thurston is gone for the season. Nothing confirmed yet though.

People say we get an easy ride through the Origin period. Panthers are getting an absolute golden walk in the park.
Click to expand...

Johnathan Thurston's NRL season is over after being told he requires surgery on his injured right shoulder.

The injury blow also means Thurston's 37-game Queensland State of Origin career is over, with the North Queensland playmaker retiring from representative football at the end of the year.

The 34-year-old re-injured his right shoulder in Queensland's 18-16 State of Origin victory over NSW on Wednesday night, when he made a tackle on Blues forward Tyson Frizell.

"Given it was already an injured shoulder, the club and the player decided he had to undergo surgery immediately, effectively ending his season for 2013," Cowboys coach Paul Green said.

Thurston said he had originally hoped the injury was just a cork, before scans on Thursday revealed the worst.


"And the best decision for myself and the club is to get the op done.

"I thought I might have been able to pump one or two more games out.

"But the medical advice I've been given is that if I wanted to live a normal life after football, then I had to have the surgery."

A six-month recovery period will also dash Thurston's hopes of finishing his representative career in the end-of-season home World Cup.

But the Morons and Kangaroos veteran added he would have no second thoughts on his decision to retire from representative football.

"I wanted to finish on a high this year with representative football. I'm comfortable with that decision I've made to retire from rep football." 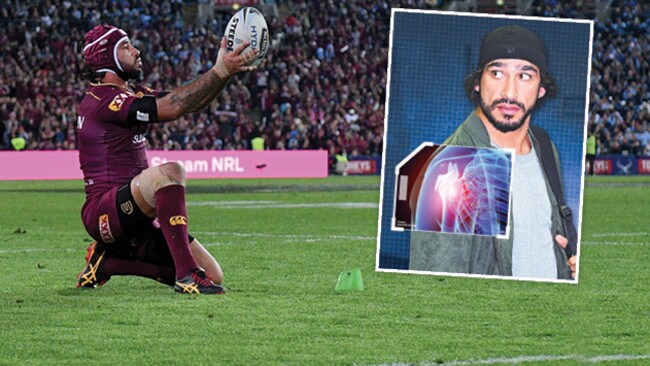 Origin is going to be interesting next year (getting ahead I know.)

Wonder if it's locked at 1-1 next year we might get a Langer/Johns "Sean O'Sullivan Thurston" scenario. Shit that sucks. Sad to think we will never see him don a QLD or Aus jersey again. Forever will be remembered a champion.
Reactions: Stalefish540, Ever Hopeful, MurrayTD and 2 others

tajhay said:
Shit that sucks. Sad to think we will never see him don a QLD or Aus jersey again. Forever will be remembered a champion.
Click to expand...

Yip, very sad. Some players from other clubs/countries are very easy to dislike but not JT.
Reactions: Viking, Warrior2017, Ever Hopeful and 1 other person

tajhay said:
Forever will be remembered a champion.
Click to expand...

GOAT for mine...
Reactions: Viking, shuffle, MurrayTD and 1 other person

Just as many images to remember of JT being the one to make try saving tackle after a 80 metre chase, as there is of his attacking mastery.

Had everything. Desire. Commitment, Skill, Class, vision, strength, speed, goal kicking. Also seemed like a genuine good bloke who was not bigger than the game, and re inforced this every half time by offering up his head gear to a new fan for life.

Has there been a better ambassador for rugby league as well?

His legacy will only grow with time.
Last edited: Jun 23, 2017
Reactions: mt.wellington

Contributor
Smith's better. For mine. More of a cheat but that's part of the game
Reactions: Defence

He has already scored 1 try & made some good runs..

Lolohea is playing for Tigers too
Reactions: Defence

Konnie really likes hugging the hayne plane, dry humps him any chance he can get.
Reactions: Defence

Hurrell done well, not challenged on defence but got a couple tries
Reactions: Defence

Poor tui, commentators are just ragging on him..
Reactions: Defence

Contributor
Anyone still convinced Lolohea is a half is dead set kidding themselves.
Reactions: zegy, WarriorBall and Tragic

Thought lolo was a knob here but now I just feel sorry for him he is so bad
Reactions: WarriorBall

tajhay said:
Shit that sucks. Sad to think we will never see him don a QLD or Aus jersey again. Forever will be remembered a champion.
Click to expand...

I remember when Johns retired and there was all of the talk about the former champion and he was a once in a life time player. The Telegraph had an article with the headline "I'll take over from Joey" and had a caption with what they made out was a goofy smile. Basically to put him in a bad light after the champion had retired. Thurston came out and said he never said that. Here we are 10 years later and he's probably up there in terms of the great halves debate and his goofy smile/laugh is loved.

Lolohea was getting ripped by the commentators tonight. Its gone from why isn't he playing halves at the Warriors to he's a make shift half. I thought the player that made way for Brooks (Littlejohn?) was guiding them around alright and may have been paired with Brooks when he came back. Cleary has his work cut out for him at the Tigers.
Reactions: mt.wellington

Contributor
Lolo was atrocious and the Tigers fans are starting to realise.