jonno said:
I'm out. Going to put on some Soundgarden and listen to someone who put their whole heart and soul into their work.
Click to expand...

Or you could just watch the Broncos and see what we should be aspiring to.

All week we heard about sticking to processes and making up for the 2nd half last week. That didn't really look like a side intent on putting last weeks performance behind them and earning some pride back.
Reactions: Zarjaz

Fuck didn't read the poll instructions properly, just clicked 1 cause it was the lowest number.

I've always given benefit of the doubt to our players year after year, but for the first time I genuinely believe we need a player clean out. We've had some piss weak performances over the last few years, some of last years bullshit stands out, but this shit tonight was gutless! Our middle was embarrassing, guys were dropping off like they weren't even there or just standing with them allowing offloads. No heart man. We as fans go through the same shit every year with this club, with their soulless performances.
Johnson played like a headless chicken. The fucks going on there man?!
He's a runner, so FUCKN RUN!
Fark I could go on about each of these cats but fuck it, we're just 'outside noise' anyway, what do we know!
Well in my mind I know when a team plays with heart and passion, and we don't have it!!!
I'll exclude James Gavet from that statement, the only dude playing like he gives a fuck. Chur James.
Oh, and CNK at least he try's hard.
Reactions: Lord_m_80, Xfactor, Defence and 10 others

You are expecting a coach who doesnt even realise that he has 17 players at his disposal, to alter his copy and paste selection for Tuesdays?
Sorry thats just too much too expect.
Toggle signature
“Insanity is doing the same thing over and over again, but expecting different results.”​
Reactions: Wellington Warrior, Lord Gnome of Howick MBE, Inruin and 6 others

tajhay said:
You are expecting a coach who doesnt even realise that he has 17 players at his disposal, to alter his copy and paste selection for Tuesdays?
Sorry thats just too much too expect.
Click to expand...

Your Avatar progression is brilliant, shock to vomit to turd
Reactions: Lord_m_80, Xfactor, Defence and 9 others

Name the only Warriors player who didnt miss a tackle during the game.


Nathaniel Roache. The only player in the team who didnt play.
Click to expand...

We, as fans, must learn to have extremely low expectations for this team or we'll go mentally deranged.

Sadly, I don't know if I care anymore. Feels like I'm watching these games out of habit.....
Reactions: Defence, Lord Gnome of Howick MBE, Trugoy and 1 other person

St George kind of played how you want the Warriors to play… fast plays, a ton of offloads (with support) and forwards eating metres on toast.
Reactions: Lord Gnome of Howick MBE, hman, Viking and 1 other person

If Kearney doesn't make some major changes to the team for next week he should be immediately fired
Reactions: hman, Hadyn and James W

Shaun Johnson has to do time in reserves.

Defence said:
Probably not a good day for hanging jokes.

That's what gets me- in the past 5 years there has been some legit excuses but this year there's no excuses they're just shit.
Click to expand...

Where do we start.No support play .No offloads.So many missed tackles and thats just the start.fucking pussies
Reactions: Defence

Sorry fans and ex fans don't blame the coaches(there are enough of them plus the advisory board,) but the headless chooks playing cheif play maker headless p

So, who do I contact to express my disappointment? Serious question.
Reactions: matiunz and HornbyBrown

cheer up guys. its only a game. 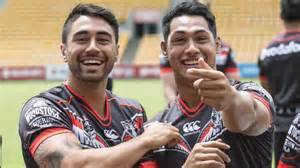 We have a shit record against the Dragons and away from Mt Smart. Add that and the weak second half last week and there is plenty of motivation to perform.

The Dragons have got their shit together pretty quickly when you look back at McGregor being tipped to be the first coach sacked this year. Hard to judge how well they played when a lot of it was basic rugby league supporting the ball carrier and working over the opposition. Basically they started their sets and we made things easy with poor defence, they capitalised well with guys pushing up to support.

We were lucky they missed a lot of their kicks.

28 missed tackles by half time is unacceptable. This comes off the back of last weeks poor second half which came off one of the best defensive efforts in years. Damn this club makes it hard, gives you hope then takes it away.
Reactions: davo and bruce

Don't the players have any shame... laughing..signings..after the match and more full the spectators who hang around after taking selfies..autographs etc..
This is the problem the players live in fantasy land ..think they can turn up week after week playing that rubbish...knowing SK won't drop them..some of the crowd hanging around after the games wanting autographs ..selfies etc...as long as this occurs week after week..we are doomed...
Reactions: Xfactor, matiunz and bruce

Only 4 more years until the next grand final appearance, I can see the pattern

The worst thing is, this is all dejavu.
Has there ever been a club that dishes this shit up almost yearly??!
Reactions: Defence and bruce

PNG Kiwi said:
Sorry fans and ex fans don't blame the coaches(there are enough of them plus the advisory board,) but the headless chooks playing chief play maker headless princess screwed the game let the cleanout begin p
Click to expand...

1 line break from the whole team??!? And Roger Tuivasa-Sheck no tackles with 3 missed. No words really
Reactions: hman, Hadyn, Brother Faisal and 2 others

Where's the second phase play? Why can't they shut down the offloads two weeks in a row and not try to offload themselves FFS!

I can't believe we offered Lillyman another contract when we have a couple of young, 6'3 plus, 115kg props plugging away in ISP, hungry for a shot. Lillyman must've made more metres in reverse than he made going forward, he was dominated that badly. Gavet was the only prop who can hold his head high tonight.
Reactions: Old Sid, hman, Hadyn and 2 others
Show hidden low quality content