Its traditional to show the ladder the other way up.
Reactions: Tonbridge (Swanley) and fizurg

Lord Gnome of Howick MBE said:
Its traditional to show the ladder the other way up.
Click to expand...

Pretty sure the sharks won’t be top 4, Ennis (even Barba too) is a huge loss.

Pretty sure the roosters will make the 8

Halfway sure the warriors will make the 8, if injury free.

Eels are a Corey Norman injury away for being rudderless, Semi might be exiled to union in France before long

Like the Titans on paper, but the “nomads” punching above their weight of last year is flipped by Mr Ego Hayne.

Dark horse – Rabbitohs, boring, boring team, but if all the stars are on the field and can bothered (GI, the burgesses not named Sam) could make a run.
Reactions: Defence

Contributor
Noone on .com is buying the warriors this year, only the nz correspondent as them 8th.

Contributor
NRL 2017 ladder projection: where your club will finish after 26 rounds

A STATISTICIAN who successfully predicted 75 per cent of NRL results in 2016 has run through the draw in 2017 and predicted where every team will finish on the ladder after 26 rounds.

Taking into account each team’s roster, fixtures, venues and attacking and defensive rating, Joel Carbone simulated the 2017 NRL season and projected the ladder for the end of the regular season.

After running the numbers, here’s the ladder Carbone expects to see at the start of\ September this year, with the percentage chance each club has of making the finals and winning the premiership. 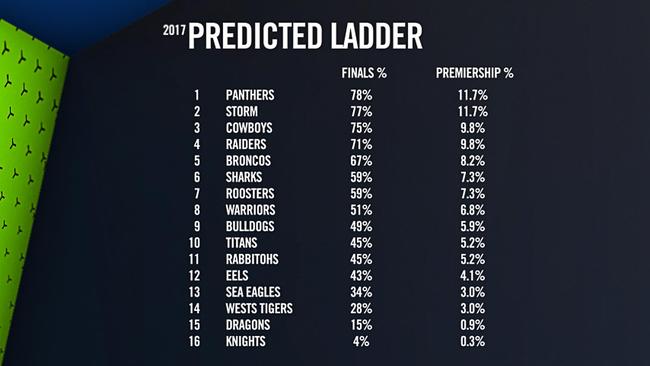 Contributor
This is Greg Alexander's comments and predictions for 2017. His comments are similar to everyone else.

WARRIORS
ANOTHER pre-season full of hope and potential, surely the signing of Kieran Foran and coach Stephen Kearney are the missing pieces to the puzzle that is the Warriors. After making the decider in 2011, the Warriors have failed to make the finals in the following five seasons. Roger Tuivasa-Sheck’s injury and Issac Luke’s indifferent form didn’t help their 2016 campaign, but they still had a chance to make the finals coming into the last month. Inexplicably they lost their last four games. The last two were against Wests Tigers and Parramatta at Mt Smart Stadium. They finished only three points out of the eight. That sort of scenario is all too familiar. With that in mind, when you look at the squad for 2017, which is an outstanding list of players, there is still that nagging doubt that they can get the job done. With Foran joining, it gives the Warriors an all-Kiwi spine. I’ve got little doubt about Foran returning to his best once he does get on the field. Still in his prime rugby league years, he’ll add that steely resolve, toughness and ability to create space for his runners that could be the key. 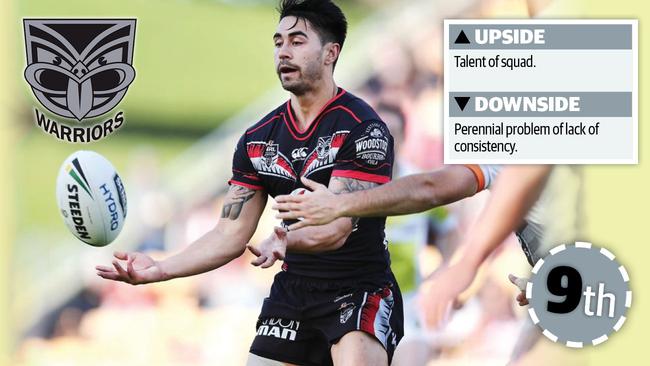 A formiddable spine but still no finals for the Warriors.
The other big signing, Kearney looks to be a good fit. Success as the Kiwi coach, assistant to Bellamy and Bennett and two years as head coach of the Eels. hose two years might have taught him more about what’s in front of him than the 10 years as an assistant. It will be crucial that the coach can instil resilience, discipline and consistency in their performances. Basically, what has been missing at crucial times in their seasons. The attacking ability of the backline led by the genius of Shaun Johnson means it’s the best side they’ve been able to field since their inception. Size, speed and skill in abundance across the remainder of the backline. Add the footwork of Roger Tuivasa-Sheck from the back and the Warriors should have plenty of points in them. Two players they would hope for better seasons from are Luke and Ben Mautilino. Luke needs to recapture his running game while it was a rare, quiet year for Mautilino who is regarded as one of the best in the game. Ryan Hoffman and Simon Mannering will work tirelessly and some promising young forwards give them a pack to at least match the opposition. If the Warriors show some steel in defence, they should be back in the finals.

Well, had to take a look back to see how far off the mark I was again with my season predictions. Another season of huge high hopes for this club, putting them in at 6th spot was being very realistic considering the talent on paper in our spine.