NZWF Official thread for the 2016 Round 8 Warriors team list and discussion.

That bench absolutely kills me.

Hopefully Wright is only there in case Fusitua can't play or something... Otherwise I don't know whatmthenfuck is going on there. You can't carry literally just outside back cover...
Reactions: 3 users

Gentlemen, let me be the first to tell you that is our strongest available 13 possible for season 2016 and if we are to win the premiership / GF, it will be with that line up. The bench needs work, not entirely sure on the logic.

It’s all mental now. Can we shape up in that department. 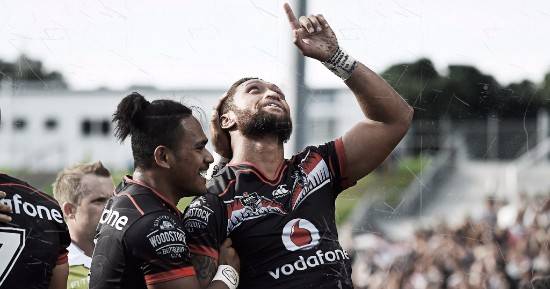 The Beast is back for Anzac Day match

Manu Vatuvei returns on the left wing with Tuimoala Lolohea confirmed to start at fullback and Thomas Leuluai in the halves for the Vodafone Warriors’ eighth-round Anzac Day encounter with Melbourne at AAMI Park on Monday (7.00pm kick-off local time; 9.00pm NZT).

Vatuvei, just two short of 150 career tries, will make his fifth appearance of the season after missing the last two games with a hamstring injury.

The 30-year-old 214-game veteran’s last outing was the 32-28 golden point win over the Sydney Roosters on April 3.

Lolohea takes over at fullback for Roger Tuivasa-Sheck, who has had his first season with the club cruelly ended after rupturing the anterior cruciate ligament in his left knee early in Saturday night’s memorable 24-20 win over the Bulldogs in Wellington.

Leuluai starts his first game in almost a year after coming on to play 64 minutes at halfback following Tuivasa-Sheck’s 16th-minute exit at Westpac Stadium.

With Vatuvei back, utility Jonathan Wright moves to the bench alongside forwards Jacob Lillyman, Charlie Gubb and Ligi Sao.

Gubb better pull his finger out, and why the fuck is Wright there, man that cappy does some fucked up, strange as, bench calls
Reactions: 7 users

After all these years smoking I cant believe it was the Warriors Round 8 bench that ended up giving me cancer...

WTF that bench is absolutely a joke. I understand cover, but if your worried about the outside backs play Konrad for starters at least he can play multiple posi's allround. Gubb..... he must have something over cappy, why persevere. Better NSW players them him in the ranks.

Contributor
Pretty Happy with the starting team, shame Tui couldn't be at 6 but he's our best option at fullback now that Roger is out and TL (Snr) is a pretty handy 6.

Don't get the bench at all, what value does Wright have? Perhaps Manu not 100%?
What's Vete done wrong to have gumpy Gubb picked over him each week?
Reactions: 1 users

I suspect Wright has been named as a contingency plan. I'm not entirely mad at it. These are my thoughts:

I've considered what I believe to be the logic behind it. If It's not my theory, then beats the hell out of me what Cappy's thinking!
Reactions: 15 users

Perth warrior said:
WTF that bench is absolutely a joke. I understand cover, but if your worried about the outside backs play Konrad for starters at least he can play multiple posi's allround. Gubb..... he must have something over cappy, why persevere. Better NSW players them him in the ranks.

Yeah I agree. If there was a need for a back utility than Konrad Hurrell was the perfect fit. Could play outside back but also play as a decent enough battering ram.

Last time Jonathan Wright played on the bench it was a complete fuck up. If I remember correctly it was as cover for fullback.

Speechless about this selection.

A winger on the bench...hitting new lows right there. If it was Manu on the bench wouldnt mind as he can provide some punch up the middle and be injury cover...but Wright? WTF. He isnt even a utility and can only cover wing!
Reactions: 1 user

Pretty disappointed to b honest wit that bench, TL has said he is not 80 min fit so y the heck is wright there? U gonna have Wright coming on in the halves? Am guessing he may put tui to the halves n wright at the bak if needed but still for mind a poor selection. Gubb and Sao did nothing really to warrant their place on the bench. Good to see the big fella manu back.

Who would be fullback cover ....wright or konnie?
I,d say wright.
Every other position its konnie.
Strange bench with Sao and gubb would have preferred lane/vete/ali
Reactions: 1 user

Yeah I hate this selection. Why oh why is Wright on the bench. Surely it's only because Cappy thinks Manu will pull up injured or Fusitua will have a mare? Complete waste, especially with Lao coming back off a long lay-off.
Reactions: 1 users

kos said:
Who would be fullback cover ....Wright or konnie?
Click to expand...

I would have thought Fusitua out of that lot would be moved to FB.
Reactions: 4 users

In Cappy's ideal world, none of the outside backs are injured during the game and Wright doesn't have to be used.

So this rookie ass idiot wants to only use 3 subs again in a season where the interchange has been reduced.
Reactions: 4 users 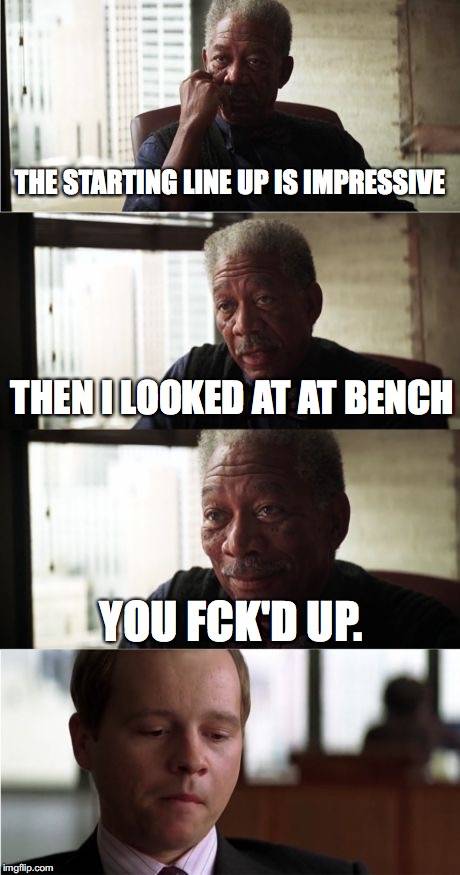