NRL 2016 Round 10 - General Discussion​
Rep round is over and its back to business.

Teams listed below - but may change due to the midseason transfers going on. 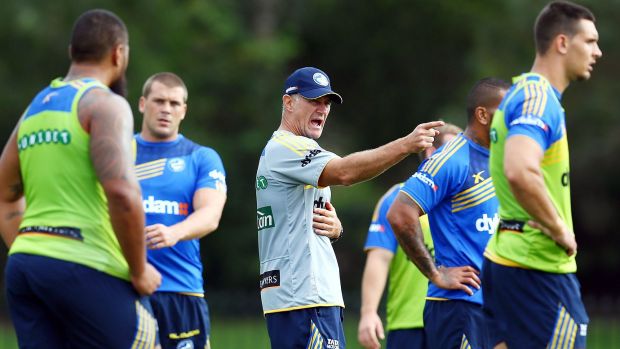 Can they still make the finals?: Coach Brad Arthur puts the Eels through their paces. Photo: Getty Images

Preview: After a week off this will give a good indication of where these middle-of-the-ladder outfits sit. Canberra have been hit hard by injuries and the Dragons have had a tough start to the year. But that is behind them now and this is a game both need to win if they want to be playing finals. Jack de Belin's injury is a big loss to the Dragons, but they welcome back Joel Thompson from suspension. The Dragons are always tough to beat at Kogarah.

Key: Blake Austin and Aidan Sezer have just two more matches to press for NSW selection. The time is now.

Preview: After enduring the worst fortnight in club history, the Eels will no doubt be glad to get back on the field and let their footy do the talking. With zero points to their name following the sanctions handed down for salary cap breaches, they can ill afford to lose against the Rabbitohs if they still want to make the finals. They'll have to do it, though, without skippers Kieran Foran and Tim Mannah. South Sydney, meanwhile, are on a run of four losses and coach Michael Maguire has made plenty of changes.

Key: Will Greg Inglis' shift to five-eighth from fullback prove a stroke of genius or costly experiment?

Preview: Just one round after taking a home game over the mountains to Bathurst, the Panthers have now made a temporary switch across the Tasman where they will host the Warriors on their own turf. Centre Waqa Blake (hip) returns to a fairly settled line-up against a Warriors side that has been anything but. Stood down by the club for admitting to mixing prescription drugs with alcohol, Ben Matulino and Bodene Thompson have been recalled, while key men Tuimoala Lolohea (knee) and Thomas Leuluai (hamstring) come back from injury.

Key: Can the Warriors stay in the game for long enough against a Penrith side whose every game this year has been decided in the final five minutes?

Preview: This is a mouth-watering clash between two in-form teams as part of the NRL's Brisbane double-header. The Storm have scored 80 unanswered points in their past two fixtures to climb into third spot on the ladder. North Queensland are the form team of the competition with five straight wins lifting the premiers to top spot. Unsurprisingly, both clubs have picked unchanged teams for this clash.

Key: Who will get to grips with playing on a neutral venue first? It's a Storm home game but the Cowboys have no fear about visiting a packed Suncorp Stadium after their epic with Brisbane earlier this year.

Preview: So how much are two competition points worth? Manly have taken the gamble of an NRL payday by sending this home fixture to Suncorp Stadium where Brisbane are yet to lose this season. The Sea Eagles will at least be boosted by the return of Brett Stewart, enabling Dylan Walker to move back to the halves. Beaten by Cronulla last time out, Brisbane have some concerns with Alex Glenn injured and Adam Blair suspended. Jarrod Wallace will start at prop while Jai Arrow makes his long-awaited NRL debut from the bench.

Key: Brisbane have lost just twice in their past 18 matches at Suncorp Stadium. It's an away game technically but a full house will get the Broncos over the line.

Preview: The Knights might have the wood over Sharks, but all signs point to a one-sided affair on Sunday. Just one win in nine games has Newcastle anchored to the bottom of the ladder, while the Sharks are flying high with six wins on the trot. With Jarrod Mullen still injured, rookie Brock Lamb will get another chance in the halves alongside Trent Hodkinson for the Knights. Cronulla have made just one change to the side that beat Brisbane last start, with Luke Lewis named to start in the back row in place of Jayson Bukuya (suspended).

Key: With NSW State of Origin jumpers on the line, expect incumbent halfback Hodkinson and James Maloney to find an extra gear as the pair push their cases for selection.

Preview: The returns of skipper Aaron Woods (ankle), Tim Grant (knee) and Mitch Moses (groin) have been offset by the loss of James Tedesco (shoulder). He's been replaced by Justin Hunt, while new buy Elijah Taylor could be a late inclusion. Buoyed by upsetting South Sydney a fortnight ago, the Tigers could spring another surprise on an inconsistent Bulldogs side that will miss Will Hopoate for the next three weeks due to his religious beliefs. Sam Perrett will deputise in his place.

Key: The inclusion of Sam Kasiano at lock, with Greg Eastwood moving to the second row is a subtle one. Can the Tigers hold on against the biggest pack in the league?

Preview: A curious match-up to conclude round 10. The Roosters will strongly believe they can get on a roll now they have Mitchell Pearce, Boyd Cordner and Jared Waerea-Hargreaves back. The Titans haven't been the easybeats most thought they would be. However, the Roosters have some momentum after their 38-0 hammering of the Knights while the Titans fell to Melbourne by the same score last time. The Titans need to ensure their poor home form of previous seasons doesn't continue. Shaun Kenny-Dowall is out with a leg injury for the Roosters, Daniel Tupou comes in.

Key: The Roosters have won their last 10 matches when both Pearce and Waerea-Hargreaves have been in the side.

The floodlights tonight are even worse than Mt Smart

Fark me I am glad I'm not a Raiders supporter!!
Reactions: 1 users

ryno said:
Fark me I am glad I'm not a Raiders supporter!!
Click to expand...

What were they doing after the buzzer doing flick passes in their own half...sezer got so close with his first drop goal too...they would be gutted.
Reactions: 1 users

Not sure if the Warriors have ever done anything that stupid - although I have less than fond memories of a former Warriors player - 97/98 IIRC - who raised his arms in celebration as he was about to score the try.

That's right, celebrate before you score! For some reason, the fuddy duddies in Aussie league didn't catch on....

Anyhow, of course, the whole thing was from that instant freaking predictable. The ball drops out of his grip.
Reactions: 1 user

mrblonde said:
Not sure if the Warriors have ever done anything that stupid - although I have less than fond memories of a former Warriors player - 97/98 IIRC - who raised his arms in celebration as he was about to score the try.

That's right, celebrate before you score! For some reason, the fuddy duddies in Aussie league didn't catch on....

Anyhow, of course, the whole thing was from that instant freaking predictable. The ball drops out of his grip.
Click to expand...

When I was a lot younger, I was helping my father on the farm and we were using a log splitter on some trees he had cut down and I started mucking around. He looked at me and said, "Keep that up boy and I'll rip you a new one, sew it up and rip it open again". Health and Safety would have had a nightmare with us - I was driving tractors on public roads before I could ride a bicycle.

Fast forward to the Chiefs changing room and imagine The Fish celebrating again like he did in the Under 20's. I don't think Rennie is the sort of coach to tell the Fish that - I think he'd just do it!!!!
Last edited: May 13, 2016

With the raiders losing and assuming the Broncos beat manly, we will move into 6th place if we win this weekend.

Despite all that's happened, were actually right in the mix
Reactions: 1 users

ryno said:
Fark me I am glad I'm not a Raiders supporter!!
Click to expand...

At least they can look back at the glory days. Mind you it would suck supporting any team with Sticky Ricky at the helm.

wizards rage said:
With the raiders losing and assuming the Broncos beat manly, we will move into 6th place if we win this weekend.

Despite all that's happened, were actually right in the mix
Click to expand...

Too early in the season for us to make it easier on ourselves. This statement all but guarantees a loss.

wizards rage said:
With the raiders losing and assuming the Broncos beat manly, we will move into 6th place if we win this weekend.

Despite all that's happened, were actually right in the mix
Click to expand...

And we can beat the Raiders a week after that, and then the Bye. That's 6 points. Top 4? Oh, shoot me now!
Reactions: 1 user

diehard said:
And we can beat the Raiders a week after that, and then the Bye. That's 6 points. Top 4? Oh, shoot me now!
Click to expand...

What could go wrong?
Reactions: 2 users

Jordan G said:
What could go wrong?
Click to expand...

they could run out to "Poker Face!"
Reactions: 1 user

could this be the Sharks year?

They have launched themselves to 2 on the table