surfin said:
Te he he, that's awesome funny, for a brief moment I thought you had written something new and original, but like Manu I was wrong again. How are you going to contribute here once Manu retires? As for your take on the Warriors defence how do they ever win a game. By the way Manu's momentum hadn't stopped because he got the offload away, unfortunately to the wrong player of course but I'm sure you may be aware of this point.
Click to expand...

Well being wrong does become a habit for some people, not many in Vatuvei's league though...When Vatuvei finally moves off the wing i will probably contribute less in terms of talking about the most consistently error prone player in the league along with one of it's worst defensive players all rolled into one player.

The Warriors win games by only beating teams outside the top eight, who are just as likely to make as many errors or leak as many tries as us...but i'm pretty sure we're still leading in at least one of those categories.

So you're saying Vatuvei can only throw a dumb off-load while he still has momentum...he cant dump one out the back without looking first when he's stopped making any forward progress?
Reactions: OMG

Iafetas Kickstand Wang said:
How about not throwing an offload at that stage of the game. Another 2-3 minutes without a try against and the game is sealed. There is so much of this in the Warriors play - get really shitfaced about game management and then go phaarrrkk me, how did we get run down there? It all starts usually with something extremely soft or incredibly dumb and unnecessary.
Click to expand...

Good post...it's infuriating to watch because you know it's coming, it's like reading the same book for the 50th time, and so often it comes from the same players.
Reactions: OMG

jonno said:
I think this whole offside when he's onside debate highlights the irrationality that the manu fanboys bring to the table...
Click to expand...

Anyone who has been on this forum long enough will know that through your many different names and reincarnations you would be the most irrational person on here so maybe you shouldnt cast stones aye edd macker...
Reactions: KiwiWarrior, Boats n Hoes, Inruin and 6 others

wallacenz said:
I wouldnt blame Manu for that pass, you dont expect an opposition player to be that late back into the line, its unusual for play to have advanced that far and have someone charging onto the ball who isnt from your team. It was just bad luck for the Warriors
Click to expand...

I didn't like the offload, but it could have got us some sweet meters and maybe even points if it had stuck.

What I really didn't like was the rest of the team collectively going "come on ref" before the ref had blown the whistle... That was the one unpleasant moment in an otherwise awesome performance...
Reactions: gREVUS and wallacenz

jonno said:
I think this whole offside when he's onside debate highlights the irrationality that the manu fanboys bring to the table...
Click to expand...

I touched a nerve with that post... It'll have to go down as one of my all time favorites... 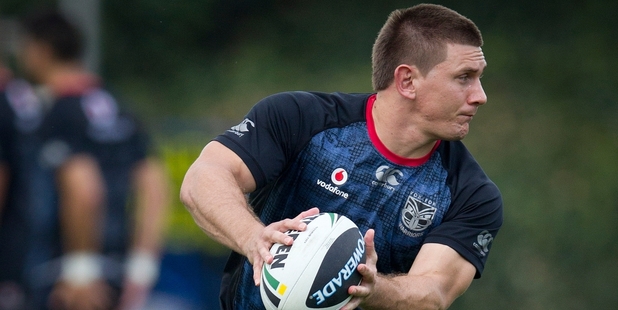 Jacob Lillyman will make his 200th NRL appearance when he runs out against the Canberra Raiders tomorrow. Photo / Sarah Ivey
Front-rower Jacob Lillyman has the respect of all his teammates but it's his comedic value as much as his relentless go-forward that has Warriors players raving.

While the likes of Manu Vatuvei and Konrad Hurrell might laugh louder, longer and more frequently than the rest, Warriors players rate the laconic and dry-witted Queenslander as the biggest joker of the lot.

"If you asked anyone, he's probably the funniest in the team," says propping partner Ben Matulino. "Just his sense of humour is the best. Like every team there's a group of funny guys and he's the funniest and always gets a couple of laughs. You guys [media] don't get to see that side which is unfortunate."

There's nothing funny about Lillyman when he takes the field, however, and the 31-year-old has been in career-best form recently, and will make his 200th NRL appearance against the Canberra Raiders at Mt Smart Stadium tomorrow.

"It is a big milestone and one I'm very proud of and it really does sneak up on you," said Lillyman. "But with how tough this competition is and the toll it takes on your body I'm really, really proud to bring up the 200 games."

After starting his career in the back-row with the North Queensland Cowboys back in 2003, Lillyman arrived at the Warriors in 2009 with 62 first-grade games under his belt. Two seasons later, then coach Ivan Cleary approached him with the idea of shifting into the front row, and after some initial scepticism, Lillyman eventually came around to his way of thinking.

"It probably took me a season to get used to it," Lillyman explained. "I wasn't too keen on the move at first but when Ivan put me there, I played better footy, so I guess the writing was on the wall. I ended up making the switch fulltime and haven't looked back since."

The positional change took his game to another level and after winning Queensland State of Origin selection with several interchange and 18th man cameos since 2006, Lillyman has looked right at home coming off the bench in the last four consecutive interstate matches.

Lillyman insists a desire to do his best for his club is driving him to new heights with the Warriors.

"I used to take more confidence out of playing Origin when I was younger, whereas now coming back to club footy I just want to make sure that I'm not a passenger," he said. "I maybe fell into that trap last year with a couple of the games where I backed-up. But this year I've made a point of coming back to club footy and not using the excuse of being tired, to really make that contribution, and so far so good."

He certainly achieved that in last week's dominant win over the Titans, backing up three days after Origin II to make 20 runs for 204m in a powerful 54-minute stretch.

"We were happy with the platform we laid last week but we've got to back it up and it's going to be a big challenge against a massive Canberra forward pack," he said.

"We're going to have to be ready and willing to roll up the sleeves to get that ground through the middle and give guys like Shaun [Johnson] and Chad [Townsend] field position to work their magic.

"I'm happy with where I'm at but there's still room for improvement and hopefully I can do that over the coming weeks."

Inruin said:
because our team is simple? Maybe Manu could take a few hints from Matulino and look before he passes?
Click to expand...

Why break the habit of a lifetime?

jonno said:
If we didn't have Manu in our team we'd have nothing to talk about...

6 from 6 conversions... What was Shaun Johnson on that day. Can we bottle it?

9 errors (which is great for us)

90% completed sets in the second half

Do that again and again please...
Click to expand...

mt.wellington said:
Anyone who has been on this forum long enough will know that through your many different names and reincarnations you would be the most irrational person on here so maybe you shouldnt cast stones aye edd macker...
Click to expand...

If its true that it takes one to know one then I'm by far the most qualified to be spotting irrational arguments.