With all due respect to the narrow minded clowns at puma, they needed to be informed that this is not a New Zealand representing team. There is no colour there that was on the original 1995 Jersey, and now they seem to think that we need more black and less grey?

Isnt it funny that the puma logo colours are grey/white and black?

And you expect us fans to believe that the Warriors give a shit about their fans or to please their sponsers?

What a joke of a jersey.

Warriors CEO Wayne Scurrah said the players and the club were thrilled with the look of the design.

"The Warriors are new in so many respects heading into the 2006 NRL season," he said.

"We're new in the front office, new in the football department with a new structure led by new head coach Ivan Cleary who has a squad that is, in many respects, new as well.

"And now we also have a new playing uniform and a new look, the first change in three years. It's a design that places us among elite company on a global scale."

The creation of the playing strip, which began a year ago, sees the Warriors aligned with the PUMA Pace concept produced by one of the world's top international fashion designers Neil Barrett.

Bob Vann, Country Manager PUMA New Zealand, said the Warriors were just one of two teams in Australasia to be outfitted in the PUMA International Pace Collection. The other team is Essendon in the AFL (Australian Football League).

PUMA will feature the Warriors in its 2006 football advertising campaign, alongside world soccer powers Italy and Cameroon. The Pace brand will be worn by 12 of the 32 teams at the 2006 World Cup finals in Germany.

Scurrah said he had received outstanding feedback from Warriors players about the new jersey, which features a round collar.

"There were plenty of complimentary remarks when they put it on for the first time when we had some photos taken of the players recently," he said.

The Warriors will debut the new playing strip in their first pre-season trial against Canberra at North Harbour Stadium on Sunday, February 12. The club's elite development players will wear the alternate jersey in the curtain-raiser against the North Harbour Tigers.

Here's a pic of Wairangi wearing the home jersey... i'm sure more will follow.

I think its actually bloody fantastic.

I'm stoked with the jersey.

The look of it looks outstanding from a design point of view and I feel we are the New Zealand Warriors so why not show New Zealand colours?

Hehe. It's pretty kewl I think. Could have been worse.

Look at the away strip!

This is bloody gorgeous.

I like it. But I dred to think how much it costs.

Also, Mosh, the club dictates what they want to the manufactuers. So if you are that angry, blame the Warriors.

Wiki said:
Look at the away strip!

I agree the away strip is great and the only one ill be buying but still the home strip is too damn black. It almost looks like one of the superleague sides.

Home...meh. I preferred the grey V. But it isn't horrible.

looks okay...but is heading towards a kind of All Black design

where is the away strip

Wiki said:
Look at the away strip!

I can't see anything? am i the only one? i really wanna see tha away strip
as far as the black one goes.... um...that took a year to design? ok, looks stealth like which is good, gee.. is it just me or is that vodafone logo getting bigger and bigger?

The home jersey looks very similar to their training shirt.
It's a pity they dropped the 'V', but all in all it looks ok. I swear there is more red on the jersey than grey as well

Just be thankful it looks nothing like this abomination! 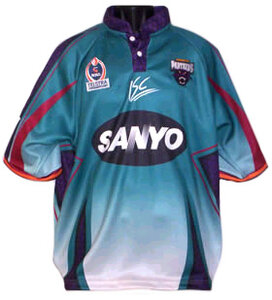 Mosh, in many regards I think the new Warriors regime have attempted to steer clear of the dead and buried Auckland Warriors, including jersey wise. Can't say I liked the old jersey anyway, as far as it not representing New Zealand, it didn't really represent Auckland either - blue and white is what I associate Auckland with, not blue, green and red.

Where's the away jersey?

Here's a pic from the tvnz site: 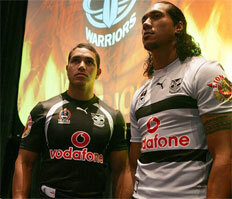