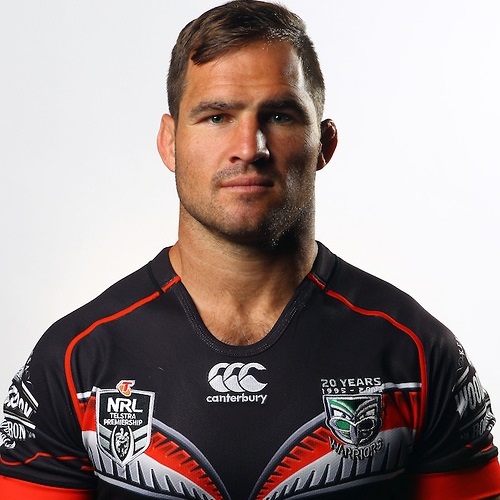 Gold Coast hooker Nathan Friend will fork out $5,000 for wearing headgear featuring the logo for his personal training business.

Probably a wise move on his part. If it went unchecked by the NRL, then it's free advertising. Since they have fined him, then it's $5000 to have his business advertised in the sports page of heaps of newspapers and the NRL website.

Speaking of such, why was Stacey wearing Nikes?

He's been wearing them since the start of the season, but yeah, I wondered that myself. Also, I thought the Broncos exclusively wore nike boots, but Folau's been wearing adidas boots, and I saw him in an adidas ad the other day too.

Hmm, maybe Nike brought him off Puma? If that makes sense.

If I was an NRL player, I'd sell headgear advertising rights to some internet website for $15000, on the sly. Then I'd express remorse, plead ignorance... hope for a smaller fine ($5000ish, like Friend's) >>> $10,000 profit, and a huge jump in web traffic for that business's website. Everyone wins.

ROFL!!!!! This is soooooooooo funny, Friend should've taken a piss outside a club and copped a 2k fine, at least it would have been worth it.

THE Titans must now embark on the search for a new hooker in the wake of Nathan Friend's bombshell that he will most likely quit the club at the end of the year.

As reported exclusively in the Gold Coast Bulletin today, Friend has fielded lucrative offers from several rival NRL clubs, with the New Zealand Warriors believed to be favourites to snare his signature for 2012.

Friend is expected to make a final decision on his future as early as today.

''At this stage it looks like I may be (leaving),'' Friend told The Bulletin.

Have your say on the feedback form below
Gold Coast Titans news, photos

''I can't be certain just yet but it is looking like my future may be at a different club.

''I have had a couple of interested parties, that is why we can't make a confident decision until the end of the week.

''I still could stay but it is highly unlikely at this stage.''

The Titans will first look in-house to find his replacement, opening the door for highly-touted under-20s rake Matt Srama and fellow promising youngster Kayne Lawton to make their mark.

Riley Brown, who has filled in for Friend throughout the early rounds, also shapes as viable option.

Chances are the departure of 80-minute player Friend will mean a change in the Gold Coast's style of play.

Your Say
"Nathan Friend is one of most consistantly strong players .... Why would the Titans be foolish enough to let him go? We need him!"
Queenslander too
The Titans will next year have to look at using two hookers, with one sharing the load off the bench, at least until one of the younger players develops enough to fill the void.

Crowd favourite Friend has been the beating heart of the Titans for the past few seasons and news of his departure is sure to upset the club's legion of fans.

Friend said he had a responsibility to make the decision that was best for his family wife Kelly and young sons Axel and Oliver.

''But obviously my career is nearing the end. It is time I received the rewards for the effort I have put in over the years.

''You have only got a short time at the top, so I have got to make the most of it.

''I don't mean to stand on people's toes but I have to do the best thing for my family at this stage in life.''

Titans managing director Michael Searle conceded the club had all but resigned itself to the fact Friend would be moving on.

''There was always going to be life after Nathan Friend at some stage,'' Searle said.

''If it is now, it is now and good luck to him. If he is doing this for his family, I don't have any issue with that.

''They are tough decisions you have got to make. Irrespective of where he goes, I don't know where it will be, the club will wish him the best.

''I have got no doubt he will continue to play his football hard and fast for us. He is a competitor.''
Click to expand...

Would be a pretty huge signing for us if true, he's getting up in age but was killing it last year. Big heart in defense so between him and Luck the rest of the team would only have to make about 3 tackles...lol

I heard Berrigan on Radio Sport today confirm that he need to play 20 games this season for his deal for next year to take effect.

If Berrigan is re-signed and we get Friend, what does this mean for Hohaia's chances of being re-signed?

Confirmation tonight Nathan Friend has agreed to terms with the Warriors and will finish his NRL career across the ditch.
His poaching to be trumpeted by the New Zealand side on Monday.
Friend had been chasing a 60 thousand dollar contract upgrade to stay at the Titans, but the club was only willing to improve his current deal by 10 grand.
Click to expand...

Looks like it's a done deal now...Massive signing imo. Friend is one of the top hookers in the game and will make our halves look better than they are next year. Will be a good situation for Johnson/Godinet to come into as well (good service will make the transition to FG easier)

I've seen people question his age & even refer to him as a journeyman! They are out of their mind. This guy is all class, his age may make a difference eventually but for a few years we'll actually have a classy hooker. An area we havn't had some class in for a while. Perfect role modle to introduce & ease Johnson/Pita into first grade.

Agree with everyone else, a very nice signing

I've seen people question his age & even refer to him as a journeyman! They are out of their mind. This guy is all class, his age may make a difference eventually but for a few years we'll actually have a classy hooker. An area we havn't had some class in for a while. Perfect role modle to introduce & ease Johnson/Pita into first grade.
Click to expand...

Talking about the retards on LU? Honestly, they're just looking for a reason to bitch if they don't like this signing. Admittedly our "name" buys usually end up being duds, but the way Friend plays at the moment, you'd have to rate him a good buy.

I think he's got a good 3 years left in him. I've heard he's an absolute health FREAK. Eg no carbs after lunch time kind of freak. Plus he's had no major injuries which has to be a good thing. Strikes me as the type that will keep on going for ages, like Steve Menzies.

Only concern is where Mara fits into plans now.

Satistically he matches up with any hooker.

I mentioned the health freak thing over at LU, and tbh I'm shocked at the negative side of the arguement, which includes us already having too many hookers. I assumed most of that arguement came from people who can't remember far enough back to the days when hooker was a specialist position and it wasn't ok to shunt any failed half into hooker.

Friend has only been a first grade regular for the last few seasons so his body doesn't have the wear and tear compared to someone who has been a starter for 8+ seasons.

Yes he's a health freak, no fast food or carbs after noon. What surprises me about the signing is that he was in the process of opening up his own personal training business (he's qualified for it too). Maybe that's on hold now.

Is defensively strong, but his offense doesn't get the credit he deserves. Does a lot of running out of dummy half and passing before the line that allows support players to get on a role and isolate defenders rather than being gang tackled. Does the smart things that don't get counted on the stat sheet.

Definitely a huge signing. But it would have to be a swap for Berrigan in my opinion. I don't trust that nbntv site, it doesn't seem legit. So still waiting for conformation, but I'm definitely happy we are in the frame.

Go to one minute in.

For some reason, that comment reminded me of this image. Haha.

Like the signing of Friend.... 3years at 1mil for an over 30 hooker seems abit over the top though,but you do have to overpay a ton too get player over the ditch

Stoked it will be the end of Heremud.....feel for Mara though who has been dicked around by the club

Good to be back. Now time to rant! I posted this at another forum:

I dont get the Nathan Friend signing when the Warriors have young guns Pita Godine and Alehana Mara who have shown they can step up to first grade. Also Lance can now go back to his super sub role and come out and play hooker. This comes across more of a luxury signing then signing for a need position.

Oh and theres Berrigan if hes there next year.

Good to be back. Now time to rant! I posted this at another forum:

I dont get the Nathan Friend signing when the Warriors have young guns Pita Godine and Alehana Mara who have shown they can step up to first grade. Also Lance can now go back to his super sub role and come out and play hooker. This comes across more of a luxury signing then signing for a need position.

Oh and theres Berrigan if hes there next year.
Click to expand...

Mara has had 3 20 minute bursts and Godinet hasn't made his debut, hardly a sign that they've shown they can step up on a consistent basis.

I'd love for Mara to get a go, and I don't see any reason why he couldn't even with Friend on board. Godinet I believe needs to focus more on the halves. Wouldn't mind seeing a Godinet/Johnson combo if Maloney decides to head back to Sydney when his contract finishes.
Show hidden low quality content
Share:
Share