Contributor
Excellent Rizzah, these are brilliant. Luckie will really appreciate this.

Certainly interested in ordering one myself when its all sorted ta very much.

Contributor
Micheal, Every team needs abit of Luck and we were lucky to have you as part of ours, sorry we couldn't send you out a winner but you will always be a winner at this Club, all the best for your future to your family from mine. Cheers Chris, Jen & Family This was sent out a few days ago, I assume most people on here would have received the email. Either way I'd assume the tickets are gone, when I enquired 2 days ago I was told 'there are still a few'. Anyone going?

ToiletDuck said:
This was sent out a few days ago, I assume most people on here would have received the email. Either way I'd assume the tickets are gone, when I enquired 2 days ago I was told 'there are still a few'. Anyone going?
Click to expand...


I am going.As I work in the Auckland CBD it's only a 5 minute walk for me to SkyCity. I do have one ticket spare as a mate had to pull out if someone is interested in it.Hopefully we will know if we have a coach or not by the time this event comes around 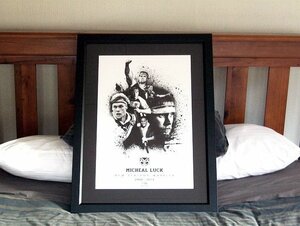 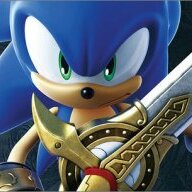 Damn any chance I can get a copy of that print?

Robster said:
Damn any chance I can get a copy of that print?
Click to expand...

Yeah sure, PM me your address.

ToiletDuck said:
Robster yep he got it mate. Here's a look at the final product. Final size 560mm X 740mm.

Thats sick! Glad he liked it. We some loyal as fans man....

Message from ToniLee: A huge thank-you to the NZ Warriors Fans for arranging this farewell gift for my husband. He absolutely loved it - his success in Rugby League is due to the amazing support he received from the dedicated fans in both New Zealand and in Australia. We are back home in Townsville now - enjoying being close to family, but miss our second home - it will always hold a special place in both our hearts.

A special shout out to Rizzah who designed the poster and also a tribute book for Micheal. To the fans who wrote letters for the book - thank-you from the bottom of my heart. It is something he will treasure for a lifetime - he often sits down with a beer to read through it - will post photo's soon! 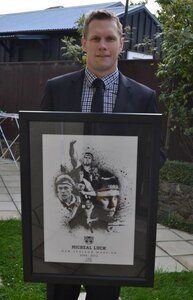 Yeah Rizzah, you should be mighty proud bro!
So should all the admins of this, and the previous site, for all the farewells & tributes you have organised over the years.
Makes me fiercely proud to be a member.
Reactions: Moz, ShaunJohnson7, KPWarrior and 3 others 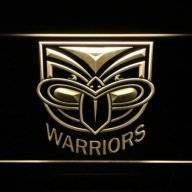 Contributor
This is the kinda stuff that makes this site (and Warriors fans in general) just a cut above the rest. Well done!
Reactions: Vancent, asdf, ShaunJohnson7 and 3 others

Contributor
Thanks to all that made this happen on our behalf. Amazing talent Rizzah
Reactions: mt.wellington and ShaunJohnson7 ToiletDuck said:
Robster yep he got it mate. Here's a look at the final product. Final size 560mm X 740mm.

113 Matt Jobson - ??? 2008 QLD Cup Easts Tigers Managed to track him down. Working as a valuer at LMW Hegney, Gold Coast, Australia. Below is his LinkedIn profile and what LMW are all about... https://www.linkedin.com/pub/matthew-jobson/31/b44/ab8 https://www.lmwhegney.com.au/home/w6/i2/

Our last update Micheal Luck was working as the North Queensland Cowboys’ Manager of Recruitment and Development.

He is still working with the Cowboys but has moved up a couple of notches to General Manager of Football. 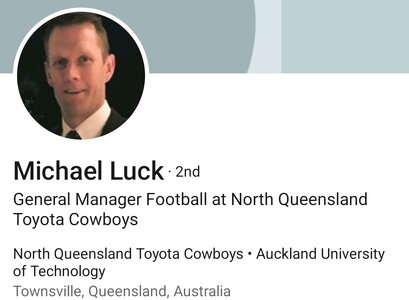 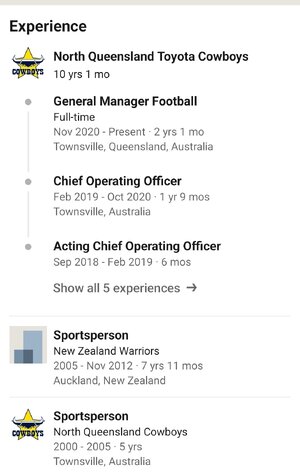 Today the North Queensland Toyota Cowboys announced the appointment of Micheal Luck, the club’s current Chief Operating Officer, to the role of Head of Football. After a short period of transition between roles, Luck will assume full-time responsibilities for the club’s football department from the end of the year.

In announcing Luck’s new role, CEO Jeff Reibel said the club had looked to one of their own, whose relentlessness, tenacity and counsel had been so vital in such a challenging year, to lead the football department through this pivotal period of change.

“In his role as Head of Football, Micheal will bring continuity, stability and history as we embark upon a new era. It gives me great pleasure to appoint a highly respected and credentialled sports administrator to run our football operations who is also able to impart the knowledge of what it means to be a Cowboy and belong to a club that is so fundamentally interwoven with the North Queensland community,” he said.

Reibel also said that Luck’s experience, aptitude and approach in working on both sides of the business, both football and administration, would allow him to navigate the commercial and operational complexities in running the club’s football department seamlessly.

“Micheal’s early career at the Cowboys was in the football department as the Elite Pathways Manager and then he moved over to the administrative side when he took on the position of General Manager – HR. Following that, he was appointed the broader role of Chief Operating Officer with oversight of the club’s football, commercial, membership and brand departments.

“Having successfully overseen the migration of game day operations from 1300SMILES Stadium to Queensland Country Bank Stadium, and ensured the administrative performance of the club continues to achieve top four status amongst its NRL peers, Micheal has now been given the task of spearheading the re-generation of the club’s football department in conjunction with new Head Coach Todd Payten.”

Luck said it was a privilege to be asked to take direct responsibility for the club’s football department including management of the NRL, coaching, performance, medical and pathways teams, and he would rely on the 20 years of experience he had garnered both on and off the field in performing his new duties.

“I am excited for the opportunity to shape the club’s football program from the ground up, utilising the insights, understandings and skillset gained from playing NRL for 12 seasons and working in club-land for an additional eight,” he said.

“What I love about working in football is the clarity and accountability that comes from having to produce an outcome week-in, week-out. I’m excited to stretch my skills across every aspect of our football operations and build a sustainably-successful football program.

“I’m also looking forward to furthering our club’s foundational vision of being a beacon of hope for the North Queensland community and a place for home-grown talent to fulfill their professional rugby league aspirations. While we will continue to welcome players from across the country, I am committed to identifying, nurturing and supporting those who have grown up in North Queensland.” 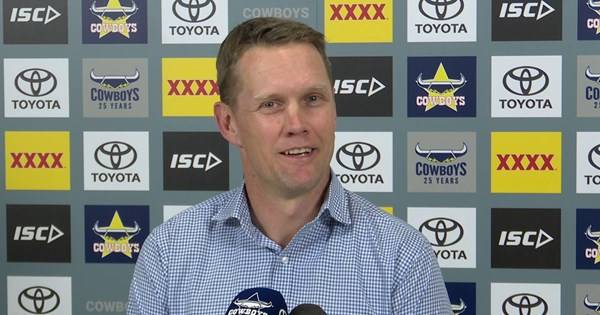 Today the North Queensland Toyota Cowboys announced the appointment of Micheal Luck, the club’s current Chief Operating Officer, to the role of Head of Football. After a short period of transition between roles, Luck will assume full-time responsibilities for the club’s football department from...