After a week off with the bye both the Sea Eagles and Warriors will embark on one of the longest trips in rugby league this week, meeting at nib Stadium in Perth.

The Round 19 Manly home game sees the seventh-placed Warriors look to further establish themselves in the top eight, while for the 13th-placed Sea Eagles must-win territory is approaching if they want to play post-season footy in 2016.

Manly coach Trent Barrett has called Matt Wright and Lewis Brown in to line up in the centres in the place of Dylan Walker (hand) and Brayden Wiliame (suspension), while Bradley Parker will debut on the wing.

Both Blake Leary and Siosaia Vave are named on a five-man bench.

This week the Warriors welcome back captain Ryan Hoffman and veteran wing Manu Vatuvei – who between them boast 495 NRL Telstra Premiership games – replacing Albert Vete (hamstring) and Nathaniel Roache, who drops back to the club's reserve-grade side.

Tuimoala Lolohea shifts from the wing to the bench while James Gavet is named at 18th man.

Watch out Sea Eagles: Between Rounds 4-19 this year Manly have beaten a top-eight side only once (tasting victory against the Dragons in Round 17). Other than that the Sea Eagles have only been able to get over the top of teams who at the time sat outside of the top eight, beating the Warriors in Round 6 and Knights in Round 8.

The Warriors showed no signs of being sluggish out of the bye earlier this year, producing arguably their best performance of the year in a comprehensive 36-18 victory over the Broncos in Round 13. The week off can often do more harm than good to a team's momentum, but for the Warriors it may prove to be a huge positive ahead of a taxing away trip.

Watch out Warriors: Manly have enough points in them to win games in the NRL, it's only stopping them at the other end which is tripping them up. Across the season the Sea Eagles have averaged 19 points scored per game, while over the past month they have scored at least 24 in all but one game.

Be aware as well of the Warriors' second-half fade. In three or their last four trips to Perth the Warriors have led at half-time but gone on to lose on each occasion. Whether it's due to the effects of a long road trip, or something unrelated, the Kiwi side have a history of falling away in games played in Western Australia.

Key match-up: Tom Trbojevic v David Fusitua. Two excitement machines at the back of the field who chew up yardage for fun. In a season where he has played mostly as a winger or centre so far, Trbojevic is averaging 160.9 metres with nine line breaks and five tries. Fusitu'a has also had only limited time as a fullback this year, but has scored seven tries in just 10 games, while averaging 138.7 metres with 10 line breaks. These two players are sure to get the fans on their feet in Perth.

The history: Played 28; Sea Eagles 20, Warriors 8. The Sea Eagles' recent head-to-head history against the Warriors is excellent, with 10 wins from their last 11 clashes. If you go back even further Manly have lost only four from their last 21 against the Kiwi side, dating back to 2004. The reading gets even worse for the Warriors ahead of Saturday night, having not won a single game in Perth in seven attempts.

What are the odds: The Sea Eagles opened as outsiders with Sportsbet but they could well be favourites by the time the game kicks off due to five times the investment on Manly in the head-to-head market. The home side 1-12 is the way punters are going in the correct margin market.

How we see it: The Sea Eagles have lost seven of their last eight, while the Warriors are riding a wave of good form with only three defeats in that same period. Momentum is firmly on the side of the Kiwi outfit, but while some venue hoodoos can be dispelled as pure coincidence, there is genuine reason behind this one and the Warriors haven't been able to get past it so far. Manly to finish stronger and win by two. 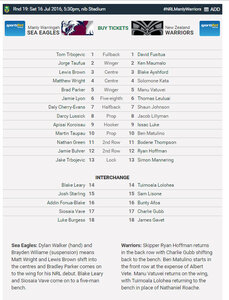 There is no other team I enjoy watching the Warriors beat more than Manly, and that hasn't happened often enough unfortunately.
Lets put the Sea Eagles finals hopes out of reach for the season with a win at Perth.
Go the Warriors!!!
Reactions: Johnnyray, kabkram, Marley and 4 others

NZWarriors.com said:
How we see it: The Sea Eagles have lost seven of their last eight, while the Warriors are riding a wave of good form with only three defeats in that same period. Momentum is firmly on the side of the Kiwi outfit, but while some venue hoodoos can be dispelled as pure coincidence, there is genuine reason behind this one and the Warriors haven't been able to get past it so far. Manly to finish stronger and win by two.
Click to expand...

Great comment, I hope Cappy makes some use of it. This side is a lot fitter than people think.
Expand signature
Trainspotter

With Lillyman and Thompson out Luke will have to be on song today. Manly will try and bully the young guys. It is an opportunity for the young blokes to show they belong at this level.

Manly will make it as brutal as possible, Myles and Buhrer will put the shit in as they have to win the middle and ruck. If our guys execute the fundamentals and are accurate in what they do they should have too much fire power.

Like any game, hold possession, do the basics, work hard.
Reactions: Freddie Futler

Give Gavet some angry pills. We must win the ruck and penalty count cos if they spend a lot of time down our end I fear we will see a few tries past the twin beasts
Reactions: Old Sid and Matulino's Left Shoulder

Lisone needs to be a maniac on attack... But keep the bro calm on defense no sitting back and no rushing out

With Badger and Chris James we will get a fair go for a nice change(they aren't part of the Checchin/Maxwell/Sutton/Atkins/Klein gang) and because of that if we do the basics well we will be too good for Manly despite our piss poor record against them overall.Chance today to kill two more bogeys this season.....Perth and Manly.
Play well as we should/ can for the rest of the season and we can make the top four.Go Warriors!!!!
Reactions: Brother Faisal and Matulino's Left Shoulder

Badger gets a pass because of Mrs Badger
Reactions: Akkerz and Inruin

Manly worry me, always have though. But Manly supporters will be more worried about us. My head feels confident about this game. Even though Manly are in the bottom 8, this game will give us a clear indication of our final chances.
Let's hurt them with committed defence, minimal errors, and then attack after we have laid a very solid foundation. First 10 minutes being the key for me.
GO THE MIGHTY WARRIORS..

Manly is lower on the table than us, their team is in disarray, and they have lost more key players than us. What's the problem?

Its the warriors....
Reactions: davewjnz, Dunedin warrior, danyooll and 4 others

Manly have the bigger Pack and the bigger bench but we've managed to hold our own in that department these past few games, much will depend on our back three getting us forward and providing quick play the balls for Issac to work from.

Cappy has a plan for Ken & Manu to work together so I expect to see extra carry's out of those guy's working in tandem.

Hadyn said:
With Badger and Chris James we will get a fair go for a nice change(they aren't part of the Checchin/Maxwell/Sutton/Atkins/Klein gang)
Click to expand...

Fark them all.
Bring back Neville Kesha!!
Reactions: Sup42 and Freddie Futler

Wonder if the Dragons were saying the exact same thing before they got pumped by 30 odd points.
Reactions: Jay M

Never underestimate Manly.
Lyon alone has made us look like retards.
Reactions: eric, 6 Again, Jay M and 1 other person

I have a bad feeling about the game tonight...
Reactions: eric