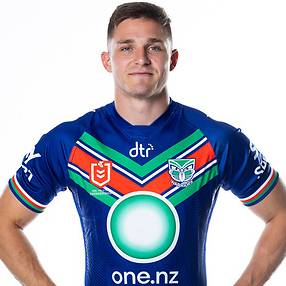 Signing formalities have been completed for Cronulla-Sutherland rookie Luke Metcalf to join the Vodafone Warriors for the 2023 and 2024 NRL seasons.

The 22-year-old, off contract with the Sharks at the end of the 2022 season, made his NRL debut this year while he was still on a development contract.

His first outing was against his former club Manly Warringah in round 20 when he came into the Cronulla squad after returning Vodafone Warriors favourite Shaun Johnson was ruled out for the last six rounds of the regular season.

“Luke was really impressive when he came into the NRL late in the season,” said Vodafone Warriors head coach Nathan Brown.

“He had to wait for his chance after seeing next to no football in 2020 because of Covid but he showed just why he has been so highly regarded coming through the grades with both the Sharks and Manly.”

Metcalf’s second appearance was against the Vodafone Warriors, when he was used off the interchange for only the last three minutes of a contest his side lost 16-18.

In his fourth game, he was a standout scoring two tries, creating another and making 124 metres in Cronulla’s 50-20 win over the Wests Tigers.

“He has been on our radar for some time and will add huge value to our club from 2023.”

After coming through the age grades with the Sharks, Metcalf was with Manly Warringah in 2018, 2019 and 2020 before returning to Cronulla this year.

An ACL knee injury ruined his 2019 season before he returned to represent Manly at the NRL Nines in Perth only to then be reduced to spending the Covid-impacted 2020 campaign in a training-only role.

Throughout his career Metcalf has stood out as a strike weapon. Able to play at fullback as well as in the halves, he represented New South Wales at both under-16 and under-18 level during an outstanding junior career which included him scoring 19 tries and kicking 61 goals in just 21 games for Cronulla’s S G Ball Cup under-18 side in 2016 and 2017. In all games at all levels from under-16s up he has a total of 63 tries in 89 matches.

Vodafone Warriors make another signing for 2023 and beyond - Sharks rookie Luke Metcalf.

www.warriors.kiwi
Reactions: Zarjaz and The Falcon

I was watching him a bit yesterday. He was doing a bit off the ball, getting people in position and support play.

Can't have that here at the Warriors. His team mates will soon get that out of him.
Reactions: ndp26, francis, Up the guttz and 4 others

Only played 20 minutes.
The latest great white hope has arrived.
Click to expand...

Webby-wan will teach him how to use his gifts, the Warriors will rise again, use the Force Luke.
Reactions: Horriors2013, CHURCUZ, J_P and 5 others

The lad certainly has wheels and will be pushing for a first grade position.
It's up to Webster to work out his best position in the team, a small Ray of hope for next year.
Reactions: TheMorningEmu, francis, Up the guttz and 4 others
Show hidden low quality content
Share:
Share