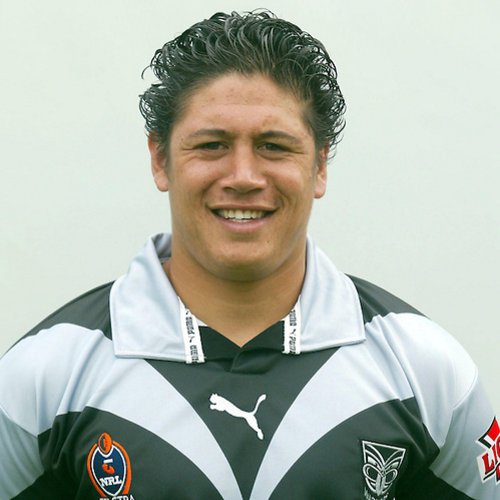 ​
Jeremiah Pai left the Warriors at the end of 2003 after signing mid-year with the Eels. Played hooker, standoff and lock for the Eels PL team throughout 2004 before being cut, and signed with Melbourne. Has since been in Queensland Cup with Melbourne feeder Brisbane Norths, mainly at standoff. Not really playing well enough to warrant a first grade callup.
Last edited by a moderator: Nov 16, 2022

Remember, in the Vulcans standing out at times are players like Jeremiah Pai who played one or two games of first grade and my lasting memory of Jeremiah is that he could barely pass the ball left to right, and he was playing dummy half!

The Warriors have lifted their sights up the NRL ladder after a comprehensive 26-10 dismantling of the Eels yesterday.

They are aiming for first or second place, and after yesterday's effort at Ericsson Stadium that looks a decided possibility.

"I think we can really start preparing for the playoffs now, tune up various aspects of our game," said coach Daniel Anderson, dismissing talk that they were settled on fourth place of 15.

"The higher you finish the better the advantage."

The team looked superbly relaxed yesterday, with the previous week's bye obviously having refreshed them.

The time they had to do things against the Eels was a clear indication of sharpness both on attack and defence.

Everything the visitors tried was shut down.

The Eels cost themselves with early errors and penalties as they tried to slow the pace. Their kicking game was too shallow and they paid dearly as the home side enjoyed the glut of territory and possession.

The Warriors went hell-for-leather through the first 40 minutes and produced one of the best halves of football they have ever played.

The attack was flatter, the passing slicker and quicker and the execution absolutely spot-on as they took an 18-0 lead before the break.

It could have been much more. Twice Stacey Jones found John Carlaw with his bomb, but the centre was stopped inside the last metre.

Three times Ali Lauiti'iti produced huge line-breaks down the Eels' right side, scoring himself off the first, attracting the whole right-side defence for the second and stopped centimetres short.

When he repeated the trick, the ball was worked quickly back to the middle for Richard Villasanti to cross.

The Warriors wilted somewhat in the second spell, letting in two touchdowns. Eels captain Nathan Cayless claimed that was more to do with a lift from his side.

But he admitted they had been bashed up front and outclassed out back.

The Eels were depleted before they flew over, with internationals David Vaealiki, Jamie Lyon and Michael Vella and Origin players Adam Dykes and Michael Buettner out through a combination of injury or suspension.

They made four late changes, with Ashley Graham making his debut and this season's rookie Jamie Russo at five-eighth, but neither Cayless nor his coach, Brian Smith, used that as an excuse.

The Warriors blooded 20-year-old back rower Jeremiah Pai from the Eastern Tornadoes and he was solid in the tackle, as was Vince Anderson on the right wing in his third game.

The match was won up front, with Jerry Seuseu and Lauiti'iti tireless carters of the ball and Awen Guttenbeil and Kevin Campion holding the defensive line around the ruck.

Those worried about the loss of fullback Ivan Cleary can rest easier after the showing by Brent Webb as fill-in.

He was safe under the high ball, and a couple of minor positional lapses on defence were more than balanced by scintillating attack. His confidence is clearly high judging by the number of times he took the ball to the line.

It will be harder to replace Cleary's goal-kicking accuracy. He nailed five straight yesterday to set a new season's points record for the club at 178 and beating his own 163 last season. Cleary holds the NRL all-time record with 284 scored for the Roosters in 1998 and that is not looking out of reach with as many as 10 games left.

The NRLs demotion of top ref Bill Harrigan after a mediocre effort does not appear to have done much for the confidence of the others if yesterday's performance is anything to judge by.

Paul Simpkins and his touch judges were unable to rule on Lauiti'iti's try, nor to rule out one claimed by Eels centre Matthew Petersen.

There were no injuries yesterday and the Warriors will go to Canberra next weekend in good shape, according to the coach.

The Eels host second-placed Brisbane, and the leaders, the Bulldogs, go to play Newcastle, with the results in those games aiding the Warriors' cause regardless who wins.

By PETER JESSUP and NZPA
3 September 2002

The NRL last night gave the New Zealand Warriors the all-clear to stand down a clutch of players for their game against Wests Tigers at Ericsson Stadium on Friday night.

After the Warriors lost to the Northern Eagles on Sunday, coach Daniel Anderson said he would be resting some of his players for the final-round match because "our main focus is the home semifinal."

NRL chief executive David Gallop responded by reminding clubs that they had a contractual obligation to field their best available team.

Prop Richard Villasanti is back after a month out with a knee injury. Fellow prop Iafeta Palea'aesina and back utility David Myles return from the national domestic competition, the Bartercard Cup. Jeremiah Pai gets his second run and first start at hooker.

101 Jeremiah Pai - Played in the 2013 Pt Chev Pirates team in Aucklands Fox Memorial Not sure on what he's doing work wise but he played for the Pirates again this year. This is a pic of him playing in the ARL Fox Memorial Grand Final which the Pirates won...

All we knew about Jeremiah in our last update was that he was playing league for the Pt Chev Pirates in the Auckland Fox Memorial competition. Now we have even less because he is no longer playing and we still dont know where he is working.