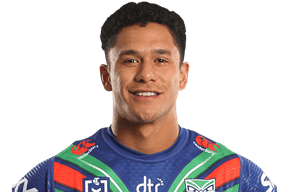 Plenty of talent but no obvious position is his biggest problem. Expectations are massive. Locking down a position and playing another season in NSW Cup will do him wonders and we will get a better idea where he’s at.
Reactions: Defence, YeahNah 4020 and matiunz

The issue he’s got is like Abbey and CNK before him is that his best position is fullback. This obviously will be Roger Tuivasa-Sheck’s as long as he wants it.

Seemed to struggle a bit last season in other positions but hopefully has a breakthrough season this year. Has genuine speed which we desperately need.
Reactions: mt.wellington, Defence, warriors55 and 3 others

Didn’t someone say he was going to rugby?​

In the first grade games he played this he was decent. Not enough time to judge. Needs to be given a shot if not he’s better off in Union or somewhere else.
Reactions: warriors55

bangbros18 said:
Yeah this is an interesting player to watch this year. Is he going to be another CNK? It would be a shame for him to leave without a bunch of games, but honestly where do you play him? Can he command a bench role?
Click to expand...

You shop Kodi as hes absolute rubbish and you play Hayze at 6 which is his position.

He cant play any worse than Kodi.

Losing Shaun Johnson and signing Kodi really showed up how under appreciated Shaun Johnson was. Sure he didnt turned up inividual brilliance every game, but his ability to create confusion in the Opp D, create Draw and Pass for Peta to then Pass to Fusitua, his general duties as a half (should always have been a 6 not 7) is now obvious with Kodi being like hes playing in 3 seconds in the past he is so obvious with his offense play.

If Hayze is not as good as Shaun Johnson and Roger Tuivasa-Sheck think he is, then its easy, you put Kodi back at 6 until we find a quality 5/8th. But I think hes better than people think. He didnt get selected for 1st grade because he has no talent. He just hasnt had enough game time. And blaming our reserve grade on Hayze or saying he didnt play well is not a reflection of how good he is. Only playing 1st grade will reveal that. just like CNK.
Reactions: Off The Bench, Worried2Death and marv

WellingtonOrca said:
Hayze was pretty poor in reserve grade when I saw him play as a centre or as a half. Not really sure where he'll end up.
Click to expand...

playdaball said:
Didn’t someone say he was going to rugby?​
Click to expand...

No. He came from rugby. He's signed to us.

Hayze Perham has re-signed with the club till the end of the 2021 season.
Last edited: Nov 29, 2019
Reactions: fizurg, MurrayTD, Hazman and 11 others

What they do with him will be interesting.

I just don't see him fitting into our spine anytime soon.

Wing/centre are his obvious options where he didn't impress in ISP when put there.

Hope he gets game time

Thats his position, thats where Shaun Johnson and Roger Tuivasa-Sheck saw him and said look out for this fulla. Make of it what you will. The Henare Wells case is a bit perplexing. Im wondering if he was sold the, yes we have player development and a chance at first grade BULLST that CNK was who luckily got out of the club before the club killed an elite players career due to SK and I do wonder now we have crap u21 coaches prior to the back to back to back premiership years, if they actually talk to SK and say, hey this guy is good, play him, no dont think about it SK we know that means you are ready for your afternoon snooze.

Where is he at? Shaun Johnson and Roger Tuivasa-Sheck BOTH said he was the next big thing, hes fast and hes a big 5/8th, but can he draw and pass etc?

Him and Chanel Harris-Tavita the future (2022~) with Kodi taking his money and going to SL?
Reactions: Off The Bench

IMO his best spot is fullback, but good luck getting a run there.

Having said that he was very solid at centre in the game he played. Maybe just needs proper time in the spot.
Reactions: Hazman, Tragic, fizurg and 2 others

He's starting at fullback for Para this week with Gutho getting a rest
Reactions: kos, Five&Last, Viking and 5 others
Show hidden low quality content
Share:
Share

General Back The Boys!
2