Don't ever see the Titans doing a Chargers, Seagulls, Vikings or Dolphins retro jersey. Apart from the Dolphins failed name the current Gold Coast team have absolutely nothing to do with the other teams. Completely different clubs, bids and ventures...
Reactions: Hazman, Defence and matiunz

Hung out with Wes Patten a few times back in the 90’s when he was playing for the Chargers and scored one of their player jerseys.
Just couldn’t bring myself to wear it out in public!

Ended up losing it somewhere through the years.
Has to be one of the oddest jersey designs in Rugby League history. Hahaha

matiunz said:
The chargers one is a bit of an eyesore , the old giants one isn’t too bad for a retro

I always did like the Giants jersey.
There’s a guy selling some original Giants gear on Gumtree over here. Pretty rare.

That Seagulls jersey, well the gear in general have a bit of an NFL vibe to it.

Those old jerseys with the 3/4 sleeves used to be pretty cool back in the day.
Reactions: Hazman and Off The Bench

As for James Roberts, I wouldn't take him back if I were the Titans. He weaseled his way out of his contract.

As for James Roberts, I wouldn't take him back if I were the Titans. He weaseled his way out of his contract.
Click to expand...

I thought his contract was the one the club got caught forging after he signed it? I wouldn’t stick around if that was happening to me.

fizurg said:
I thought his contract was the one the club got caught forging after he signed it? I wouldn’t stick around if that was happening to me.
Click to expand...

He wanted out, so got a lawyer to look through his contract and find any kind of loophole.

They had initialled some pages on his behalf, which I'm sure is probably pretty common.
Reactions: fizurg

razzrillinger said:
He wanted out, so got a lawyer to look through his contract and find any kind of loophole.

They had initialled some pages on his behalf, which I'm sure is probably pretty common.
Click to expand...

I can’t imagine the club changing your contract then forging your signature on it would be that common?

fizurg said:
I can’t imagine the club changing your contract then forging your signature on it would be that common?
Click to expand...

I think he should have shown more loyalty to the Titans and if they take him back on a big wage then more fool them I guess.

razzrillinger said:
I think he should have shown more loyalty to the Titans and if they take him back on a big wage then more fool them I guess.
Click to expand...

I think loyalty is a two way street and forging a contract you have signed with an employee so that you don’t have to pay them as much as you agreed on doesn’t scream loyalty to me.

Article about Big Mal's appointment to the Titans.

A positive article that paints the picture that the Titans are on the cusp of something. Have to wait and see as this time of year there are positive articles about every club.

With Big Mal on board, the Titans are on the crest of a wave

It says a good deal about the importance of "culture" in a professional sporting organisation that Mal Meninga could be the best signing the Gold Coast Titans ever made (tip of the hat to pioneers like Scott Prince and Luke Bailey, of course).

During the week, the current Kangaroos coach was announced as the "head of performance and culture" at the NRL club. It sounds like a position created for a man of Meninga's particular skillset, given his influence on state and national teams over the past decade.

My way: Mal Meninga could be the man to wake the NRL's sleeping giants.CREDIT:AAP

If there was one thing Meninga detested during his tenure as Morons State of Origin coach, it was the suggestion that he was a figurehead only, leaving the real coaching to astute football men like assistant Neil Henry.

He was right to protest against the notion, but the sledge was always part back-handed compliment; Meninga had a wondrous way of getting every inch of ability from the players under his watch. Now all he has to do is make that work in one of the great basket-case regions of Australian sport.

It was a move completed with the blessing of Todd Greenberg and the NRL, who have invested heavily in the Titans and want to ensure that the club succeeds. With Meninga on hand, they now have a man at the top of the mountain who commands the kind of respect few in rugby league can match.

“I can feel there is something special building at the Titans,” Meninga said of his appointment. He's right too and, if anything, being overly cautious. The Titans are the sleeping giants of the NRL.

Yet in the meantime, no other code has been able to cash in on the vacuum. The A-League arrived via Clive Palmer's helicopter and departed in the back of a clapped-out Commodore. The Gold Coast Suns spend most of their time convincing players not to leave, despite the excellent weather and lovely beaches and increasingly good array of coffee ventures. Last year, they won four games.


Now there are signs that the Titans, who only a few years ago were the subject of an NRL bail-out amid suggestions they be moved to Perth or Gosford or anywhere else but this sporting black hole, are not only on the mend but on the rise.

Former chief executive Graham Annesley (now back with the NRL) did a good job to steady the ship, even if every time his phone rang for a while it seemed as if another player was being handed a court date or attempting to escape a contract.

Another savvy addition has been that of Dennis Watt as executive chairman of the club's new board. Watt was the long-serving chair of the Broncos, the mega-club down the other end of the M1, and came to the Titans from a culture of winning. He remains one of the best-connected operators in the code.

For so long, nothing has made much sense about Gold Coast football. Recruitment was haphazard, links with local clubs were lacking and fans were, well, they did what Gold Coast fans always tend to do, which was come for a look when the team was winning and hit the beach when it wasn't.


Now the club has a training base that rates among the best in the competition, which is nowhere near the "Glitter Strip" that seems to accompany every story about the Titans. It has a promising second-year coach in Garth Brennan and, finally, a top-shelf player from Sydney has signed and deal and actually turned up to play. Well done, Tyrone Peachey.

More importantly, the Titans are now operating in one of the most fertile recruiting environments in Australian sport. The club straddles the area south of Brisbane, which churns out players from its large Pacific Island comminity, and the northern reaches of NSW.

The past two winners of the GIO Cup, which crowns the best schoolboy side in the nation, have both been from the region. Keebra Park, a veritable NRL factory, took it out in 2017 and were one of the favourites again this year, only to see Palm Beach-Currumbin hoist the silverware.

Their list doesn't suggest a premiership in the next season or two but don't underestimate the value of an immense presence like Meninga at the club. Players who even consider stepping out of line should be righly petrified of being hauled into his office, and he could be the difference between getting a gun player over the line or having them back out at the last moment.

Who says no to Big Mal?

WHAT THE HELL, I THOUGH WE WERE THE SLEEPING GIANTS.
My way: Mal Meninga could be the man to wake the NRL's sleeping giants.CREDIT:AAP
Toggle signature
Kiwi @ Heart, Aussie By Need.
One Team One Dream

Titans 2019 away and heritage jerseys

Happened across a titans training today and they were playing a full contact 13 a side game and they were looking sharp- I can definitely see them improving this year.
Stand out for me was Brian Kelly who was unstoppable at center- he's got a wicked stop and go- sooo fast off the mark and a young islander prop (think it was fotuaika) who was playing on the weaker side (seemed like a probables v possibles type set up) but he was giving it to Boyd and Wallace. He's one to watch out for.
Reactions: Weno, Murraytd, snake77 and 5 others

This is a cruel blow for the Titans. 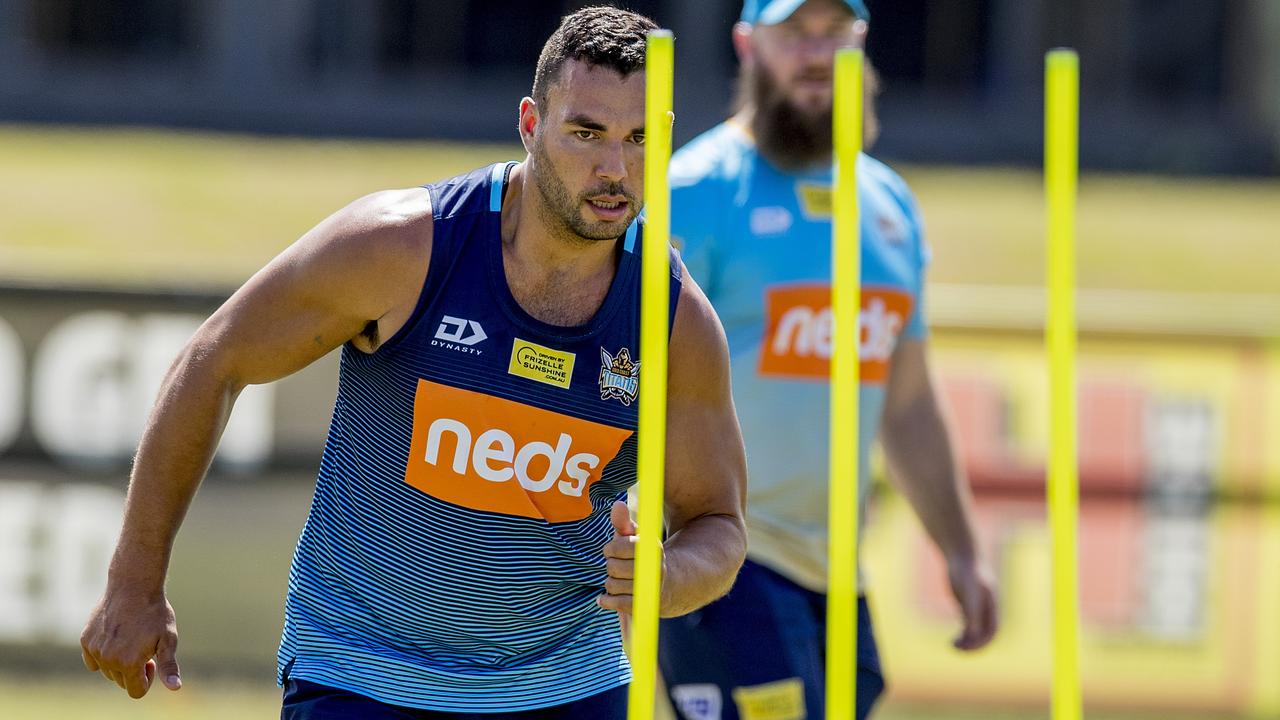