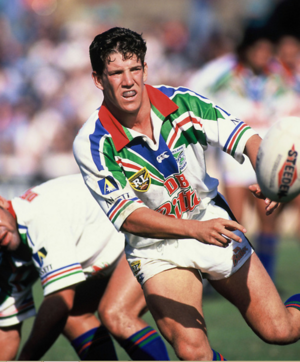 Born in Auckland on January 27, 1974, Ngamu played for Marist and Northcote in Auckland before being signed by Manly, then coached by Graham Lowe, in 1992. He made his first-grade debut and nine appearances in all in 1992 and 1993, signed with the Warriors and then spent 1994 with South Sydney before returning home. Having made the Kiwis in 1993, he established himself with the Warriors from the outset going on to form a superb partnership with Stacey Jones; he still shares the club record for most points in a match (28). He finished with the club in 1999 to take up a contract with Huddersfield before later playing club rugby union in Sydney and club rugby league in Auckland. Ngamu is now back in Sydney where he works as a groundsman.

Still working as a greenskeeper for Green Options on the Northern Beaches of Sydney.

This from an artice that has now been deleted from the NRL site that is saved in our 2015 update thread.

Ironically, Ngamu’s career has just about brought him full circle: these days he bases himself back on Sydney’s north shore – right around Manly – where he fills his days looking after the very grounds on which he used to ply his trade.

“Yeah I’m a greenkeeper now,” he said. “I came back from the UK (after two years with Huddersfield in 1999-2000) and started doing it with my brother-in-law in NZ and ended up doing my apprenticeship back in Auckland. Eventually I moved over here and ended up working with a company called Green Options.

“I’m now the manager of our north side operations, so with winter sports we look after rugby league, rugby union, soccer, AFL, hockey fields – pretty much everything over winter – and then coming into spring it’s getting all the renovations done and then getting cricket pitches ready for the summer sports. The company I work for specialises in cricket wickets so we do Waverly, Coogee Oval, Manly Oval, Pratten Park out west, Redfern Oval and we look after Toyota Stadium as well.

“Even now I find myself driving around to various grounds all the time just to have a look and see what the other groundsmen are doing.”

“It’s funny though – when I used to play I never really thought about the grounds we played on. We used to get out there and train and kick balls 1000 times on the same spot. The groundskeeper used to come out all the time and repair divots straight away and I used to look at him funny, but now I understand exactly what he was doing.”
Click to expand...