Tomkins is back this week: 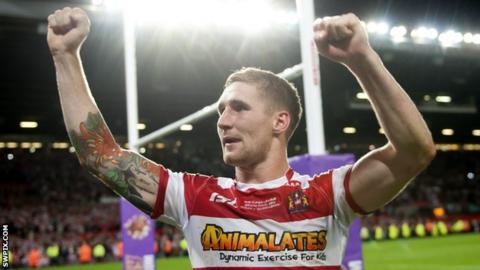 Sam Tomkins' last game for Wigan was the 2013 Grand Final win over Warrington
Wigan and England full-back Sam Tomkins has vowed not be a 'weak link' when he returns from his long-term injury.

Tomkins has not played for nine months after suffering a knee injury playing for New Zealand Warriors.

"I'm glad it's finally come to the time to get my boots on and get out there," he told BBC Radio Manchester.

"I've been training now with the boys for three or fours weeks. The last week has been full training and once you're in that and feel good it's tough to not put your hand up and play.

"The first few months were very tough - obviously when I signed back last year I didn't think I'd be sitting on the sidelines.

"It ended up doing a bit of helping out with Lewis Tierney at full-back and that gave me a bit of a focus, but the last month has flown by once I started training."

Tomkins spent two years at NRL side Warriors, but cited homesickness as one of the factors for his return to Super League.

"I'm realistic," he added. "I'm not going to be coming out on Friday and be absolutely flying and in my best form.

"It's not the case of as soon as you're fit you're in your best form, that might take a while, but I can certainly add something to the team, I'm not going to be a weak link."

The same day our season's fate has been decided a former Warrior played in a cup win. Congratulations Carlos.

Was quite refreshing watching that game. A lot of mistakes but not the usual Australian emphasis on completing sets and making yards.

The same day our season's fate has been decided a former Warrior played in a cup win. Congratulations Carlos.

Was quite refreshing watching that game. A lot of mistakes but not the usual Australian emphasis on completing sets and making yards.
Click to expand...

Proud Hull FC boss Lee Radford predicts there is more to come from his side after the Black and Whites' first Challenge Cup final win at Wembley.

Despite the Super League leaders looking set to be overturned by second-placed Warrington, Radford's side came from behind to grab a late 12-10 win.

"That's the togetherness we have in this team," he told BBC Sport.

"We have the ingredients there to go on from this. We have the foundations in place to go and achieve more."

Hull, who have already qualified for the Super League play-off semi-finals, still have to host both Warrington and third-placed Wigan, as well as visiting fourth-placed St Helens before determining who might line up at Old Trafford for the Grand Final on 8 October.

Radford added: "There's the League Leaders' Shield to still play for and then we could be only 80 minutes away from a Grand Final."

The same two goals are also still very much in the sights of Tony Smith's Warrington.

"It will go down as one of the better finals for many a year," said the Wire boss, after his club suffered their first defeat at the rebuilt Wembley and missed out on a fourth Challenge Cup victory in eight seasons.

"We'll go away and lick our wounds, but we won't sulk for too long. We're a proud club and we've still got a great opportunity to win two other trophies." 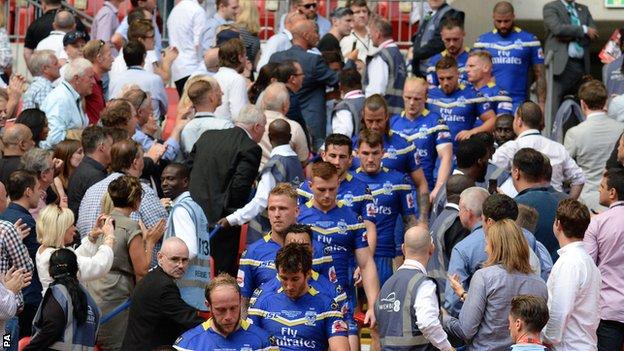 After wins in 2009, 2010 and 2012, Warrington suffered their first Challenge Cup final defeat at the rebuilt Wembley
Comeback kings
Even in a sport that is full of ups and downs in so many contests, it is an impressive statistic that Saturday's final was the 14th time that Hull have come from behind to win this season.

"It's history-making for us and we should feel rightly proud," said Radford. "There's been a lot of past Hull teams with some tremendous players who have not achieved what we have.

"And it was great for Jamie Shaul to get the winning try. He's a local lad like me, so he gets a lot of stick when we lose. But he can now go and walk his dog with pride."

Sneyd a worthy Lance Todd Trophy winner
Modest Hull scrum-half Marc Sneyd played down his own contribution to Hull FC's late rally after being named man of the match.

"I was surprised I'd won," he said, suggesting that he was expecting hooker Danny Houghton to pick up the Lance Todd Trophy.

His coach Radford also had praise for Houghton, who made a try-saving tackle on Ben Currie with two minute remaining, adding: "He would not look out of place in the England team."

"Don't let him kid you he was not a worthy winner of the Lance Todd," Ellis said. "It was a hot, sapping day and when he put that 40-20 in (before Mahe Fonua's try) you could see some Warrington heads drop.

"Warrington were the better team for 60 minutes, but Marc has been quality with his kicking all season and he produced it when it mattered. He was superb."
Reactions: 1 user

Good to see Carlos Tuimavave in the winners circle. Iafeta was stoked too...
Reactions: 1 users

Leigh have now beaten two Super League teams in the qualifiers - surely they will go up without having to play in the 4th vs 5th decider???

Leigh will be promoted tomorrow if they beat Huddersfield.

Salford look to be going the other way.

Imagine how nuts Marwan Koukash would be if Salford get relegated. Spending all the money on the club and looks like a little on the side extras around the cap, heavily recruited and the results on the field the last few years have been poor.

At least our team gets our hopes up for a little bit first before tearing our hearts out Temple of Doom style.
Reactions: 1 user

snake77 said:
Imagine how nuts Marwan Koukash would be if Salford get relegated. Spending all the money on the club and looks like a little on the side extras around the cap, heavily recruited and the results on the field the last few years have been poor.

At least our team gets our hopes up for a little bit first before tearing our hearts out Temple of Doom style.
Click to expand...

From what Ive been told the guy is a complete fuckwit. He's always at the stadium and undermines the coach all the time. Prone to putting players on blast and thinking his money can buy him a Premiership. One day the guy will get caught for all the envelopes he hands players under the table and over the cap...

Hasn't he already been done for cheating the cap? I haven't looked into it too much but remember reading something about it and he was complaining about the RL being small minded and he wanted to take his toys and head home.

I remember when Luke Patten signed with Salford there was an article about the amount of money being pumped into the club and the new stadium. I can't recall if it was before or after Crazy Koukash or not.