Some international rugby league news: Wales based English Super League club, The Crusaders, have withdrawn from the Super League competition from 2012 onwards, leaving many UK and Australian rugby league players with no club for next season.
Click to expand...

Shit thats big news, but maybe not suprising news. Did they have a decent centere?

And Michael Witt and a whole lot of others that no one else wanted. It's a bit like back at school when your the last guy picked, ah the painful memories

Bronco's should sign Witt. Could replace Lockyer with worse, to be honest.

Sucks to be a crusaders fan/player, aren't they a new team? Be some cheap players around

“He can cover a lot of positions, we’re just looking for someone to back up what we’ve already got,”

“He would be outside our top 25. He’s not someone we’ve gone out and targeted to fill a position."

I'm gutted about whats happened with the Cru. Not surprised though given the owners and the tangled setup they are involved with. The Crusaders, Wrexham FC andf the Race Course ground are all owned by a company called The Village Green. Village Green are run by jokers called Moss and Roberts. Wrexham FC are seriously in debt. The Race Course ground is in need a serious money to bring it up to speck. The Kop end of the ground been closed for a number of years because it is so badely run down.
The Village Green has been trying to sell the ground for a while now, add to that the soccer team are sucking large amounts of money and with the Crusaders not breaking even as they did last season (only averaging around 3500 per game) something had to give and it was the league club that went.
Pity of it is that if the club hadn't gone into administration at the start of the season due to the debts racked up by the Village Green then the Cru don't lose 4 points at the start fo the season and same team that made the play offs in season 2010 probably make the play offs again this season and will have built on the crowds they got last season. What a waste of an oppotunity!

For anyone interested in what the Wrexham FC fans have to say read on:

Wakefield got in and Halifax missed out.

The RFL has today announced that the following clubs have been awarded three-year Super League licences for the seasons 2012 to 2014:
Bradford Bulls
Castleford Tigers
Catalan Dragons
Harlequins RL
Huddersfield Giants
Hull FC
Hull Kingston Rovers
Leeds Rhinos
St Helens
Salford City Reds
Wakefield Trinity Wildcats
Warrington Wolves
Wigan Warriors
The 13 clubs will join Widnes Vikings, who were awarded a licence in March as the successful Co-operative Championship club, in Super League from next season.
Licences were not issued to Crusaders, who withdrew their application, or to Championship club Halifax RLFC, whose application was assessed alongside those of the existing Engage Super League clubs.
The licences were announced at Old Trafford, Manchester, today, when RFL Chairman Richard Lewis revealed increases in the number of clubs receiving A Grade and B Grade licences.
“I am delighted to confirm that four clubs (Hull FC, Leeds Rhinos, Warrington Wolves and Wigan Warriors) have been awarded A Grade licences, one more than in 2008, and that five clubs (Bradford Bulls, Catalan Dragons, Huddersfield Giants, Hull Kingston Rovers and St Helens) have been awarded B grade licences, two more than in the last round of licensing,” said Lewis.
“As welcome as the improvements in grades are, it is just one element of proof that licensing is meeting its objectives of driving up standards.
“Other evidence includes the prolific talent development within Super League, in which 118 young British players have made their first team debuts, and the investment in facilities we are seeing at clubs like St Helens, Hull Kingston Rovers and Salford City Reds.”
Lewis said there will be no relaxation in the desire to drive up standards and has warned the clubs which have been awarded a C Grade licence that they cannot rest on their laurels.
“The RFL’s independent Board of Directors reserves the right to revoke any licence awarded for the period 2012 to 2014 if it feels a club is failing, or not fulfilling, its obligations to help the competition meet the objectives of investment and growth,” he said.
“This is not a new provision, but the RFL will be subjecting those clubs whose applications are largely predicated upon future undertakings or with variable performance against past promises, to more rigorous assessment during the next licence period. Membership of the Super League demands high standards.”
Lewis explained that the rigorous assessment process to which the licence application of every club is subjected had prompted the decision by Crusaders to withdraw their application.
“As part of the on-going scrutiny applied by the thoroughness of the licensing process Crusaders decided to withdraw their Licence application,” he said. “The RFL will now enter into discussions with Crusaders regarding their possible participation in the Co-operative Championship.
“Halifax have been unsuccessful in their Super League licence application and will continue to play in the Co-operative Championship in 2012 and I wish them every success.”
The final decision on the awarding of licences was made by the RFL’s independent Board of Directors following a detailed assessment process by the RFL Executive, who received valuable support from property consultants Savills, finance company KPMG and governance and business management experts at Leeds Metropolitan University.
The licence grades awarded for 2012 to 2014 are as follows (current licence grading in brackets):
B - Bradford Bulls (B)
C - Castleford Tigers (C)
B - Catalan Dragons (C)
C - Harlequins RL (C)
B - Huddersfield Giants (C)
A - Hull FC (A)
B - Hull Kingston Rovers (C)
A - Leeds Rhinos (A)
B - St Helens (B)
C - Salford City Reds (C)
A - Warrington Wolves (A)
C - Wakefield Trinity Wildcats (C)
C - Widnes Vikings (-)
A - Wigan Warriors (B)

the crusaders folding is bad really got to question the way esl is run some of these sides are a joke anything less than a B licence and you shouldnt be in a competition called super league... the top side are decent and compare with nrl leeds, hull, wigan, st helens, and bradford, warrington catalan, hull kr, huddersfield have all either been top sides or have the potential and crowd support to do so.

any team who cant draw 5,000 spectators on average per season shouldnt be in a super league... not to mention marketing plans bussiness plan and financial guarantees

How does the licence grading work?

Haha you've always had a thing for Sammut.

jr development, quality of stadium, location of club eg is there any other clubs in 50km of club, playing results and financial stability in the past.


there clubs in the super league that are unable to spend the full amount of there salary cap because the grant the get from tv money only cover 50% of wages.. so if they get low crowds and have poor corporate suppourt there pretty much doomed to struggle at the bottom of the ladder...


rugby league in wales will go on as they reportedly have 7,000 amatuer players and the scorpions in the lower semi pro league but this is definitly a big set back to the sport in wales.

the national side is in the 4 nations hopefully they are competitive and i suppose local juniors can still get contracts with other super league clubs just not with a welsh club!

does anyone know if esl is just going to be 13 clubs next year? 6months is real short notice to find a club up to scratch in playing strength with financial backing

ToiletDuck said:
Haha you've always had a thing for Sammut.

Who wouldn't? The man has the holy trinity of Cornrows, Thick Mustache and misspelt tattoo... 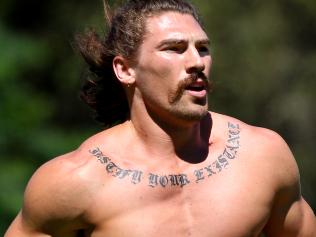 kiwi's 13-6 said:
does anyone know if esl is just going to be 13 clubs next year? 6months is real short notice to find a club up to scratch in playing strength with financial backing
Click to expand...

Just been reading that the Wrexham FC players haven't been payed for the last couple of weeks and that the Wrexham fans are arranging protests and have asked the Crusaders fans to join with them.
Moss and co have pretty much stuffed two clubs and killed professional sport in the north of Wales by the looks of things.
Show hidden low quality content
Share:
Share