Hardaker would have been a shoe in but for this:
https://www.theguardian.com/sport/2...-failed-drugs-test-rugby-league-england-squad He probably cost Cas the Super League title with his stupidity.

No Tomkins either which is less surprising

If you met Zak Hardaker, your likeliest first impression would be of a lovely lad who is endearingly honest about the mistakes he's made. The problem is that he keeps making those mistakes.

Despite his outstanding rugby league talents that were taking him to the very top in the game, his career is now defined by his wrong choices off the field.

Currently the best English full-back around and tipped to get even better, he will instead be remembered for missing the 2013 World Cup because of a boozy brawl on the eve of the tournament, being effectively kicked out by Leeds for a catalogue of off-field indiscretions and now missing a Grand Final and another World Cup for this latest catastrophic choice of behaviour.

It's incredibly frustrating to team-mates and fans that so much talent has been squandered. But he still has a chance for some redemption.

Without pre-judging any mitigating circumstances he may use in his defence, the probable outcome of this failed drug test is a two-year ban.

He turns 26 in a few days, so he is of an age where he could still return and perform at the highest level again. That depends on how well he is supported and mentored in the next couple of years, though both Leeds and Castleford have done their best in the past.

So more importantly it now comes down to the quality of his own decisions.

bruce said:
Just cannot see them performing away from home.
Click to expand...

All down to team spirit which is Bennetts department. I'd feel happier if Hardaker was at full back, he's been sensational this year and Lomax is no replacement for him. Hardaker seems determined to f**k his life up though.

Other than Kevin Brown who I don't rate, it's a strong squad

Hardyman's Yugo said:
No Tomkins either
Click to expand...

Signing for the Warriors as a big name = death of career post-Warriors
Reactions: Off The Bench, Swanley and W.A warrior

Stream for England warm up game here: https://www.rugby-league.com/englan...ing-xiii-confirmed-for-affiliated-states-game
It's a membership thing but free.

Kicks off at 22.45 NZ time, early lunch for us English grafting away!!
Reactions: mt.wellington

Bit of a walkover this. 22-0 after as many minutes
Reactions: mt.wellington

Defence said:
Didn't lomax have a mare.
Click to expand...

I would have picked Ratchford ahead of Lomax. Hardaker is a massive loss though, what a dickhead
Reactions: Defence

Hardyman's Yugo said:
I would have picked Ratchford ahead of Lomax. Hardaker is a massive loss though, what a dickhead
Click to expand...

Yeah thats a shame for u guys- he could've been the difference between winning and losing that game.
Now burgess has gone down too..... tbh I just don't think u have the depth there to cover key players.
It's a shame for the tournament as a whole.
Reactions: bruce and YeahNah 4020

Defence said:
Yeah thats a shame for u guys- he could've been the difference between winning and losing that game.
Now burgess has gone down too..... tbh I just don't think u have the depth there to cover key players.
It's a shame for the tournament as a whole.
Click to expand...

Reckon they'll still give the Kiwis a good test, usually the best game of the tournament. The eternal battle for the honour of being dicked by the Roos.
Last edited: Oct 29, 2017
Reactions: Spence, YeahNah 4020, Hardyman's Yugo and 1 other person

Worried2Death said:
Reckon they'll still give the Kiwis a good test, usually the best game of the tournament. The eternal battle for the honour of being dicked by the Roos.
Click to expand...

Barring more injuries the Kiwis will have them in the forwards. That was a hell of a performance last night by the Kiwis.
Toggle signature
Trainspotter
Reactions: YeahNah 4020 and Worried2Death

bruce said:
Barring more injuries the Kiwis will have them in the forwards. That was a hell of a performance last night by the Kiwis.
Click to expand...

It was a dominant performance by our middles in the end but England will play for 80 minutes and they have some very good forwards of their own.

I wouldn’t be too overawed by last night Bruce, some good performances by our debutants but that game played out largely as expected I thought.
Reactions: Swanley 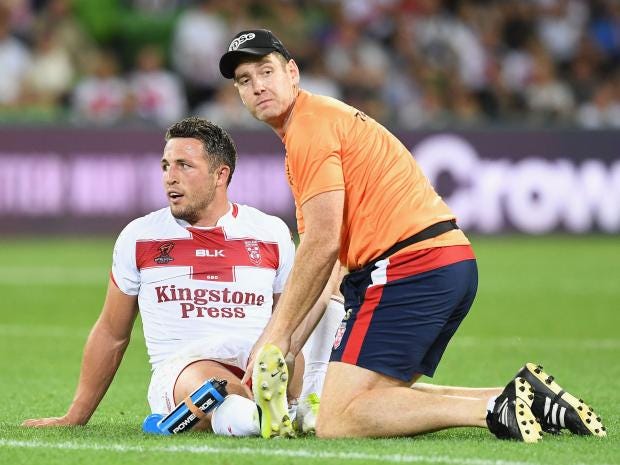 Sam Burgess will return sooner than expected from his injury Getty

Sam Burgess will be back from injury earlier than originally anticipated, England have announced.

The South Sydney forward was helped from the field with knee medial ligament damage 35 minutes into England's 18-4 defeat by Australia in their opening World Cup match in Melbourne on Friday.

England coach Wayne Bennett said in the post-match press conference that he expected Burgess to be sidelined for three or four weeks but a spokesman said on Saturday: " Following a further review of the injury, England medical staff and specialists can confirm Burgess will be back in the playing squad earlier than anticipated."

Burgess watched the second half of Friday's game from the dug-out with his knee in a brace and was sent to see a specialist before the team flew out of Melbourne. 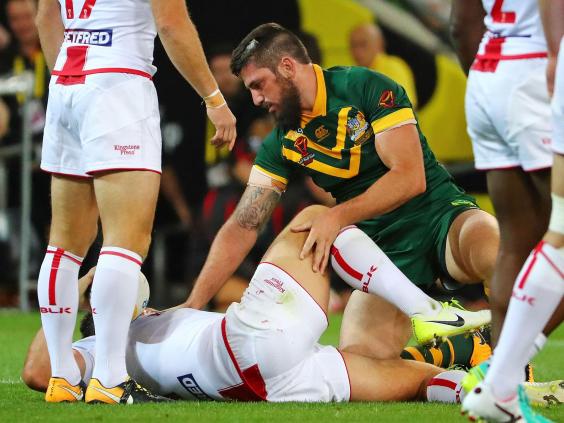 The latest news is a significant boost for England as they seek to bounce back from their opening defeat by the Kangaroos.

Although Bennett was delighted with the way his side coped in the absence of Burgess in the second half at AAMI Park, his likely availability will be welcomed as England eye a potential quarter-final against Papua New Guinea, followed by a semi-final against New Zealand in Auckland.

Bennett said: "It was a blow to lose Sam so early in the game against Australia but the team coped and competed against the number one side in the competition.

"He'll be a loss but we expect to see him back soon in the next few weeks and pushing for a place in the squad as we aim to make the quarter and semi-finals.

"Sam's a tough player and he will be doing everything required of him to get fit again. We've got a good team here and everyone is behind each other, on and off the field."

Ben Currie replacing Sam Burgess in the second row for the weekend. Top young player imho, I would have been tempted to have him as centre against Australia before Bateman who I think is a bit lightweight at this level. Looks like Bennett sees Lomax as his full back as well which surprises me

I like watching England's forwards, they are good, however I think the issue is it's always the same players being picked and your always getting the same result.

Unfortunate England do not play like they do in the ESL, expansive!
Toggle signature
President - Doom Squad
Reactions: Off The Bench, YeahNah 4020 and eudebrito

England just couldn't adjust to Lebanons rush defence which is a worry.
Playing Roby at acting half back is an absolute must, he'd get behind a defence like Lebanons and we missed him a lot.


As for the 'biting' incident, no way. Farah pulled his forearm into McGillvary who doesn't make any bite movement with his jaw, Farah (who whinged to the ref a lot) ran to the ref to complain.
Last edited: Nov 7, 2017

Burgess is fit for Sunday apparently. Full team is:

Escaped by a whisker there England.
Played a great game. Widdop's on fire at fullback.
Take it to the Roos boys!
Reactions: Weno
Show hidden low quality content